The Diesel Price hike which has  come unexpected and the extension of QE by the Fed Reserve has set the stage for a gap up opening today. We are all set to see a strong gap up opening and the key would be to see if the Markets sustains the opening gains and capitalizes on strong opening further during the day.

Today's opening will have the Markets open above its resistance levels of 5448-5455. Next resistance on charts are at 5498-5500 levels. This too is a major pattern resistance.

The RSI--Relative Strength Index on Daily Chart is 64.6302 and it has reached its highest value in last 14-days which is bullish. The Daily MACD trades above its signal line.

Having said this, it is important to note that the QE - Quantitative Easing would be cheered by the global markets but it has been good for India only for short term. If we take a medium term view, the result of influx of funds have caused macro economic concerns fueling inflationary concerns. This may desist RBI from announcing immediate rate cuts on this Monday's monetary policy review.

Further to this, on the contrary, Markets are likely to cheer diesel price hike more as this is seen as a bold move towards fiscal consolidation. The Markets will also see if there are no rollback pressures and if they are, the Centre does not relents to such pressures.

All and all, positive session ahead. Selective purchases may be made and wherever profits are available, they should be protected at higher levels.  Overall, positive outlook is advised for today.
Milan Vaishnav,
Consulting Technical Analyst,
www.MyMoneyPlant.co.in
http://milan-vaishnav.blogspot.com
+91-98250-16331
milanvaishnav@mymoneyplant.co.in
milanvaishnav@yahoo.com
Posted by MyMoneyPlant.co.in at 9/14/2012 08:48:00 AM No comments: 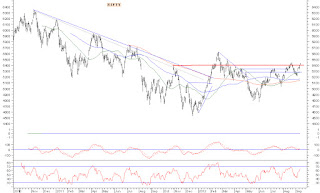 Today, we can expect the Markets on a flat to mildly negative note and consolidate after five days of gains. The Markets are not yet out of its filter of resistance levels of 5400 and they are still below its double top resistance of 5448-5450 and thus, can consolidate or mildly correct from these levels. The intraday trajectory would continue to remain critically important.

The RSI—Relative Strength Index on the Daily Chart is 64.2480 an it has reached its highest value in last 14-days which is bullish. However, it does not show any bullish / bearish divergence. The Daily MACD continues to trade above its signal line. The volumes have remained bit higher than the average.

The NIFTY and Stock futures have continued to add nominal open interest and the NIFTY PCR now stands at 1.06 as against 1.01. The another external even that global markets look forward to is the announcements from Fed Reserve coming up tonight.

However, so far as technical factors go, the Markets are likely to consolidate / mildly react at these levels. In such case, at this point, aggressive long positions should be avoided and selective approach should be maintained as only selective outperformance would be seen until Markets achieves a full break out on the upside. Volatility shall stay and occasional profit taking bouts cannot be ruled out. Careful outlook is advised for today. 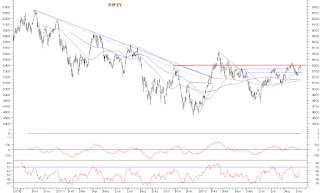 The levels of 5410 and 5448 are immediate resistance levels on the Charts.

The RSI—Relative Strength Index on the Daily Chart is 60.5137 and it shows no failure swing. But the NIFTY has set a new 14-day high but RSI has not. This is BEARISH DIVERGENCE. On the other hand, the Daily MACD has reported a positive crossover and it now trades above its signal line. This is a contradictory reading.

Further to this, Markets have react to the IIP numbers coming out today, which are expected to be mildly positive. Again, on the  other hand, the possibilities of immediate Petrol and Diesel price hike have been ruled out by the core committee. This is again a negative.

So, there are contradictions to react to on the technical charts as well as the externals. So, the key would be to see if the Markets moves past the resistance zone of 5410-5448 or it again consolidates and gives up later.

All and all, given these contradictions, there are chances of Markets remaining volatile over and above being in a range. Though shorts may strictly be avoided, occasional bouts of some minor profit taking cannot be ruled out. Aggressive buying too should be avoided while vigilantly protecting profits. Overall, cautious outlook is continued to be advised for today. 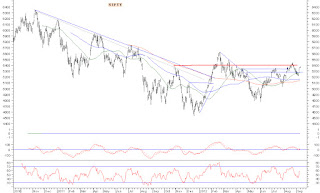 Today also, we are likely to see a modestly negative opening as the Markets might consolidate or show some little profit taking after closing into green since last four sessions. In even of consolidation, intraday trajectory would be critically important and so will be the Market breadth and the volumes.

The levels of 5400 would continue to pose as immediate pattern resistance with supports coming in at 5330 and 5305.

The lead indicators do not point and directional trend. The RSI—Relative Strength Index on the Daily Chart is 57.8675 and it is neutral as it shows no bullish / bearish divergence or failure swings. The Daily MACD continues to trade below its signal line.

Given this reading, we are once again likely to see a range bound session again with no directional trigger. Consolidation might continue and this is likely to keep the Markets range bound and bit volatile.  Baring a minor correction for a day or two, the overall bias remains upside with the 5400 acting as immediate major pattern resistance. While avoiding shorts, profits too should be protected at higher levels. Overall, cautious outlook is advised for today. 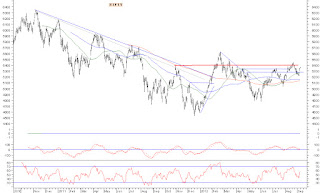 Today, expect the Markets to open on a flat to mildly positive note and look for directions. Technically speaking, Markets are expected to open positive as continue with its up move as they have ended the previous session near the high point of the day. Thus, positive opening can be expected but intraday trajectory would equally be important.

For today, the levels of 5380 and 5400 would continue to pose immediate resistance to the Markets.

The NIFTY and Stock Futures have continued to add in net Open Interest.

All and all, mildly positive bias can be maintained. The levels of 5400 will continue to pose immediate resistance and thus, continuation of selective approach in the Markets is advised along with protection of profits at higher levels. Shorts should be avoided. Overall, positive approach with tinge of caution is advised for today.