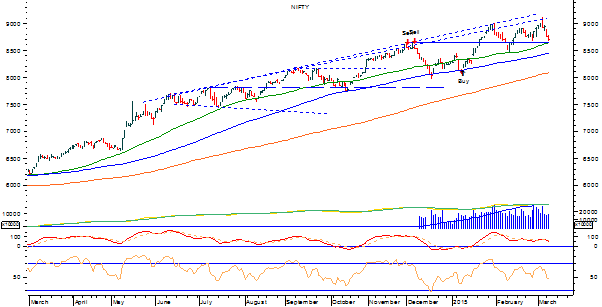 MARKET TREND FOR WEDNESDAY, MARCH 11, 2015
Markets stand at a very critical juncture as of today. Though the Global Markets remain subdued, we can once again expect some stability in our Markets today. Expect the Markets to open on a flat to mildly negative note and look for directions. The Markets currently trade above its important support levels. In event of any temporary weakness, these levels may be tested and even if they are not tested, the volatility will remain ingrained in the Markets, at least for the immediate short term.

The RSI—Relative Strength Index on the Daily Chart is 46.3062 and it has reached its lowest value in last 14-days which is bearish. Also, RSI has formed a fresh 14-period low while NIFTY has not yet and this is Bearish Divergence. The Daily MACD continues to remain bearish trading below its signal line.

On the derivative front, NIFTY March futures have shed over 2.06 lakh shares or 0.83% in Open Interest. This certainly signifies some further unwinding of positions but at the same time, this relatively small.

Coming to pattern analysis, the Markets currently continues to trade above all the 3 moving averages and above is important pattern support levels as well. Further, NIFTY has pared nearly 400-odd points from its peak. However, it continues to keep its overall up trend intact as it has not yet the rising channel that it has been trading in. The important support comes in at 8640-8600 levels and it would be important to review the behaviour of the Markets around these levels in event of any temporary weakness.

All and all, we can expect some stability to come in but in any case volatility would continue to remain embedded in the Markets in the immediate short term. We continue to reiterate our advice on curtailing exposures at moderate levels. More emphasis should be laid on protecting profits at higher levels. With keeping focus on maintaining adequate liquidity, cautious outlook is advised or the day. 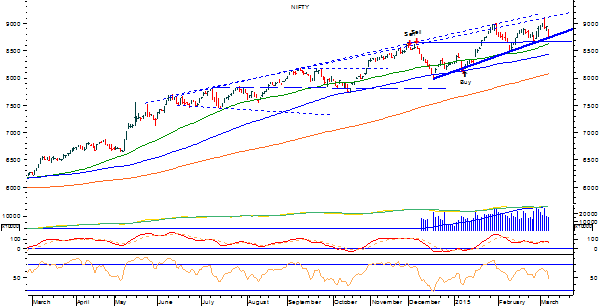 MARKET TREND FOR TUESDAY, MARCH 10, 2015
Markets are expected to see a flat to mildly positive opening today and there are chances that we see some stability returning to the Markets. The Markets have ended the day yesterday near one of the pattern supports and the opening levels of the Markets and the intraday trajectory that it forms thereafter would be critically important for the Markets. If the Markets opens and drifts lower, then the possibility of the Markets testing the levels of 8640 cannot be ruled out. However, stability in the initial trade is expected.

The RSI—Relative Strength Index on the Daily Chart is 48.7251. It has reached its lowest value in last 14-periods which is bearish. The RSI has set a fresh 14-period low whereas NIFTY has not yet and this is bearish divergence. The Daily MACD is bearish as it now trades below its signal line.

On the derivative front, the NIFTY March futures have shed over 10.66 lakh shares or 4.09% in Open Interest. This clearly suggests unwinding of long positions. The NIFTY PCR stands at 0.92 as against 0.98 a day before.

Coming to pattern analysis, the Markets have reacted sharply after touching its upper rising trend line. However, even after yesterday’s downside, the Markets still continues to remain in overall rising channel. Further, it has attempted to take support at a minor rising support line. We can expect to see some stability coming in here. However, if the Markets see some more weakness, the possibility of the Markets testing the 50-DMA OR the 8640 levels cannot be ruled out. However, even if these levels are tested, the Markets would continue to remain in broad consolidation zone.

Overall, the Markets continue to remain in broad consolidation / corrective range. Today as well, though we can see some stability returning to the Markets, runaway pullback may not be expected. Volatility too would remain ingrained in the Markets. While some fresh but very selective purchases may be made, we continue to reiterate to approach the Markets with caution while attempting to keep exposures at moderate levels. 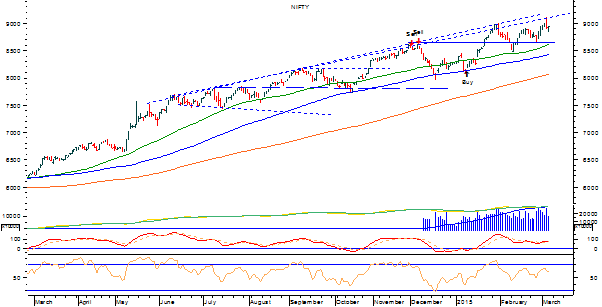 MARKET TREND FOR MONDAY, MARCH 09, 2015
The Markets would open today after a long weekend and they are likely to open on a lower note. Expect the Markets to open on a lower note today. The reason would be primarily weak technicals as the Markets have resisted to its upper rising trend line and another would be possibility of early rate hike from US. However, even with lower opening which is primarily because of weak technical factors will keep the overall trend intact as of yet.

The RSI—Relative Strength Index on the Daily Chart is 60.6341 and it remains neutral showing no bullish or bearish divergence or failure swings. The Daily MACD remains bullish as it is  trading above its signal line.  On Candles, A bullish harami occurred (where the current small white body is contained within an unusually large black body).  During a downtrend this pattern implies an end to the decline as the bears appear to have exhausted themselves. During an uptrend (which appears to be the case with NIFTY) the bullish harami pattern is bearish as the bears appear to be gaining strength as the bulls weaken. However, this needs confirmation.

On the Weekly Charts, Weekly RSI is 69.2644 and it does not show any failure swings. However, NIFTY has formed a fresh 14-period high whereas Weekly RSI has not and this is Bearish Divergence. The Weekly MACD remain bullish trading above its signal line.

On the derivative front, NIFTY March futures have further shed over 8.09 lakh shares or 3.01% in Open Interest. This signifies reduction / unwinding in positions and also some short covering from lower levels on Thursday.

Coming to pattern analysis, apart from news flow of sooner-than-expected rate hike from US, the pattern analysis clearly suggests the Markets to see some correction and broad consolidation at current levels. On the Daily Chart, it has resisted to the upper rising trend line at 9119 which is even bit higher today. The same has been the case on Weekly Charts as the Markets have resisted to the upper rising trend line. It would be completely fine and acceptable that the Markets see some mild paring of gains and broad range bound consolidation from here on. Even if it does so, it would keep its original uptrend intact.

Overall, we continue to reiterate to refrain from over exposure in the Markets. All up moves in the Markets from hereon should be used to protect existing profits and positions. Stock specific performance would continue as we will see good quality midcaps outperforming. Sectoral out performance will also be seen. Overall, cautious outlook is advised for today.