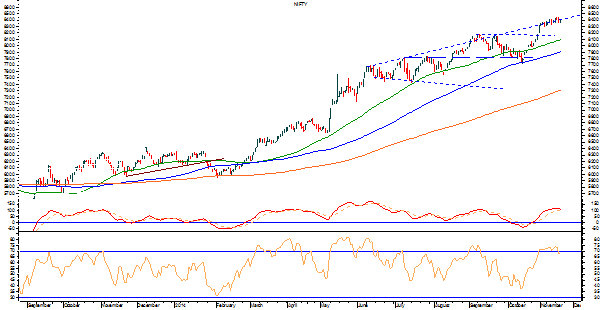 Due to the Markets severely consolidating in a sideways trajectory, the analysis continues to remain on the similar lines. The Markets can once again see a quiet opening and we can continue to see the Markets trading in a ranged manner with some amount of volatility ingrained in it. The intraday trajectory continues to remain critical with the levels of 8455 acting as immediate resistance.

The RSI—Relative Strength Index on the Daily Chart is 68.6569 and it is neutral as it shows no bullish or bearish divergence or any kind of failure swing. The Daily MACD continues to remain bullish while trading above its signal line. On Candles, A hanging man occurred (a hanging man has a very long lower shadow and a small real body).  This pattern can be bullish or bearish, depending on the trend.  If it occurs during an uptrend (which appears to be the case with NIFTY) it is called a hanging man line and signifies a reversal top

On the derivative front, NIFTY November futures  have further shed over 5.73 lakh shares or 2.61% in Open Interest. This signifies short covering from higher levels being observed in the Markets.

Going by the pattern analysis, the Markets have continued to move in sideways trajectory after attempting a breakout. On the Weekly Charts, it has continued to resist to the rising upper trend line of a broadening formation. On the Daily Charts, therefore, the Markets are showing some signs of immediate short term weakness.

Given this reading, the Markets are likely to continue to consolidate sideways trajectory in a ranged manner with a mild downside bias. Under such circumstances, the approach of very vigilantly protecting profits at higher levels should be continued. Fresh purchases in defensives can be made as some sectoral out performance would be seen but this should be done extremely selectively. Overall, continuation of cautious approach is advised for the day. 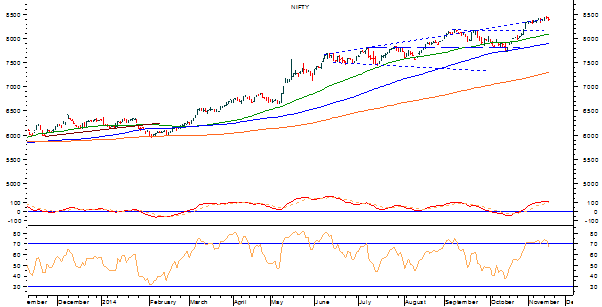 As it was widely expected due to the overbought nature of the Markets, it did not give any runaway rise and instead saw some selling pressure from higher levels. Again, expect the Markets to open on a quiet note and look for directions. Chances of further consolidation still remains significant given the technical structure of the Daily Charts. Volatility too would remain ingrained in coming sessions.

The Relative Strength Index on the Daily Chart is 67.4358 and it has just crossed below its topping formation which is bearish. It is otherwise neutral as it shows no bullish or bearish divergence or any failure swing. The Daily MACD continues to remain bullish as it trades above it signal line.

On the derivative front, the NIFTY November futures have shed over 6.24 lakh shares or 2.76% in Open Interest. This clearly signifies that there has been some unwinding of long positions from higher levels.

All and all, looking at the technical charts and also taking a cue from pattern analysis, we may continue to see some selling pressure from higher levels. However, this would be range bound consolidation as the undercurrent continues to remain buoyant as the Markets have been showing good amount of resilience. However, the policy of continuing to protect profits at higher levels and selective buying while maintaining liquidity is advised for the day. 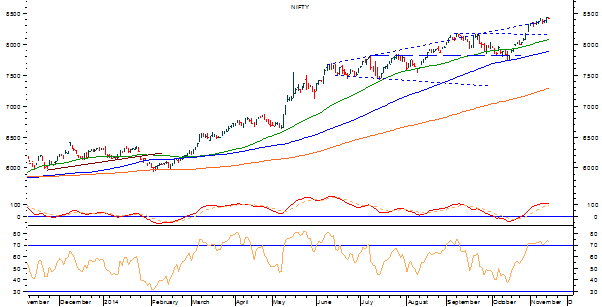 Though the Markets are displaying phenomenal strength, it is fiercely consolidating in sideways trajectory. Given this, we can once again expect a quiet opening in the Markets and expect the Markets to consolidate in a ranged manner. In event of any up move, pressure from higher levels cannot be ruled out and therefore, the analysis continues to remain more or less on similar lines.

The RSI—Relative Strength Index on the Daily Chart is 73.3372 and it is neutral as it shows no bullish or bearish divergences or any failure swings. It also continues to trade in “overbought” territory. The Daily MACD continues to remain bullish while trading above signal line.

On the derivative front, NIFTY November futures have over 1.94 lakh shares or 0.85% in Open Interest. This suggests some minor reduction of long positions and some amount of profit taking.

Going by the pattern analysis, as we have been mentioning in our previous editions of Daily Market Trend Guide, the Markets have been fiercely resisting to the upper rising trend line of the broadening formation, which is seen more clearly on Weekly Charts. Usually in such circumstances, the Markets can witness some sharp profit taking bouts from higher levels even if the under current certainly remains buoyant.

All and all, under such technical structure, it is advised to approach Markets on a very cautious note. It is very strongly recommended to keep overall exposure limited and cash should be preserved. Though purchases may be made, but it should be done on highly selective basis. Overall more emphasis should be laid on protecting profits at higher levels as profit taking bouts from higher levels cannot be ruled out. Overall, continuance of cautious approach is advised for the day.

Due to a technical glitch we have not been able to publish regular edition of Daily Market Trend Guide in PDF Format. However, we reproduce Brief Market Forecast for the Day below. Inconvenience caused is sincerely regretted.
BRIEF MARKET FORECAST FOR THE DAY, TUESDAY, NOVEMBER 18, 2014

The Markets have attempted a breakout yesterday but today, we can expect a flat to mildly positive opening. Though the breakout has been attempted, it is yet to get confirmed today. The Markets have very strong undercurrent but given the overbought nature of the Markets some degree of volatility and chances of some profit taking bouts from higher levels cannot be ruled out.
Overall, the the undercurrent, as mentioned above, certainly remain buoyant. However, some volatility would remain ingrained in the Markets. With each up move, higher degree of caution needs to be exercised while protecting profits very vigilantly at higher levels. 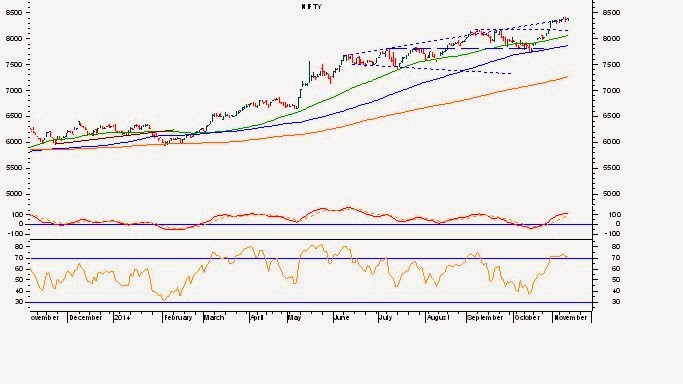 Markets have been severely consolidating as very clearly evident from the Daily Chart and have been trading sideward displaying great amount of underlying strength. The Markets may again see a quiet opening again and it is likely to consolidate at higher levels and therefore the overall analysis would continue to remain on similar lines as the Markets continue to remain mildly overbought as well.

The RSI—Relative Strength Index on the Daily Chart is 72.0093 and it does not show any failure swing. However, the NIFTY has formed a fresh 14-period high while RSI has not and this is Bearish Divergence. It also trades in “overbought” territory. The Daily MACD although continues to remain bullish trading above its signal line. On the Weekly Charts, the Weekly RSI is 71.5658. It also shows a Bearish Divergence as NIFTY has formed a fresh 14-Week high but Weekly RSI has not while trading in “overbought” territory as well. Weekly MACD remains bearish as it trades below its signal line.

On the derivative front, the NIFTY November futures have shed 2.52 lakh shares or 1.09% in Open Interest.

Going by the pattern analysis, though the Daily Charts shows a prolonged formation, the Weekly Charts show a very classical Broadening Formation. With the ever rising upper trend line on both Daily and Weekly Charts, the Markets are not giving a clear breakout on the upside. As we have mentioned in our previous editions of Daily Market Trend Guide, such broadening formations are least useful patterns in achieving breakout as the breakout levels keep rising every day with the rising upper trend line which clearly diverges with the lower demand line. Also, the fact that the Markets continue to remain “overbought” also poses technical chances of the Markets consolidating at higher levels.

All and all, due to the present technical structure of the Charts, though the undercurrent remains extremely bullish, the Markets may continue to consolidate at higher levels. Runaway rise may not be seen because of the technical reasons mentioned and we may see the Markets forming a fresh area pattern before it breaks out on the upside. Given this reading, it is advised to continue to make selective purchases while paying equal or even more attention to protecting profits at higher levels. Overall, positive caution is advised for the day.