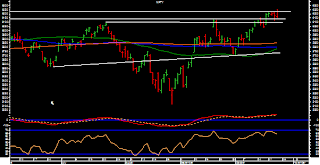 MARKET TREND FOR TODAY
The Markets came off nearly 90-odd points from day’s high yesterday as the zone of 6230-6250 held out fiercely as resistance.  Today as well, expect the Markets to open on a negative note and continue with correction, at least in the initial session. The intraday trajectory would be important to determine the trend for today but overall, the Markets are expected to trade with corrective bias.
The levels of 6230 and 6250 would continue to act as immediate and important resistance for the Markets. The supports come in lower at 6110 and 6075 levels.
The RSI—Relative Strength Index on the Daily Chart is 63.9296 and it has reached its lowest value in last 14-days which is bearish. The Daily MACD continue to trade bullish, above its signal line. On the Candles, the Chart shows possibility of a formation of a top which might indicate a reversal. A doji star occurred (where a doji gaps above or below the previous candle).  This often signals a reversal with confirmation occurring on the next bar. Also, A long upper shadow occurred.  This is typically a bearish signal (particularly when it occurs near a high price level, at resistance level, or when the security is overbought).
On the derivative front, NIFTY October futures have further shed over 3.47 lakh shares or 1.98%  in Open Interest. This showed that unwinding of long positions continued and some reduction in longs is seen.
Given the above reading, going by both pattern analysis and the F&O data, it is absolutely evident that the resistance zone of 6230-6250 has held out very strongly to the extent that it has become a immediate top for the Markets. No up move shall occur until the markets move past these levels and until this happens, as mentioned in our yesterday’s edition, the Markets would trade in a broad trading range with some volatility ingrained in it with a negative bias.
All and all, in such circumstances, it is advisable to refrain from creating aggressive positions on either side. However, since the Markets are in corrective mode, any downside should be utilized to make selective purchases. Overall, approaching Markets with cautious optimism is continued to be advised. 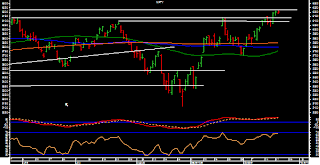 The analysis for today remains more or less on similar lines. The levels of 6230 have continued to pose major resistance to the Markets and today as well, it would continue to do so. Today, expect the Markets to open on a flat to modestly positive note and look for directions. To the most likelihood, the consolidation in the Markets would continue and profit taking from higher levels cannot be ruled out.

The RSI—Relative Strength Index on the Daily Chart is 67.6056 and it is neutral as it shows no bullish or bearish divergence or any kind of failure swings. The Daily MACD continues to trade above its signal line.

On the derivative front, the NIFTY October futures have continued to shed another 2.17 lakh shares or 1.17% in open interest. This suggests that amid the consolidation that we have been witnessing, there is been minor offloading taking place as well.

Going by the pattern analysis, it is very clearly evident from the Daily Charts that the Markets have continued to resist at the key resistance zone of 6230 and 6250 and will have to move past this zone for a further sustainable up move. In other words, no up move shall until occur until these levels are breached on the upside. Until this happens, we would continue to see consolidation and ranged trading sessions with a downward bias.

All and all, it is likely that the Markets continue to remain in a consolidation state and might continue to see minor profit takings. However, driven by results, some selective out performance might be seen in certain sectors. Given this, shorts should be avoided and very moderate purchases may be made with more concentration on protecting profits at higher levels. Continuance of cautious outlook is advised for today. 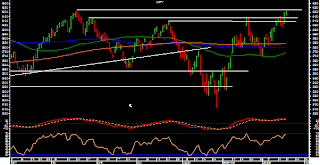 The resistance zone of 6230-6250 have held out yesterday as the Markets have failed to move past these levels. Today as well, the Markets are likely to open on a modestly negative note and continue with its corrective / consolidation activity and the levels mentioned would continue to act as key resistance zone.

The RSI—Relative Strength Index on the daily charts is 67.8025 and it has reached its highest value in last 14-days which is bullish. It does not show any bullish or bearish divergence. The Daily MACD continues to trade above its signal line.

On the derivative front, NIFTY October futures have shed a nominal 3.11 lakh shares or 1.65% in Open Interest. This show some minor shedding of long positions and some unwinding at higher levels as well.
Going by the pattern analysis, it is very clear, as evident from the charts that the Markets have resisted at their key resistance levels of 6230-6250 and until these levels are breached there would be no sustainable up move in the Markets. Also, until these levels are  breach, on the similar lines, they would  continue to act as key resistance zone for the Markets.

All and all, it is very much likely that the Markets opens negative and continue with its corrective activities at least in the initial trade. Long positions should be taken very selective as selective sectoral out performance would be certainly seen. Aggressive positions and over exposure along with shorts should be avoided. While keeping an vigilant eye on profits at higher levels, cautiously positive approach is advised for today. 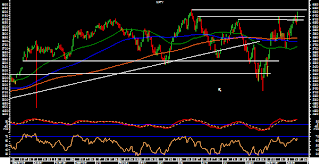 The Markets have moved past the critical resistance zone of 6130-6150. Today as well, they are likely to open on a mildly positive to flat note. Any positive opening would take the Markets to its very major resistance level of 6220-6235 zone. It is very likely that the Markets see some profit booking from these levels.

The RSI—Relative Strength Index on the Daily Chart is 67.1580 and it has reached its highest value in last 14-days which is bullish. It does not show any kind of bullish or bearish divergence. The Daily MACD continues to remain bullish as it trades above its signal line.

On the derivative front, NIFTY October futures have shed over 4.17 lakh shares or 2.17% in Open Interest. This shows that some amount of shedding of open positions, or some profit booking has been witnessed at higher levels.

Given the pattern analysis on the Daily Charts, it is likely that the Markets open positive but that opening would cause the Markets to open near its very important and major resistance levels of 6220-6230 levels. The likelihood of the Markets seeing some consolidation / profit taking from these levels is more because if the Markets go ahead and breach these levels as well, it would turn overbought and the rise would get somewhat unhealthy. Even if the lead indicators are analysed, they shows the chances of some bearish divergences occurring in the next few sessions to come.

Overall, given the above reading, there are chances that the Markets see some amount of profit taking from higher levels. If the Markets continue with its up move, the rise would get little unhealthy and we would advise retail investors to refrain from any aggressive buying and continue to protect profits on existing positions at higher levels. Overall, positive caution is advised for today.