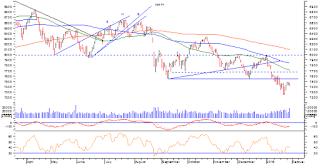 MARKET TREND FOR FRIDAY, JANUARY 29, 2016
The Markets have ended the series with a net loss of over 6.6% this month and has been the worst month in recent past. Today, we once again continue to keep the analysis on similar lines. The Markets are expected to open on a flat note and look for directions. The Markets have been trading in a capped range and has been consolidating post a pullback from recent lows. It is important that the Markets now built up on this consolidation and continue with its pullback in order to avoid any immediate weakness.

For today, the levels of 7480 and 7540 continue to remain as immediate resistance levels for the Markets. The supports come in at 7400 and 7365 levels.

The RSI—Relative Strength Index on the Daily Chart is 40.2615 and it remains neutral as it shows no bullish or bearish divergence or any failure swings. The Daily MACD still continues to remain bearish as it trades below its signal line.

On the derivative front, the NIFTY saw rollovers of 70.80% as against its 3-month average of 68.2%. The January futures have added over 39.29 lakh shares or 26.38% in Open Interest. There has been net addition in OI indication further addition of shorts in the Markets.

The Markets have been forming almost parallel bar on the Daily Chart and therefore the reading for short term pattern analysis remains on similar lines. After pulling back from 7250-odd levels, the Markets are now consolidating and if it continues to pullback, the next levels that it is expected to test are 7540. However, this being the major support that the Markets broke on the downside is expected to pose major resistance while on its way up. Overall, the Markets are pulling back after the breach of 7540 levels and so far shown no signs of a reversal. Though it has certainly attempted to find a bottom, reversal still needs to be confirmed.

Overall, the Markets continue to remain in a tentative state. The upcoming earnings continue to cause some sentimental damage to the Markets. The overall technical structure of the Markets continue to remain in immediate downtrend but since it has attempted to form a bottom and has been consolidating while adding good amount of shorts across the boards, shorting should be avoided in the immediate short term. We repeat and continue with our view of making very selective purchases and protecting the profits with every pullback that is seen. 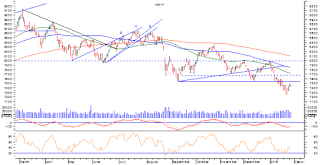 MARKET TREND FOR THURSDAY, JANUARY 28, 2016
Today’s analysis continues to remain similar on yesterday’s lines. The Markets are expected to open on a flat to mildly positive note and look for directions. Today is the expiry day of the current January derivative series and we will continue to see the trade remaining dominated with rollover centric activities. The Federal Reserve deciding to keep the key rates unchanged will help avoid the global volatility as it has kept off another rate hike in the near future.

The RSI—Relative Strength Index on the Daily Chart is 40.9258 and it has reached its highest value in last 14-days which is bullish. Also, the RSI has set a fresh 14-period high whereas NIFTY has not yet and this is Bullish Divergence.  The Daily MACD still continues to remain bearish as it trades below its signal line but is moving towards reporting a positive crossover.

Coming once again to pattern analysis, the Markets have attempted to find a base at 7250-odd levels and have pulled back since then. The logical pullback targets for the Markets should be 7540 levels, the level which it broke on its way down. This level of 7540 is likely to act as resistance for the Markets on its way up. It should be noted that even if we test 7500-7540 levels again, it would be a pullback of over 250-300 odd points but it would not yet amount to any trend reversal and we would continue to remain in the immediate downtrend. In normal course, the Markets should go on an consolidate at higher levels and move up again forming a higher bottom from the recent lows.

All and all, there remains a lot to be done by the Markets to confirm a bottom. Even if it logically advances higher, it would be just continuing with its pullback. However, with the Fed voicing concerns over missing inflation targets, tinge of weakness persisting in the economy, etc., indicates that they would keep off with the rate hike in near future and this would certainly aid Emerging Markets in general and India in particular. We continue to reiterate our advice of refraining from short positions and making selective purchases while maintaining positively cautious outlook on the Markets. 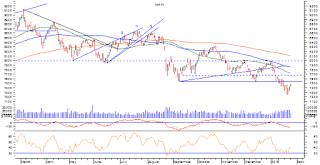 MARKET TREND FOR WEDNESDAY, JANUARY 27, 2016
The Markets will open today after a holiday yesterday on account of Republic Day. Today we are likely to see somewhat positive opening but the analysis would continue to remain same as that of Monday. It would be critically important to see if the Markets are able to build up on the possible positive opening today. Further, we enter the penultimate day of the expiry of the current series and the session is therefore likely to remain dominated with rollover centric activities.

The RSI—Relative Strength Index on the Daily Chart is 40.8150 and it remains neutral as it shows no bullish or bearish divergences of any failure swings. The Daily MACD remains bearish as it trades below its signal line. However, in coming sessions, if the Markets consolidate or puts up some gains, we can fairly expect a positive crossover.

Coming to pattern analysis, the Markets have attempted to find a bottom at 7250 levels after breaching the very important support of 7540. It becomes important to note that the Markets, if they continue to pull back, its logical levels where the pullback should be arrested is the 7540 levels.  The reason is that is level is likely to act as resistance as this was the major support that the Markets breached on the downside. Further to this, it also becomes important to note that even if the Markets manage to pullback up to the levels of 7540, it would still continue to remain in a overall downtrend. The pullback so far has not yet resulted into reversal of trend.

Overall, given this scenario, we continue to reiterate to avoid shorts and continue to make selective purchases. However, these purchases should be kept a moderate levels and any upside should be used to vigilantly protect profits. Overall, continuance of cautious outlook is advised on the Markets. 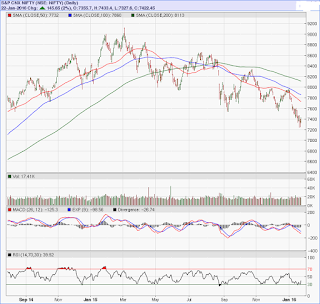 MARKET TREND FOR Monday, January 25, 2016
The Markets have ended near the high point of the day after a day of robust short covering on Friday. Speaking purely on technical grounds, the Markets are all likely to open once again on a modestly positive note and continue with its pullback at least in the initial trade. The markets have attempted to find a temporary bottom around 7250 and this level is likely to continue to act as a temporary bottom for the Markets. However, on its way up, the levels of 7540 will continue to post major resistance.

The RSI—Relative Strength Index on the Daily Chart is 39.92 and it remains neutral as it shows no bullish or bearish divergence or any failure swing. The Daily MACD continues to remain bearish as it trades below its signal line.

On the derivative front, the NIFTY January futures have shed over 10.63 lakh shares or 5.44% in Open Interest.  February series added OI but overall it remains evident that the rise that we saw on Friday can be squarely credited to short covering.

Coming to pattern analysis, the Markets slipped over 300-odd points after it breached its critical support levels of 7540. Thereafter, it has attempted to find a temporary bottom at 7250 and has since them attempted a decent pullback. However, it is important to note two things that the pullback that we have witnessed so far has been on account of short covering and the other thing is that even will pulling back, the Markets are likely to see stiff resistance near 7540 levels as this was the level it broke on the downside and would now act as an resistance.

Overall, some amount of short covering is likely to continue and we will see the Markets opening on a positive note. It would be good if the Markets are able to capitalize on the expected positive opening. However, more we move towards 7500 levels and up, we will see increased chance of some profit taking from higher levels. Also, we have a truncated week because of a Republic Day holiday tomorrow and therefore have just three sessions to expiry. While continuing to make select purchases, equal emphasis is advised to protection of profit at higher levels while adopting a positively cautious outlook for the day.