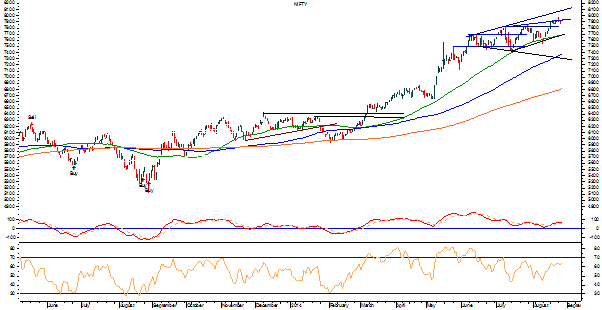 Tomorrow, we enter the expiry day of the current August Derivative series. The session is undoubtedly remain dominated with rollover centric activity and quite good amount of volatility is likely to remain ingrained in it. Further, the trend formation would continue to pose resistance but maintenance of levels above of 7910-20 range would leave some room for up side for the Markets though it would be equally dangerous as well.

The RSI—Relative Strength Index on the Daily Chart is 64.9322 and it has reached its highest value in last 14-periods which is bullish. It does not show any bullish or bearish divergence as such. The Daily MACD continues to trade above its signal line.

Going again to the pattern analysis, as mentioned often in our previous editions, the Markets continue to remain in broad range. There can be absolutely no doubt that such broad formation can be very early signs of the Markets topping out. It is evident by the volatility that is ingrained and also the small body of the trading sessions and narrowing market breadth also signals towards some exhaustion in the Markets. The Markets will continue to inch upwards so long as it stays above 7910-20 range but at the same time, very sharp reversal from any level cannot be ruled out.

Overall, with some immediate steam left, traders / investors can ride the Markets as it attempts to inch upwards so long as it stays above 7910-20 levels. But each such rise should be extremely cautiously dealt with as, just as mentioned earlier, sharp reversal from top cannot be ruled out. While maintaining extreme caution on the upside, controlled and moderate leverage is advised in the Markets. 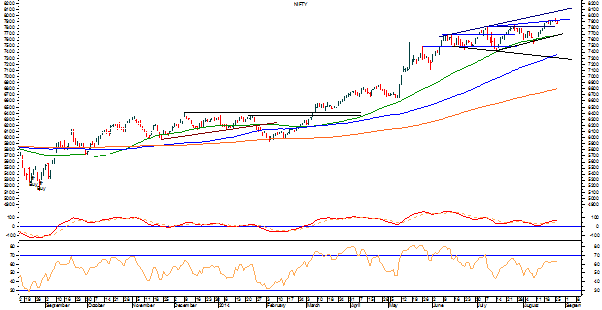 Tomorrow’s analysis continue to remain more or less on similar lines like today. The Market opening and its subsequent behaviour vis-à-vis the levels of 7910-20 zone would critically affect the trend. It would be necessary for the Markets to maintain levels above of this along with reasonable volumes in order to avoid any further pressure coming in. Over and above this, the rollovers too would dominate as we enter the penultimate day of expiry.

The RSI—Relative Strength Index on the Daily Chart is 62.9500 and it remains neutral as it shows no bullish or bearish divergences or any failure swings. The Daily MACD continues to remain bullish as it trades above its signal line.

On the derivative front, NIFTY rollovers continued as August series shed over 23.21 lakh shares or 18.09% in Open Interest while NIFTY September series saw addition of over 23.93 lakh shares or 56.93% in total Open Interest. The NIFTY PCR saw a negligible change over the previous day.

Taking a look at pattern analysis, again the reading remains more or less same like that of yesterday. The Markets continues to remain on broadening formation and within that it is resisting to a rising trend line inside that. The net effect is that the Markets will continue to consolidate in near term and in case of up move will not see a breakaway rise while it continues to remain in the  broad pattern.

Overall all, the Markets are continued to see a ranged movement with some amount of volatility remaining ingrained in it. Volatility would also be induced by rollovers as we are in the penultimate day of expiry of current series. Keeping this and other overall technical structure of the Markets in view, it is continued to be advised to avoid making over-purchases. Any up moves within the broad range should be utilized to protect profits at higher levels. Cautious outlook is continued to be advised. 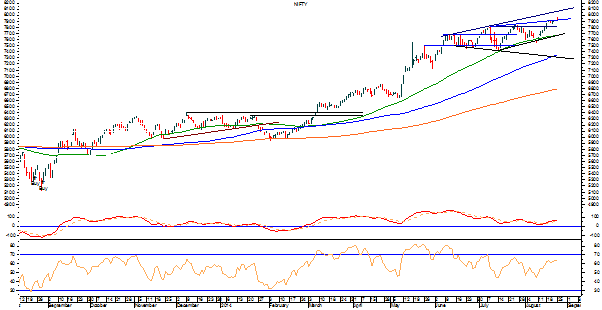 Tomorrow’s session is likely to be a acid test for the Markets. The opening levels would decide the trend for tomorrow as the Markets have failed to move past the rising trendline despite being in the broad formation. The maintenance of levels of 7925 and upwards would be necessary for the Markets to maintain its up move. However, being the expiry  week the rollovers would also dominate the Markets.

The RSI—Relative Strength Index on the Daily Chart is 63.1140 and it is neutral as it shows no bullish or bearish divergence or any failure swings. The Daily MACD too trades above its signal line.

Going back to pattern analysis, as mentioned in the yesterday’s edition of Daily Market Trend Guide, the Markets continues to remain in a topping out process and formation. Within that even if it sees such rapid advances, it would continue to see such corrective pressures as well. The Markets continues to trade within a specified range.

Overall, with the Markets under Broadening Formation, it would continue to see ranged and volatile movements. Even if we see short coverings or rollover centric advances or spurts the overall bias would still continue to remain on downside. While keeping purchases very limited any such rallies should be used to protect the existing profits. Cautious outlook is advised as any up move is likely to meet such corrective pressures. 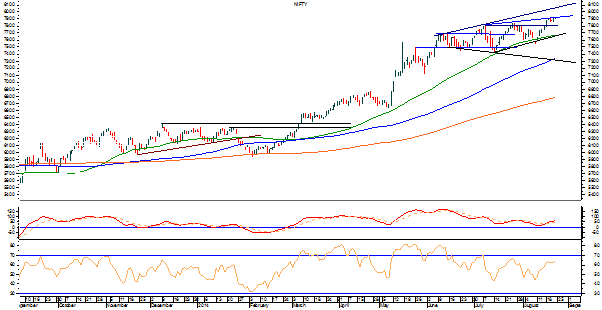 The Markets are likely to again see a ranged session tomorrow. The opening might be quiet but the Markets are overall in a topping out process. Even if the Markets continue to inch upwards the overall session is likely to be a ranged session capped on upside. The volumes have continued to remain below average and therefore a concern. The intraday trajectory and the volumes would continue to critically contribute to shape the direction of the Markets in coming days.

The RSI on the Daily Chart is 63.8013 and it has reached its highest value in last 14-periods which is bullish. However, it does not show any bullish or bearish divergences. The Daily MACD remains bullish as it trades above its signal line. On the Weekly Charts, the Weekly RSI is 69.5861 and has generated a sell signal. Though it does not show any failure swing, the NIFTY has set a fresh 14-period high while Weekly RSI has not. This shows a clear Negative Divergence on the Weekly Charts. The Weekly MACD, however, trades above its signal line.

On the Derivative front, since the expiry week begins tomorrow, no stand along numbers would directly throw any light. However, on Friday, the NIFTY August futures have continued to shed over 3.17 lakh shares or 2.16% in Open Interest. This showed unwinding of long positions in the and some short covering as well in the August series.

Once again, going by the pattern analysis, the Markets have continued to remain in a Broadening Formation which is usually seen during a topping out process. This means that the Markets are in the process of marking a top and this can happen any time. The characteristic of this is the declining volume that we have been witnessing in many of the NIFTY components. This means, even if the Markets continue to inch upwards, it would continue to do so declining or lower volumes and will not give any runaway rise. Any such runaway sharp rise should be suspected as buying climax.

All and all, we continue on the lines of the advisory that we issued during the entire last week. To reiterate, it is advised to continue to remain very moderate on positions and the profits should be monitored and protected very vigilantly on the higher side. Purchases should be restricted and made very selectively. Even if the  short term upward move continues, the overall bias remains towards some more consolidation or impending correction. Being watchful in the Markets is advised.