MARKET OUTLOOK FOR THURSDAY, MAY 04, 2017
Very much on expected lines, the Markets headed nowhere once again as the benchmark NIFTY50 ended the day on a flat note losing a nominal 1.85 points or 0.02%. The session remained in very narrow range and Markets continued to remain under classical consolidation. On Thursday, we expect NIFTY to continue to remain under consolidation and at the same time also continue to exhibit positive bias. No runaway rise is expected as Markets continue to deal with multiple pattern resistances. 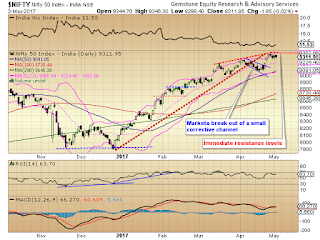 The Relative Strength Index – RSI on the Daily Chart is 63.6999 and remains neutral showing no divergences against the price. The Daily MACD still remains bullish while trading above its signal line. No significant formations are observed on Candles.

The pattern analysis continues to paint a buoyant picture. The NIFTY broke out from the corrective channel that it had formed after marking fresh highs. After breaking out from the corrective channel, the NIFTY is undergoing consolidation and is moving sideways. The fact that there is no major correction and retracement and just a sideways movement shows the buoyancy of the undercurrent.

All and all, we reiterate to avoid any fresh shorts as there are no signs of any reversal of trend. Also, there are no signs of any major downsides as well. However, we expect positive consolidation to continue and intermittent profit taking bouts will continue to exist. While remaining highly stock specific until a fresh high is marked by NIFTY, positively cautious approach is advised for the day.

MARKET TREND FOR WEDNESDAY, MAY 03, 2017
We had mentioned in our Tuesday’s note that with the signs of consolidation galore, the Markets are expected to trade volatile in a defined range and continue to consolidate. In line with this analysis, the benchmark NIFTY50 oscillated on either side after a good opening and ended the day with minor gains of 9.75 points or 0.10%. The Markets have put on display some clear signs of impending consolidation. On Wednesday, we might see a quiet opening once again and we see no triggers, technical of otherwise that can cause any runway rise in the Markets.

The Relative Strength Index on the Daily Chart is 63.9446 and it remains neutral showing no divergences. The Daily MACD stays bullish while trading above its signal line. On Candles, a candle with long lower shadow has occurred which closely resembles to a hanging man formation. Though this is not a classical hanging man the way it should be, but it still holds enough potential to push the Markets into some more consolidation.

All and all, we reiterate that there are no signs of reversal of the current primary uptrend. Despite this, there are ample signs that suggest the NIFTY will remain under consolidation for some more time. There are increased chances of volatility creeping in and we expect each up move to meet with intermittent profit taking bouts. We recommend keeping overall exposure on moderate levels until the Markets consolidates and prepares itself for another up move.

MARKET TREND FOR TUESDAY, MAY 02, 2017
Indian Equity Markets on Friday remained subdued as the benchmark NIFTY50 ended the day with modest losses of 38.10 points or 0.41%. Though it did come off from the lows of the day but still ended with mild negativity. On Tuesday, the Markets shall open after a long weekend and is expected to see some modestly negative opening. Activities are likely to remain subdued and Markets may take some breather despite the underlying current remaining buoyant. There are plenty of signs of a impending consolidation and virtually no signs of any kind of reversal of the uptrend. This may push Markets into some consolidation and sideways range bound movement for some time.

The Relative Strength Index – RSI on the Daily Chart is 63.2537 and remains neutral showing no divergences. The Daily MACD  is bullish while trading below its signal line. No significant formations are observed on Candles.

The pattern analysis depicts an interesting picture. As mentioned above, post breaking out from the corrective channel, the NIFTY broke out on the upside and after marking its highs, it taking some breather. The neutral to mildly consolidating lead indicators throw up plenty of signs that point towards Markets taking some breather and consolidating. On the brighter side, it shows no signs of any impending reversal of the current up trend.

All and all, with the underlying uptrend remaining absolutely intact, there are enough signs that show that Markets are likely to consolidate and take some breather. It is expected that NIFTY will consolidate in a defined trading range and while it does so, all sharp upsides will remain equally vulnerable to profit taking bouts from higher levels. It is advised that while keeping overall purchases limited and highly selective, profits should be protected at higher levels.

WEEKLY MARKET OUTLOOK FOR MAY 01 THRU MAY 05, 2017
The Indian Equities had much better-than- expected week as despite consolidation in the initial days, the benchmark NIFTY50 ended the week on a buoyant note putting on net gains of 184.65 points or 2.02% on Weekly basis. On expected lines, select out-performance was seen from MIDCAPS and BANKS, and some consolidation of performance was seen from AUTO. In the coming week, the picture is clear. There are all signs of consolidation on the Daily Charts and virtually no signs of any reversal of the primary uptrend on Daily or Weekly Charts. This translates into buoyant outlook in the coming week. We can expected a fierce consolidation with some volatility given the overbought nature of the Markets but no significant downsides are expected. 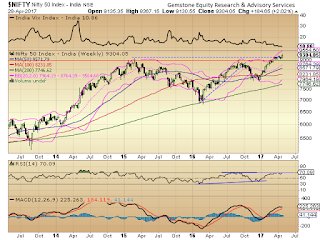 The Weekly RSI is 70.0947 and it is bullish as it has marked a fresh 14-period high though it is mildly overbought. The Weekly MACD continue to remain bullish as it trades above its signal line.

The pattern analysis on the Weekly Charts presents a buoyant picture. It shows the NIFTY resuming its up move again after a brief sideways consolidation after the main breakout from the triple top formation. However, given the overbought nature of the Markets on Weekly Charts and multiple pattern resistance on the Daily Charts, we may see the Markets spending some time in the broad range.

All and all, it is extremely important to note that though we may continue to see some intermittent profit taking bouts given the multiple pattern resistances that the Markets may encounter, there are no signs of reversal of the primary uptrend. We may also see some volatility creeping in over next week. However, all corrective actions should be contiued to utilized to make fresh purchases. The 45% wider-than-normal bands may not allow runaway rise for the NIFTY but the inherent structure of the Markets remain bouyant. 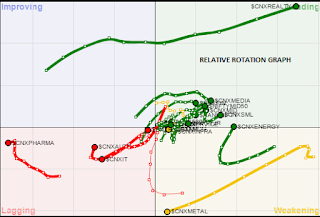 A study of Relative Rotation Graphs – RRG show that PSUBANKS and BANKNIFTY are significantly expected to further improve the relative out-performance with NIFTY. The AUTO Stocks and ENERGY universe is also expected to outperform. PHARMA is likely to continue to lag and METALS and IT Stocks are expected to remain weaker. Financial Services and MIDCAP universe will see pockets of select out-performance. INFRA and FMCG are expected to consolidate.

MARKET OUTLOOK FOR FRIDAY, APRIL 28, 2017
Markets headed nowhere as the benchmark NIFTY50 oscillated in a capped range much on expected lines to end the day with minor loss of 9.70 points or 0.10%. The expiry day remained quiet as no major swings were seen but profit taking still dominated the underlying sentiment. On Friday, a quiet opening is expected and this juncture, we wish to point out that currently the Markets are at their important and multiple pattern resistance and we can see some consolidation that can now last for a longer period. Though no major downsides are expected but we may see spending larger time consolidating in a capped and defined range.

The Relative Strength Index on the Daily Chart is 66.3548 and it remains neutral. The MACD is bullish while it trades above its signal line. An Engulfing Bearish line has occurred on Candles. This has potential to mark a temporary top the Markets and halt its present up move for a while. However, it needs confirmation.

The pattern analysis shows Markets resisting at a point that converges as a multiple pattern resistance. A rising trend line is drawn from the lows of December 2016 joining the troughs of the major primary upward rising channel. It presently stretches to the current levels of the NIFTY as evident from the Charts. It may so happen that the Markets may see itself moving in sideways trajectory for some time, gather strength and move up again.

All and all, as mentioned often in our previous notes, there are no signs that signal reversal of primary trend which still remains upwards and intact. However, some signs have emerged that can potentially halt the present momentous up-move for some time. The NIFTY has risen over 220-odd point in previous three sessions and it would be no surprise if we see the Markets getting pushed into some longer time frame consolidation. Also, after Friday’s session, we will open after a extended Week-end with Monday being a trading holiday. Some amount of caution is likely to weigh on the Markets.