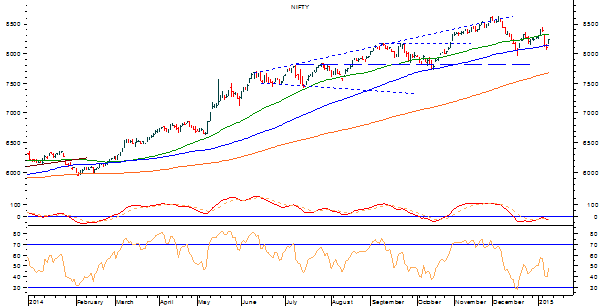 There are bright chances that the Markets would continue with the pullback. We can expect a positive opening tomorrow and the levels of 100-DMA would continue to remain important, but from a different perspective. It is expected to act as support in the immediate short term. The intraday trajectory and volumes too would remain important.

The RSI—Relative Strength Index on the Daily Chart is 48.1590 and it remains neutral as it shows no bullish or bearish divergence or failure swings. The Daily MACD is bearish trading below its signal line.

On the derivative front, the NIFTY January futures have shed 9.17 lakh shares or 4.90% in Open Interest. This means that this pullback has been aided by very sharp short covering at lower levels. It would be important that this replaced by fresh longs in the system.

Taking a cue from pattern analysis, the Markets have taken support at its 100-DMA twice in recent past and therefore this levels have held on as major support. Though the pullback that we have seen has been due to short covering, the pattern analysis shows that the Markets are likely to continue with is pullback and may advance to its further immediate resistance of 50-DMA, i.e. around 8330 levels.

Overall, the Markets are likely to continue with its pullback. However, it is important that apart from short covering which has aided the pullback, we also see fresh longs being taken. Purchases from lower levels can be made and selective stock picking would continue. While remaining vigilant at higher levels, the overall remains intact and therefore sectoral out performance would continue. 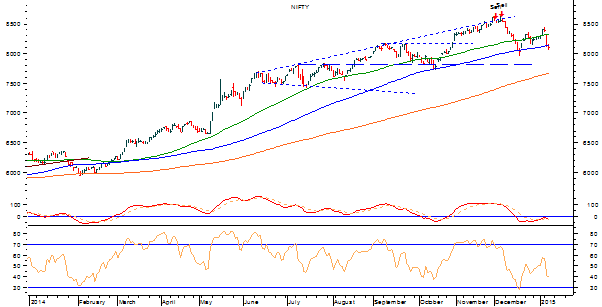 The Markets are expected to attempt a pullback after losing nearly 300-odd points in just two sessions. We can expect a quiet to mildly positive opening in the Markets but the levels of 100-DMA would be very important levels to watch for. The Markets have closed a notch below that though they continue to be very much within the filter. In order to attempt a pullback, the Markets will have to move past this level and trade above that.

The RSI—Relative Strength Index on the Daily Chart is 39.7161 and it has reached its lowest value in last 14-days which is bearish. It does not show any bullish or bearish divergences. The Daily MACD is bearish as it trades below its signal line after reporting a negative crossover.

On the derivative front, NIFTY January futures have shed yet another 4.41 lakh shares or 2.31% in Open Interest. This shows some more unwinding of longs but at the same time, it has moderated to a greater extent. It would be important to see them being replaced with fresh longs.

Going by pattern analysis, as we had mentioned yesterday, the Markets have shown a technical misbehaviour by completely disregarding the 50-DMA while coming down as it has resisted to this very level for couple of days before inching upwards. However, now with the Markets closing a notch below its 100-DMA, it will have to move past this level in order to avoid any weakness. Until the Markets moves past the 100-DMA, we would continue to see some weakness in the immediate short term.

Overall, the analysis continues to remain on the same lines. The Markets will resist to its 100-DMA which is 8132. It would be important for the Markets to move past this level for the pullback to occur and this is also likely to keep the Markets range bound and volatile. Selective stock picking from lower levels can certainly be done. While keeping overall leverage under control, positive caution is advised for the day.

Markets saw their steepest fall since last 65 months as it ended the day with deep cut of 3% as it ended the day at 8127.35. Today, expect the Markets to open on a flat to mildly positive note and attempt some pullback. Technically speaking, there should be some resistance to the downside as the Markets have taken support at its 100-DMA.

The most artificial and shady behavior of the Markets is in the fact that that during the pullback, it resisted for couple of days to its 50-DMA and then went on to move past it. On its way down, it completely disregarded this 50-DMA level which should have otherwise acted as support under normal circumstances.

Given this fact, even if we see some downside, shorts should be strictly avoided. Such nasty behavior of the Markets have provided an opportunity to make selective purchases. However, given the external factors liquidity should be maintained and exposure should be controlled. Overall, some pullback should be expected with the levels of 8127, i.e. 100-DMA should be critically watched for. 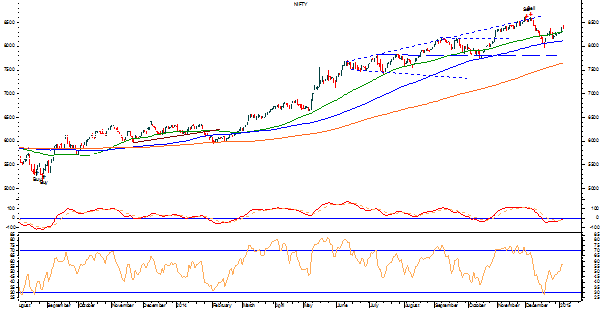 There are chances that the Markets continue to display its consolidation mood and therefore we can expect a quiet opening to the trade. Post opening, the Markets are likely to trade in a capped range with the levels of 50-DMA continuing to act as major and important support.
The intraday trajectory and the volumes would be critical to decide the trend for the given session.

The RSI—Relative Strength Index on the Daily Chart is 56.3259 and it is neutral as it shows no bullish or bearish divergence or any failure swings. The Daily MACD remains bullish as it trades above its signal line.

On the derivative front, the NIFTY January futures have shed over 7.29 lakh shares or 3.40 in Open Interest. This shows some amount of profit taking was done from the higher levels.

Going by pattern analysis, the trend continues to remain intact. However, after the Markets moved past the levels of 50-DMA it is now showing some tendency to consolidate and it is likely that it consolidates for a brief period before it continues with its up move again. However, the most important thing to watch out for is that the Markets will have to remain above 50-DMA to avoid any further weakness from creeping in.

Overall, the Markets consolidated today after Friday’s strong up move. It would be important for the Markets to maintain itself above the 50-DMA levels to avoid any short term weakness. So long as the Markets trade above this level, we can safely presume that the Markets are likely to continue with its up move. Stock specific approach with positive caution is advised for the day. 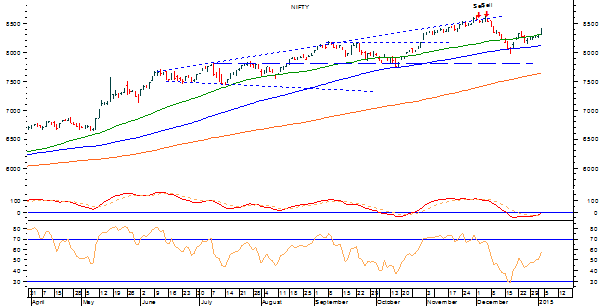 Speaking purely on technical terms, the Markets have posted an breakout above its 50-DMA which it had broken on its way down and had become an resistance and therefore, has successfully continued with the pullback. Expect the Markets to open on a positive note and continue with its up move at least in the initial trade. In event of consolidation, the 50-DMA levels will now again act as support.

The RSI—Relative Strength Index on the Daily Chart is 57.6989 and it remains neutral as it shows no bullish or bearish divergence. The Daily MACD has reported a positive crossover and it now trades above its signal line and is therefore bullish. On Weekly Charts, the RSI is 63.5144 and it remains neutral without showing any bullish or bearish divergence. The Weekly MACD is still bearish as it trades below its signal line but at the same time has flattened out and can attempt a positive crossover in coming Weeks.

On the derivative front, the NIFTY January futures have added over 2.87 lakh shares or 1.36% in Open Interest. This signifies further creation of longs and rules out any possibility of short covering in Friday’s session.

Returning to trend and pattern analysis, the Markets had been resisting to the 50-DMA levels, the levels which it broke on downside. When the Markets attempted pullback, this very level, which was a support earlier, had now become a resistance. The Markets resisted for couple of days to this level and it finally moved past it. Some more gains can be fairly expected in immediate short term.

Overall, the Markets are likely to extend their gains in the immediate short term. Some few days of range bound consolidations cannot be ruled out but overall trend certainly remains intact. One can continue to make moderate quality purchases. Overall, while keeping an eye on existing profits, positive outlook is advised for the day.