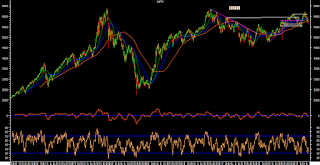 The markets are again expected to open with a modest cut and look for directions. The Markets along with all other global stock, commodity and forex markets have set themselves in for a major realignment / readjustments after the Fed Reserve’s indications. However, though we feel that the Markets are over shooting in its reaction, it would be some time by which they are expected to stabilize. The intraday trajectory would be crucial and intermittent pullbacks cannot be ruled out.

The lead indicators show mild possibility of resilience as they have resisted this weakness. The RSI—Relative Strength Index on the Daily Chart is 33.3906 and it does not show any failure swings. The NIFTY has reached its lowest value in last 14-days but the RSI has not, and this is bullish divergence. The Daily MACD continues to trade bearish, below its signal line.

On the derivative front,  the NIFTY June futures have added massive over 29.99 lakh shares or 16.19% in Open Interest. Similar has been the trend with BankNifty and other key stock futures who too have reported massive addition in Open Interest. This signifies that there has been huge addition of shorts in the system.

Overall, if we read only the technicals, there are fair chances of Markets taking support after opening on a weaker note. Short positions have been continuously added. However, technicals should not be read on stand alone basis. So long as global realignment continues, our Markets will tend to remain volatile however chances of sharp intermittent pullbacks cannot be ruled out at all.

All and all, opening of the Markets and the intraday trajectory it forms would be critical for today. It would be necessary that the Markets attempts to find a bottom after initial weaker opening. The lead indicators have shown some resilience but, as said above, they cannot be read on stand alone basis. However, massive shorts that exist  in the system would continue to pave way of sharp intermittent pullbacks. The Markets will remain volatile. Retail investors are advised to strictly refrain from creating fresh shorts. Fresh longs should be created very selectively and liquidity should be preserved to maintain open positions. Caution is advised for today. 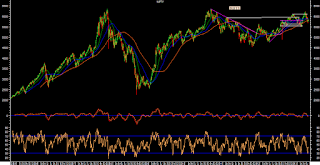 Today, we are all set to see a gap down opening in the Markets today. This would be the reaction to the hawkish FOMC statement, contrary to the expectations wherein the Fed indicated that it would start tapering with the QE by end of this year and mid end with it completely in 2014. This is likely to affect the liquidity that we have been seeing in last couple sessions and it will not be taken in good spirits and the Markets are likely to give a knee-jerk reaction to this.

For today, the levels of 5900 would continue to act as immediate resistance, however the support would come in around 5760 and 5710 levels.

The lead indicators continue to remain neutral. The RSI—Relative Strength Index on the Daily Chart is 43.0135 and it is neutral as it shows no bullish or bearish divergences or any kind of failure swings. The Daily MACD remains bearish as it trades below its signal line.

On the derivative front, the NIFTY June futures have added yet another over 7.34 lakh shares or 4.13% in Open Interest. This indicates that even with some unwinding that has been witnessed in cash markets, the derivative segment have continued to see shorts being built up.

The impact of the indication sent across by the Fed Reserve would have negative sentimental impact for sure in the short term. The markets are see to give it a knee jerk reaction as it would certainly affect liquidity flow to the emerging markets in the immediate short to medium term. This is especially when this meet was discounted by the Markets and it was taken for granted by the most of the market participants that FOMC would show indications to continue with QE and not taper it. The outcome has been the opposite.

With relation to the other Markets, out markets may show resilience but however, it will not escape the immediate knee jerk reaction. In such circumstances, it is strongly advised to stay away and remain light on the positions. The emphasis should be to protect profits wherever possible and protect longs at cost as well. No hurry should be shown in creating fresh positions. However, in our case, resilience at lower levels is certainly expected. Overall, cautious outlook is advised for today. 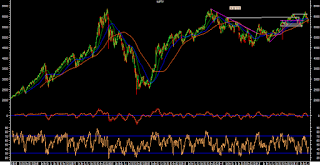 The analysis for today remains more or less on similar lines as the Markets are expected to open on a flat to mildly negative note and look for directions. The Markets have so far held on to its 200-DMA at Close levels. The opening and behaviour of the Markets vis-à-vis the levels of 200-DMA would be critical. The caution would continue to reign ahead of 2-day FOMC meet that begins today, but the event remains more or less discounted.

For today, the levels of 5877 and 5908 which are the 100 and 50-DMA for the Markets respectively shall act as resistance. The levels of 200-DMA are expected to act as major support at Close levels.

The RSI—Relative Strength Index on the Daily Chart is 42.2094 and it is neutral as it shows no bullish or bearish divergence or any kind of failure swings. The Daily MACD continues to trade below its signal line and is therefore bearish.

Given this reading, it is very very important to note that even with selling observed in the cash markets, the derivatives have continuously added the open interest. This is a very significant indicators that says that massive shorts have been created on its way down yesterday. Further, at close levels, the Markets have managed to maintain its support of 200-DMA which is 5805.40 today. So long as Markets continue to hold on to these levels at Close, despite intraday swings, no much weakness may be expected. The shorts too are likely to lend support at lower levels. The caution that we are seeing is because of 2-Day FOMC meet begins today. The markets expect no tapering with the Quantitative Easing measures.

All and all, the Markets shall remain in a broad trading range until it moves past the levels of 5900-5910. The support of the levels of 200-DMA would be important. As mentioned yesterday, the fresh sustainable rally would occur above 5910. However, importantly, wit the amount of shorts that are being witnessed, we very strong recommend to avoid any short positions as short trap can occur any time.  Any weakness, which would be temporary, should be used to make selective purchases or liquidity should be maintained to hold current positions. Overall, cautious optimism is advised. 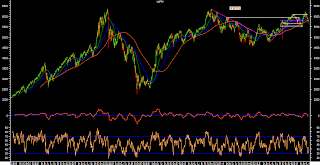 The Markets are again likely to open flat and look for directions. It is in close vicinity of its 100-DMA on the upside and the 200-DMA on the down and the technical and pattern analysis is likely to keep the Markets in a capped range making it range bound. The intraday trajectory would be critical to determine the trend for the day as selective out performance cannot be ruled out.

The RSI—Relative Strength Index on the Daily Chart is 44.6762 and it is neutral as it shows no bullish or bearish divergence or failure swings. The Daily MACD remains bearish in the immediate short term as it trades below its signal line.

On the derivative front, NIFTY June futures have added over 14 lakh shares or 8.95% in Open Interest. This is a very positive indicator and it certainly shows that the recovery that we saw from the yesterday’s lows was not because of mere short covering but was also due to fresh longs that were seen added.

Given this reading of the technical charts, pattern analysis read along with the F&O data, the bias certainly remains on the upside. However, the Markets will have to move past the levels of its 50 and 100DMA and trade above 5905 in order to have a fresh sustainable rally. Until this happens, the Markets will find itself in a trading range and the sessions would be capped and little volatile. But as mentioned just above, the bias certainly remains on the upside.

All and all, given the positive cross over of the 50 and 100-DMA on the Daily Charts, even with any short term weakness or any capped / ranged session, the possibility of the Markets moving past the levels of 5900 remains bright. It is recommended to avoid any kind of fresh shorts. Any temporary downside should be used to make selective purchases as even in range bound trade, selective out performances are likely to be seen. Overall cautious, but positive outlook is advised for today.