MARKET TREND FOR FRIDAY, JANUARY 24, 2015
The Markets are now trading in uncharted territory and technically speaking, they are set to continue with its up move. Given this thing, we can expect a flat to modestly positive start to the session but at the same time, the Markets are also continuing to show some signs of tiredness and this may result into consolidation at higher levels or some mild profit taking while keeping the original trend intact.

The RSI—Relative Strength Index on the Daily Chart is 71.1620 and it has reached its highest value in last 14-days which is bullish. It does not show any bullish or bearish divergence but it now trades in “overbought” zone which is a thing of mild concern. The Daily MACD continues to remain bullish while trading above its signal line.

On the derivative front, the NIFTY January futures have went on add yet another over 4.54 lakh shares or 2.05% in Open Interest. This is a positive indicator showing continuing addition of fresh positions in the Markets on the long side.

Returning to pattern analysis, the Markets are continuing to surge ahead after it broke out on the upside moving past its previous top. However, now that Markets have added some gains moving past this level, it is showing some signs of tiredness at higher levels. The original up trend remains absolutely intact and this is supported by F&O data as well. However, there are fair chances that the Markets may take some breather and this may result into consolidation at higher levels or very mild profit taking.

Overall, taking this picture in view, one can certainly continue to make fresh purchases given the original trend remaining intact. However, as we have mentioned in our previous edition, the same amount of vigilant attention is required to protect profits at higher levels. Continuance of cautious optimism is advised for the day.

MARKET TREND FOR THURSDAY, JANUARY 22, 2015
Today, expect the Markets to see a modestly positive opening once again and might test its fresh highs again. The Markets may trade positive in the opening trade but at the same time some consolidation is likely at higher levels. The Markets are showing very mild signs of weariness and might witness some profit taking from higher levels even while keeping the original trend intact.

The levels of 8750 and 8785 would act as immediate resistance levels as the Markets continue to trade in uncharted territory. The supports would come in much lower at 8640 and 8610 levels.

The RSI—Relative Strength Index on the Daily Chart is 70.1118 and it has reached its highest value in last 14-periods which is bullish. It does not show any bullish or bearish divergence but now trades in “overbought” zone. The Daily MACD continues to remain bullish while trading above its signal line.

On the derivative front, the NIFTY January futures have continued to add modest open interest which shows some fresh amount of buying continued in the Markets.
Returning to pattern analysis, the Markets have successfully moved past its previous high and has attempted a breakout. The Markets are most likely to continue with its up move given the structure of the Charts but at the same time we cannot rule out some minor profit taking at higher levels. This may not result in any major decline but we can certainly see some amount of consolidation at higher levels.

Overall, the trend certainly remains intact. However, in the same breath, the Markets are showing very mild signs of weariness and this might result into some consolidation and mild profit taking at higher levels. Overall, selective purchases may be made but more emphasis should be laid on protecting profits on existing positions at higher levels. Overall, cautious optimism is advised for the day. 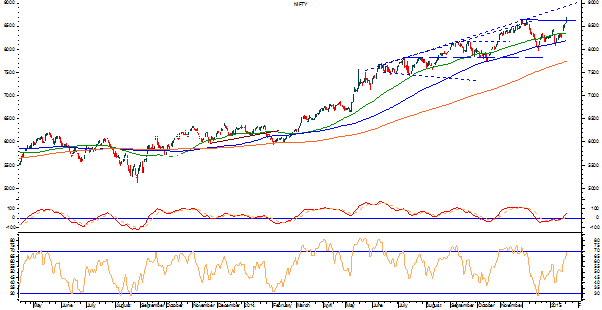 MARKET TREND FOR WEDNESDAY, JANUARY 21, 2015
The session is likely to remain a tricky and cautious affair for the Markets. The Markets, technically speaking, are expected to open and trade positive, at least in the initial trade. However, though it may continue to form fresh lifetime highs once again, some amount of consolidation is likely at higher levels. However, we may not witness any major profit taking, but the up move might be temporarily halted at higher levels.

The Markets now trade in uncharted territory once again. The expected resistance levels can be 8710 and 8145 while supports exist at 8640 and 8565 levels.

The RSI—Relative Strength Index on the Daily Chart is 68.9977 and it has touched its highest value in last 14-days which is bullish. It does not show any bullish or bearish divergence. The Daily MACD remains bullish while trading above its signal line. On the Candles, A rising window occurred  (where the top of the previous shadow is below the bottom of the current shadow).  This usually implies a continuation of a bullish trend.  There have been 8 rising windows in the last 50 candles--this makes the current rising window even more bullish.

On the derivative front, NIFTY January futures have added a massive 16.68 shares or 8.27% in Open Interest. This is a very significant addition in OI which clearly implies heavy buying and creation of fresh long positions.

Returning to pattern analysis, the Markets have moved past its previous lifetime high to form a fresh one. Theoretically speaking, the previous lifetime high is usually expected to pose some minor resistance before the Markets breaks out on the upside. Having this not happened, we cannot rule out some minor consolidation at higher levels. However, in the same breath, with the rally being highly liquidity driven, we can also expect the Markets to continue with its up move and show strength and this would be perfectly normal.

Overall, with the trend remaining extremely buoyant and intact, one can continue to make fresh purchases on selective levels. At the same time, the profits on existing long positions too need to be vigilantly monitored. Overall, while remaining vigilant at higher levels, positive outlook is advised for the day. 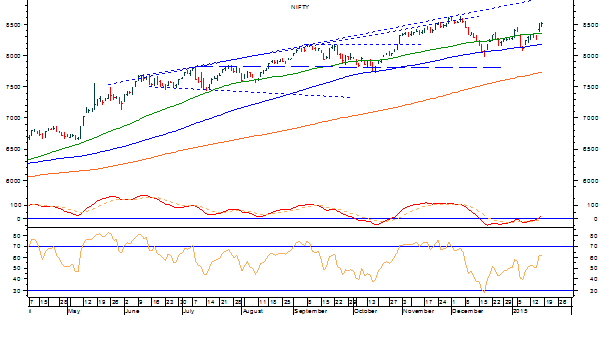 The Markets are likely to witness a flat to modestly positive opening and is expected to continue with its up move but initially witness a range bound trade. The Market is now trading above its all averages and under such structure is usually expected to extend its  gains. However, given the technical structure of the Charts, some ranged movements also cannot be ruled out.

The RSI—Relative Strength Index on the Daily Chart is 62.0565 and it has reached its highest value in last 14-days which is bullish. It does not show any bullish or bearish divergences. The Daily MACD is bullish as it trades above its signal line. On Weekly Charts, RSI is 64.5743 and remains neutral as it shows no bullish or bearish divergence or any failure swing. The Weekly MACD remains bearish trading below its signal line.

On derivative front, the NIFTY January futures have shed over 5.70 lakh shares or 2.77% in Open Interest. This, as we have been mentioning in our previous editions of Daily Market Trend Guide, is little cause of worry as each rise is being attributed more to short covering than fresh buying. It is necessary for the Markets that it sees fresh positions being built up on the long side which would fuel its upside.

Coming to pattern analysis, the Markets currently trades above all of DMAs. In event of any downside, the 50-DMA is again expected to act as support. Given the overall structure and F&O data, there are also chances that the Markets see some ranged movements before it continues with its up move. The overall trend remains intact.

All and all, it is necessary that we continue to exercise caution in the Markets. There are chances that the Markets see some selling pressure from higher levels and consolidate before it moves up again. This ranged movement is also likely to see some volatility ingrained in it. Overall, it is advised to refrain from aggressive purchases. Cautious optimism is advised for the day while adopting highly stock specific approach.