Markets shall once again open while adjusting itself with global activities and there are chances that we may see a quiet opening once again. There are also chances that the Markets continue to consolidate while exposing itself to some pressure from higher levels. Therefore, the analysis would remain more or less on similar lines that of last two trading sessions.

The RSI—Relative Strength Index on the Daily Chart is 71.6069 and it has formed a fresh 14-period high which is bullish. However, it certainly remains in ‘overbought’ territory and also does not show any bullish or bearish divergences. The Daily MACD remains bullish while trading above its signal line.

On the derivative front, the NIFTY November futures have added yet another 12.76 lakh shares or 5.96% in Open Interest. This certainly exhibits bullish bias of the Markets and may prevent any correction from higher levels and reduce it to mere sideways consolidation.

Taking a look at pattern analysis, the Markets continue to test the upper rising trend line of the broadening formation that is seen on both Daily and Monthly Charts. As mentioned in our previous editions, such formations are least useful in achieving breakouts due to its nature and thus an area pattern is required after which the Markets usually takes a further directional call.

Overall, given the overall structure of the Markets, the Markets would still not witness any runaway rise due to the pattern structure and also due to the fact that it remains overbought. However, instead of a correction from higher levels, it can end up just consolidating in a ranged manner. Volatility may persist and there are bright chances that the defensives may outperform during this time. Therefore, while continuing stock specific approach, positive outlook is advised for the day. 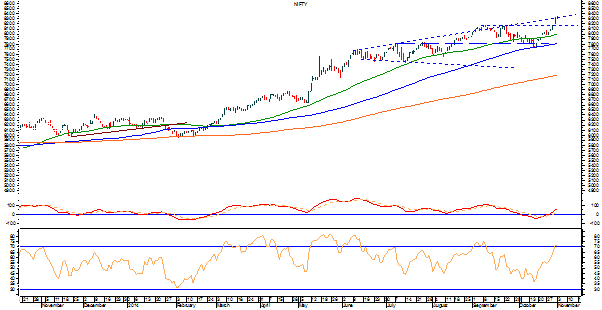 The Markets would open today after a trading holiday yesterday and would adjust to the global movements we had yesterday. Expect the Markets to open on a flat and quiet note and look for directions. Speaking purely on technical grounds, the Markets are more likely to consolidate rather than give a runaway rise further. In event of positive up move, profit taking from higher levels cannot be ruled out. However, overall resilience is expected.

The RSI—Relative Strength Index on the Daily Chart is 71.0579 and it has reached its highest value in last 14-periods which is bullish. However, it does not show any bullish or bearish divergence and it trades in “overbought” zone. The Daily MACD remains bullish trading above its signal line.

On the derivative front, the NIFTY November futures have added over 6.31 lakh shares or 3.04% in Open Interest. This signifies creation of fresh longs and we can see some resilience from the Markets in event of any profit taking from higher levels making it more prone to consolidation rather than correction. The NIFTY PCR stands at 0..94 as against 0.93.

Taking a look at pattern analysis, the Markets have touched its upper rising trend line of broadening formation once again on both Daily and Weekly Charts. Such formations are least useful in determining breakouts due to ever rising upper trend line. However, such trend lines continue to pose resistance at upper levels. With the Markets remaining overbought, it is likely to see some consolidation again at higher levels before it forms a fresh area pattern and attempts to move on the upside again.

Overall, it is likely that Markets may see a mildly positive or quiet opening but it would be prone to profit taking from higher levels. However, in such case, it would show resilience and would see it self consolidating again. It is once again advised to protect profits very vigilantly at higher levels and keep making selective purchases. Overall, cautious optimism is advised for the day.

The Markets are once again likely to face a critical session ahead. The Markets have given a breakout from its previous highs and have ended the day near the highest point. Technically speaking, the Markets should open higher and continue with its up move at least in the initial trade. Also important is the fact that the Markets may face consolidation at higher levels as it might resist to the rising trend line as evident from the Daily and Weekly Charts.

The RSI—Relative Strength Index on the Daily Chart is 70.9861 and it has reached its highest value in last 14-periods and this is bullish. However, it does not show any bullish or bearish divergence and trades in Overbought zone. The Daily MACD remains positive while trading above its signal line. On the Weekly Charts, Weekly RSI is 70.3522 and this trades in Overbought zone. Further, the NIFTY has made a fresh 14-peiod high but Weekly RSI has not and this implies Bearish Divergence on Weekly Charts. The Weekly MACD remains bearish trading below its signal line.

On the derivative front, NIFTY November futures have added 22.09 lakh shares or 11.89% in Open Interest. This is certainly a positive reading and implies fresh robust creation of long positions.

Looking at the pattern analysis, the Markets have once again touched the upper rising trend line of the broadening formation on Daily as well as Weekly Charts. This may cause the Markets to resist and also consolidate at higher levels. Further , it may also expose the Markets to intraday profit taking spikes but overall, might continue to trade with upward bias.

All and all, the Weekly Charts of the Markets depict some short term chances of consolidation at higher levels. In case of positive opening, there are chances that the Markets see some minor profit taking at higher levels and force itself to some consolidation. The Markets have entered into Overbought territory and therefore with every subsequent up move, profits on long positions should be vigilantly guarded. Overall continuance of positive outlook is advised for the day.