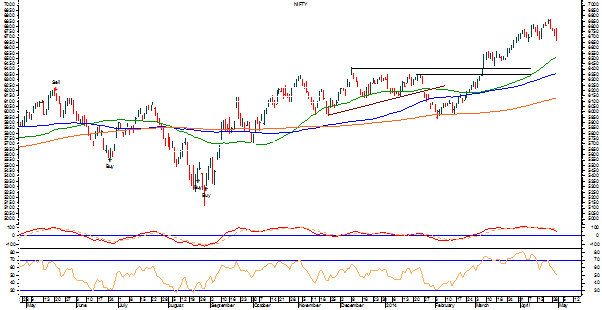 The lead indicators continue to show weariness on the Daily Charts. The RSI—Relative Strength Index on the Daily Chart is 51.7534 and it has reached its lowest value in last 14-days which is Bearish. Further to this, the RSI has set a new 14-period low but NIFTY has not yet and this is clear Bearish Divergence. The Daily MACD too is bearish as it trades below its signal line.

On the derivative front, the NIFTY May futures have added a nominal 53,050 shares or 0.41% in Open Interest. This can be interpreted as though there has been no major offloading seen at the end of the day, there was no short covering as well from the lows of the day on Wednesday.

Going by the pattern analysis, the Markets have formed an immediate top and has corrected since then in the last four trading sessions. Though it may not continue to correct on similar lines, it will overall more likely to correct after showing a gain for a day or so. This reading continues to remain supported by F&O data and the lead indicators as well.

All and all, today we might see a modestly positive opening today and gains might be seen in the initial trade but there are chances that the Markets continue with its corrective activities after a minor technical pullback. With such reading, we continue to advice to vigilantly protect profits on positions and remain moderate on overall exposure. Very selective purchases may be make at lower levels. Overall, continuance of cautious approach is advised for today.

The RSI—Relative Strength Index on the Daily Chart is 53.8205 and it has reached its lowest value in last 14-days, which is Bearish. Further, the RSI has made a new 14-period low but NIFTY has not yet and this is Bearish Divergence. The Daily MACD continues to remain bearish as it trades below its signal line.

On the derivative front, NIFTY May futures have shed over 8.65 lakh shares or 6.29% in Open Interest. This is a clear indication that offloading of long positions have continued in NIFTY Futures . Stock futures too have shown net decline in Open Interest.

All and all, some amount of volatility will remained ingrained in the Markets. The markets may also see some intermittent bounces but it is very likely that it continues to remain in the corrective mode. Keeping in line with this analysis, we continue to reiterate caution and therefore the exposures should be kept moderate in the Markets while remaining very selective and stock specific. Overall, continuance of cautious approach is advised for today. Today, we would witness a session quite similar to that of yesterday. The Markets are likely to open on a quiet to modestly negative note and look for directions. The trajectory that the Markets form would be critical but the overall bias remains towards some consolidation / correction continuing in the Markets with the level of 6869 acting as its immediate top.

On the derivative front, the NIFTY May futures have added over 3.64 lakh shares or 2.71% in Open Interest. The NIFTY PCR stands at 1.12 as against 1.14. The increase in OI indicates that some amount of shorts have started to exist in the system as it has come with the decline in futures.

All and all, we continue with our advice to remain moderate on positions. The reason behind this is that the patterns on the Markets are little overstretched and because of this, any possibility of a correction from these levels cannot be ruled out. This situation is very typical when the overall up moves are dictated with FII money which often tend to neglect technicals for some time. Therefore, while remaining moderate on the positions, cautious outlook should be maintained for today. 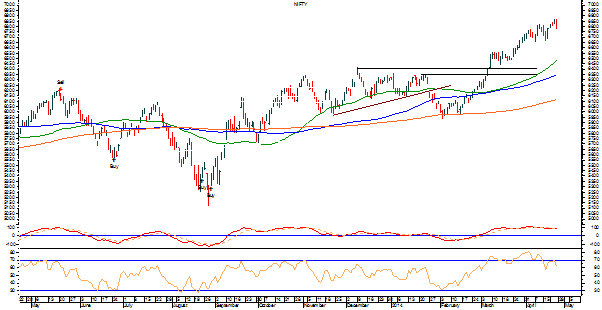 The season of “truncated weeks” continue as this week too is a truncated week with Thursday being a trading holiday again. Today, the Markets are expected to open on a negative note again and there are strong chances that the weakness continues and the Markets continue to remain in the corrective mode. Though the intraday trajectory that the Markets form would be critical but it is not likely to change the overall bias in the Markets today.

For today the levels of 6810 and 6860 would act as immediate resistance levels for the Markets. The supports exist much lower at 6720 and 6675 levels.

The lead indicators continue to show signs of weariness in the Markets. The RSI—Relative Strength Index on the Daily Charts is 61.8476 and it is neutral as it shows no bullish or bearish divergences or any kind of failure swings. The Daily MACD is bearish as it trades below its signal line. On the Candles, a sign of potential weakness is seen. An Engulfing Bearish Line has occurred. This engulfing bearish pattern is absolutely bearish which appears during an uptrend. This is a clear case with NIFTY. This signifies that the momentum in the Markets is weakening. The RSI on the Weekly Charts too stands overbought.

On the derivative front, NIFTY May futures have shed over 6.81 lakh shares or 4.84% in Open Interest. This very clearly signifies that there has been offloading / unwinding of long positions in the Markets.

Going by the pattern analysis, the Markets have again formed a potential top at 6869 levels and there will be no significant up move until the Markets moves past this level. There would be two distinct scenarios that either the Markets would continue to correct from these levels OR would again consolidate in a given trading range as it has been doing. But there will be no run away rise in the immediate short term and in even of such rise occurring there would be a big question mark on its sustainability.

All and all, the Markets are most likely to remain in the corrective mode. The upsides may occur on account of short covering but there will be no sustainable up move until the Markets moves past the levels of 6869. We continue to advice to remain moderate on exposure and any such dips, like that occurred on Friday, should be utilized to make very selective fresh purchases. Overall, continuance of cautious outlook is advised for today.