WEEKLY MARKET OUTLOOK FOR JAN 08 THRU JAN 12, 2018
The week that passed went off better for the Indian Equity Markets as the benchmark NIFTY50 recovered bulk of its losses in the second half of the week. With the positive ending of Friday’s session, the NIFTY ended the Week with a nominal gain of 28.15 points or 0.27%. The NIFTY has managed to move past and stay afloat the 10490-mark but it is yet to clear the resistance zone of 10490-10535 comprehensively. While we begin a new week from Monday, we are all likely to see the NIFTY trying to extend its gains. However, we also do not expect any major runaway rally and expect the NIFTY to find resistance around 10650-mark. 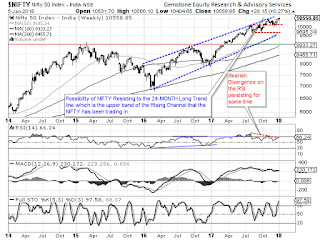 The Relative Strength Index – RSI on the Daily Chart is 66.2384. It continues to show Bearish Divergence as the NIFTY has marked a fresh 14-period high while the RSI has not done so. The Weekly MACD has shown a positive crossover. It is now bullish while trading above its signal line. On the Candles, a Hanging Man emerged. Since it has come after a up move, it may cause some rally to pause for a while in between.

The pattern analysis shows that the NIFTY has managed to stay afloat above its critical support levels. However, it also shows that in event of continuation of up move, it may find serious resistance once again near the 24-month old rising trend line which falls in the area of 10650-10675 area as of end of the previous week. It may so happen that the NIFTY many not see any significant decline in event of any consolidation but also may not see any one-way up move beyond the 10675-mark. The session is also likely to remain highly stock specific and will continue to see certain pockets out rightly out-performing the Markets. We recommend avoiding shorts as the structural up trend remains intact. Select purchases may be made and profits be protected all through-out next week at higher levels. 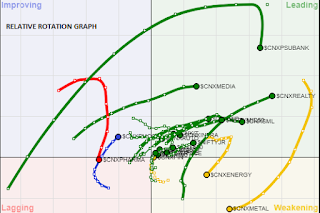 A study of Relative Rotation Graphs – RRG that PSUBANK has significantly lost momentum on a Weekly note. It is likely to continue to consolidate in the coming week as well. MEDIA, REALTY, may relatively out-perform along with select pocket of Small Cap universe. Broader Indices like MIDCAP and NIFTY Next 50 may also perform better. AUTO, INFRA and FMCG will continue to see positive consolidation with select out-performance. PHARMA are likely to continue to relatively under-perform the general markets along with Energy pack. IT also may not see any significant relative out-performance either.

MARKET OUTLOOK FOR FRIDAY, JAN 05, 2018
After a range bound consolidation in the first half of the session, the benchmark NIFTY50 extended its gains on Thursday while it closed with net gains of 61.60 points or 0.59%. With this, the Markets have made yet another attempt to breakout above the 10490-10535 zones. Going into trade on Friday, we expect a quiet to positive opening in the Markets. Though the session will remained dominated with select pockets of out-performance, we expect the up move to continue while the NIFTY attempts to break free of the 10490-10535 resistance zones. 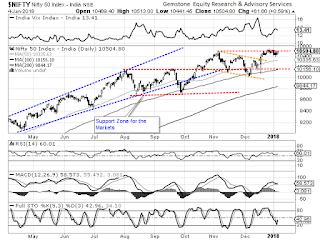 The Relative Strength Index – RSI on the Daily Chart is 60.0085 and it remains neutral showing no divergence against the price. The Daily MACD is bullish while it trades above its signal line. On the Candles, a white body occurred. The present structure on the Candles does not offer any significant formations.

Going by pattern analysis, it is clear that the 10490-10535 zones have been offering stiff resistance for the Markets. A narrow congestion area has developed and the NIFTY is seen oscillating in a capped range over some days now. It has made an attempt to break above this area again. The RSI is seen forming higher bottoms as well while continuing to stay neutral.

Overall, though no break out has yet been achieved, the NIFTY has certainly moved in a way that it attempts to breakout above 10490-10535 zones again. Friday’s opening would be crucial. It would be important for the Markets to move past the 10535-mark. A confirmation to this is awaited. Unless NIFTY moves past these levels, it may remain range bound and be once again pushed into some more consolidation. Select pockets like stocks from PSU Banks, Financial Services and Auto may attempt to relatively out-performing. While continuing to avoid shorts, modest selective purchases may be made. Continuing to maintain cautiously positive outlook is advised for the day.

MARKET OUTLOOK FOR THURSDAY, JAN 04, 2018
The Indian Equity Markets consolidated on a positive note today ending virtually flat while gaining just 1 point or 0.01%. However, as it has been happening, the 10490-10535 zones proved to be a strong resistance area  for the Markets. The Index saw retracement and paring of gains after testing the high level of 10503.60. There is a divergence in performance of NIFTY even with strongly correlated Asian Markets like Hang Seng. Given the kind of consolidation that the Markets are witnessing and while referring the F&O data, we feel that the Markets may consolidation but with a upward bias only to move up again. 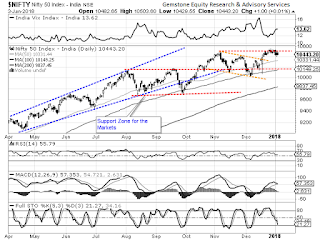 The Relative Strength Index – RSI on the Daily Chart is 55.7909 and it continues to stay neutral against the price showing no divergences. The Daily MACD stays bullish while trading above its signal line. A small black body occurred on the Candles. However, this remains insignificant given the present formation.

The pattern analysis show that the NIFTY has continued to resist to the 10490-10535 zones for couple of times now. It makes one thing pretty evident that that for a up move occur and sustain, Markets will have to move past the resistance area of 10490-10535 zones.

Overall, looking at the high correlation that the NIFTY enjoys with Hang Seng Index among Asian peers, and the fact that Hang Seng Index has already broken out from its life time highs, it makes highly probable that the NIFTY may not correct much. There are high probabilities that the NIFTY may just continue to consolidate for some more time but finally resumes its up move. However, until the resistance area of 10490-10535 is breached on the upside, positively cautious approach is advised for the day.

MARKET OUTLOOK FOR WEDNESDAY, JAN 03, 2018
The benchmark Index NIFTY50 continued to witness fierce consolidation as it ended a volatile day of trade on Tuesday nearly flat with minor gains of 6.65 points or 0.06%. The highlight of the session was the serious resistance that the levels of 10490-posed in the morning trade. The Markets immediately retraced once it tested its resistance area. The area of 10490-10535 will continue to remain critically important area that the Markets will have to breach for a comprehensive breakout. 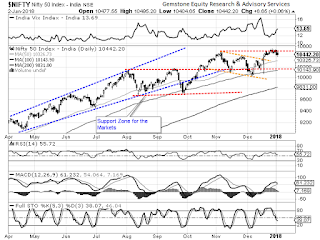 The Relative Strength Index – RSI on the Daily Chart is 55.7205 and it continues to stay neutral against the price. The Daily MACD is bullish as it continues to trade above its signal line. No significant formations are observed on Candles.

The pattern analysis have once again reinforced the credibility of the resistance of the 10490-mark. Going ahead, the zones of 10490-10535 will continue to act as major resistance.

While the mentioned zone of 10490-10535 acts as immediate resistance, the Inter-Market Analysis offers cues as to whether we will see deeper and serious correction or just plain simple range bound consolidation.  Our Markets historically enjoys very high and strong correlation with the Hang Seng (Hong Kong Index). This Index has broken above its previous highs and now trades at historically high levels. In all likelihood, we may resume our up move after much under-performance vis-à-vis the Asian peers over previous days.

However, until this happens, we need to approach the Markets with caution. Until the directional up move is re-established, exposures should be kept limited. Highly stock specific approach but positively cautious view is advised for the day.

MARKET OUTLOOK FOR TUESDAY, JAN 02, 2018
Indian Equity Markets had a turbulent start to the new year as the benchmark NIFTY50 remained range bound throughout the day but saw a sharp decline in the last your of the trade. The Index ended the day losing 95.15 points or 0.90%. Though there is no technical breakdown on the Charts, the Monday’s session remain technically important and it has certainly pushed the NIFTY into some more time under consolidation. On Tuesday, we see a quiet opening to the Markets. We may see some lower volumes as well as the participation in the Markets will remain affected due New Year holidays. 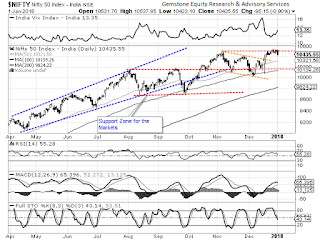 The Relative Strength Index – RSI on the Daily Chart is 55.2808 and it remains neutral showing no divergence against the price. The Daily MACD continues to stay bullish remaining in continuing buy mode. An engulfing bearish candle has emerged. It remains significant as it has occurred at the resistance zone of 10490-10535 and therefore it reinforces the credibility of this resistance area.

The pattern analysis reveals the importance of the 10490-10535 support zones. The Markets have once again failed to confirm the attempted breakout twice from these levels. This zone will continue to act as immediate short term resistance for the Markets.

Failing to clear the 10490-10535 zones for the second time has shown the credibility of this resistance area. Failure to clear the 10490-10535 zones has made some more consolidation imminent in the Markets. There is no structural breach on the Charts but these levels will continue to resist until we see a comprehensive breakout above this resistance area. Going into trade on Tuesday, selection of stocks will hold the key. We recommend avoiding shorts and trimming exposures with any potential up move and protecting profits. Due to New Year holiday season, the volumes will remain affected and this may also infuse some lack of depth and volatility in the Markets. Cautious outlook is advised for the day.

MARKET OUTLOOK FOR MONDAY, JAN 01, 2018
The last session of the Year 2017 ended on a buoyant note as the benchmark Index NIFTY50 once again showed inclination to reattempt the earlier failed breakout. The NIFTY ended with a gain of 52.80 points or 0.50%. While we usher into the New Year on Monday, we see the Markets initiating themselves on a modestly positive note. In all likelihood, the up move that was witnessed on Friday will spill over into Monday’s session as well. We may see Markets extending its gains at least in the initial trade. In any case, the levels of 10490 will remain critically important levels to watch out for. 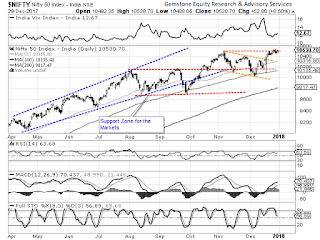 The Relative Strength Index – RSI on the Daily Chart is 66.8111 and though it does not show any failure swing, a Bearish Divergence is observed. The NIFTY marked fresh 14-period high while the RSI did not. The Daily MACD stays bullish while trading above its signal line. No significant formations were observed on Candles.

The pattern analysis shows that the NIFTY attempted a breakout earlier when it moved past the 10490 mark. However, it suffered a throwback and gave up all of its gains from the breakout levels. However, it has attempted to breakout again and a confirmation to this breakout is awaited again.

In any case, if the NIFTY manages to extend its gains and continues with the up move that it witnessed on Friday, we can expect it to test 10600-10630 levels in coming days. However, given the overall structure of the lead indicators on Daily as well as Weekly Charts, we will still need to protect profits very vigilantly at higher levels as sharp profit taking bouts from higher levels cannot be ruled out. Highly stock specific approach with cautious optimism is advised for the day.