WEEKLY MARKET OUTLOOK FOR JUNE 12 THRU JUN 16, 2017
We had mentioned about possibilities of the Markets marking a fresh high in our previous Weekly note. The benchmark NIFTY50 did mark a fresh high this week but in the end remained extremely range bound and ended flat with negligible gains of 14.75 points or 0.15% on a Weekly Note. At this juncture, we would like to repeat what we have said over last couple of days. Markets need to be approached with great caution. Even with underlying trend remaining perfectly intact, the Markets remain prone to short term corrective action given its overbought nature. 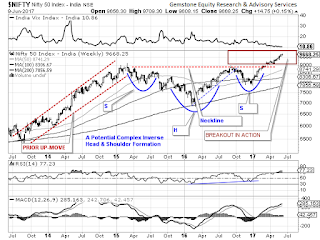 The pattern analysis suggests the breakout that has occurred from 8900-8950 levels perfectly remaining in force.

Overall, though the primary undercurrent certainly remains buoyant, we cannot ignore the fact that both major lead indicators of the Markets remain heavily overbought. The NIFTY remains overbought on Stochastic too. Given these facts, the coming week is certain to see either range bound movement in the manner we saw in the previous week or will show some minor corrective moves. It is advised to approach Markets with great amount of caution. 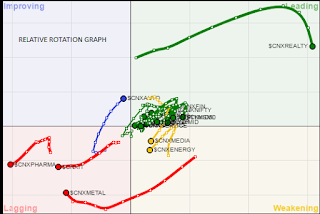 A study of Relative Rotation Graphs – RRG show that pocked of out-performance will be seen in REALTY stocks, on the Weekly note, they will continue to show down in momentum. We will see IT and Metals consolidate its performance and individually inch upwards. AUTO stocks are likely to out-perform and we will also see relative out-performance from FMCG and BANKNIFTY Stocks. Laggards will include ENERGY  and MEDIA. 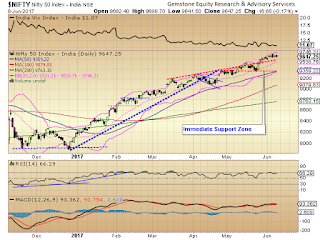 Though no major downsides were seen, the Markets continued to put a lackluster show on Thursday as  the benchmark NIFTY50 ended the day with a modest loss of 16.65 points or 0.17% after coming off 40-odd points from the high of the day. On Friday, though we see a quiet opening, we will continue to see the Markets putting up a weak show and no runaway pullback is expected. Tiredness is evident and at this juncture, unless there are stock specific opportunities, we do not recommend any major long exposures until the Markets move past the 9710-mark.

The Relative Strength Index –RSI on the Daily Chart is 66.2899 and shows no divergences on either side and is neutral. The Daily MACD is bullish but it is moving towards reporting a negative crossover. No major formations were observed on Candles.

Going by pattern analysis, Markets have managed to move past the upward rising trend line drawn from 9200 mark and as of today has managed to keep its head above it. Given the upward rising nature of this trend, it offers immediate pattern support in the zones of 9580-9600.

All and all, even with the overbought nature of the Markets over previous days, the NIFTY has not shown much decline. This certainly displays underlying strength in the Markets. However, we still recommend exercising high amount of caution and keep overall exposure at moderate levels. Fresh sustainable up moves shall occur only above 9710 levels. Until this happens, and so long as Markets consolidate, adopting stock specific and cautious approach is advised. 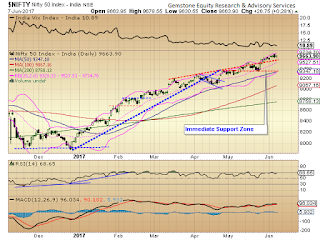 The Markets on Wednesday continued to post modest upsides as the benchmark NIFTY50 ended the day with net gains of 26.75 points or 0.28%. The Markets reacted to the RBI’s Credit Policy Review while the central bank kept the key rates unchanged and cut the SLR by 50 basis points. On expected lines, this remained a non-event. Coming to the technicals, the Markets continue to hang in precarious balance. It has been trying to avoid the minor corrective movement which is imminent and overdue. We reiterate high amount of caution and recommend market participants to continue to focus more on protecting profits at higher levels than fresh buying.

The Relative Strength Index – RSI on the Daily Chart is 68.6476 and it is neutral showing no divergences on either side against the price. The Daily MACD is bullish as it trades above its signal line. However, it is moving towards a negative crossover given its trajectory. On
Candles, a long lower shadow occurred. This occurred after a bearish engulfing line which occurred on the previous day. There are all chances that the current up move may be halted temporarily.

All and all, we reiterate approaching Markets with extremely caution. Though major downsides may not be there but some amount of corrective action is very much likely. If the Markets continue to post up move, more emphasis should be laid on protection of profits at higher levels and fresh purchases should be kept moderate. Continuance of cautious outlook is advised for the day.

MARKET OUTLOOK FOR WEDNESDAY, JUNE 07, 2017
In our Tuesday’s note, we had categorically cautioned investors that the overstretched Markets may face some minor but imminent corrective action. Though markets did not see a deep cut but it did come off nearly 80-odd points from the opening highs while ending the day with net loss of 37.95 points or 0.39%. On Wednesday as well, we expect such corrective behavior of the Markets to continue. Though the downsides may not be brutal, but the kind of corrective activity that we saw on Tuesday is likely to repeat itself. Barring some stock specific action, we expect the Markets to continue to show minor correction on Wednesday as well. The levels of 9709 has now become an immediate top for the Markets.

The Relative Strength Index—RSI on the Daily Chart is 66.8909 and it has just crossed below from a topping formation which is bearish. The Daily MACD still remains bearish while it trades below its signal line. On the Candles, an Engulfing Bearish Line has occurred. Since it has occurred after a uptrend, it potentially marks a short term top for the Markets.

The pattern analysis show Markets still ruling above the upper trend line that it breached on the upside. This trend line is rising and is drawn from 9200 levels is likely to lend support to the Markets in immediate short term.

Overall, some pockets will continue to show out-performance and stock specific action is likely to dominate the session. In the same breadth, we see broader Markets continue to consolidate and show minor corrective activities. Cautious outlook is advised for the day. 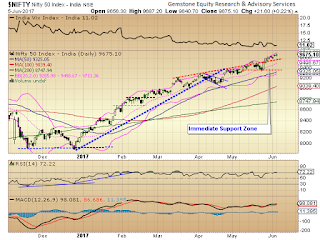 While refusing to correct, the benchmark NIFTY50 continued to scale fresh highs amid tentative movement which remained limited in a defined range. The Markets on Monday ended with yet another modest gain of 21.60 points or 0.22%. On Tuesday, we expect a flat to modestly negative opening in the Markets. Given the overstretched structure on the Daily Chart, we reiterate that market participants need to approach the Markets with extreme caution now. We further reiterate that henceforth, until some meaningful consolidation occurs, traders should utilized the up moves only to book profits and any major fresh exposure should be avoided.

The Relative Strength Index – RSI on the Daily Chart is 72.2217. It not only trades overbought but also shows Bearish Divergence as NIFTY did not mark fresh high even as RSI marked its fresh 14-period high. MACD stays bullish trading above its signal line. No significant formations were observed on Candles.

While having a look at pattern analysis, the Markets are seen inching upwards after it managed to move past the rising trend line drawn from 9200 levels. However, the movements so far on the upsides have remained limited and tentative.

Further, it remains very important to note that the recent gains have come while Markets traded in a very narrow range and on much lower-than-average volumes. Lead indicators remain highly overstretched and the NIFTY remains overbought as well. We recommend refraining from taking a fresh major long positions and lay maximum emphasis on protecting profits at higher levels.

MARKET OUTLOOK FOR MONDAY, JUNE 05, 2017
While we had referred the levels of 9650 as an immediate resistance level and a temporary top for the Markets, the benchmark NIFTY50 attempted to move past that level on Friday. While the session remained range bound, the Markets ended the day with modest gain of 37.40 points or 0.39%. On Monday we expect a quiet to modestly positive start. We see that the Markets may attempt to mark fresh highs but this is the time we approach the Markets with extreme sense of caution and exploit all up moves to protect profits at higher levels.

The Relative Strength Index – RSI on the Daily Chart is 71.0002. It is not only overbought once again but it also shows a Bearish Divergence as the NIFTY again marked a fresh 14-period high while RSI did not. The Daily MACD remains bullish while trading above its signal line. On the Candles, a rising window occurred. This is a gap, and this usually has bullish implications on the following day. But still, higher levels need to be vigilantly guarded.

Overall, there are all chances that we see some initial buoyancy. However, we reiterate that we need to approach the Market with great caution. We do not say that we will have significant downside correction but the currently structure of the Markets and the lead indicators certainly point towards some minor but overdue corrective action. All up moves should be utilized to protect profits at higher levels while keeping fresh purchases highly selective and limited.