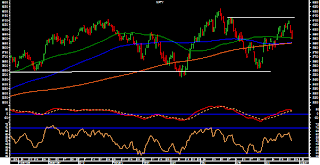 As evident from the Charts, the Markets have still not breached any significant resistance levels. Today, expect the Markets to open on a moderately positive note and look for directions. The intraday trajectory that the Markets form after opening would be crucially important because it would hold out the levels of 50-DMA as a immediate support for the Markets.

The RSI—Relative Strength Index on the Daily Chart is 49.1167 and it has reached the lowest value in last 14-days which is bearish. Also, RSI has made a new 14-day low but NIFTY has not and this is bearish divergence as well. However, given this, the Daily MACD is still continuing to remain bullish as it trades above it signal line.

On the derivative front, the NIFTY has reported rollovers in line with the previous months and the August series have reported a massive open interest addition of over 32.95 lakh shares or 22.40% in open interest. This very clearly signifies that there has been huge addition of shorts in last two days of trade.

Having said this, even with there is some weak signals on RSI, the Daily MACD continues to remain bullish, at least as of today. Further to this, the derivative data too shows huge addition of open interest numbers. Given all this, there are chances that we might see some relief rally today. However, it would be important for the Markets to remain above the levels of 50-DMA and for this the intraday trajectory would remain crucially important.

All and all, we are likely to see a relief rally and we might see the Markets attempting a pullback and continuing with it trend reversal. There are mix signals on the lead indicators but the bias remains tilted on the positive supported by derivative figures. It would be important for the Markets to remain above its DMAs. With no structural breach on the Charts even as yet, shorts should still be avoided and once can continue making selective purchases. Overall caution, with mild dose of positive optimism is advised for today. 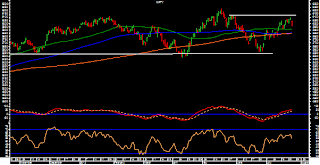 Today as well, expect the Market to open on a modestly negative note and look for directions. Today is the expiry day of the current derivative series and are all set the see the session remain highly dominated with rollover activities. Especially today, the intraday trajectory that the Markets form would be critically important to decide the trend for today.

All lead indicators continue to remain in shape. The RSI—Relative Strength Index on the Daily Chart is 55.0801 and it is neutral as it shows no bullish or bearish divergences or failure swings. The Daily MACD continues to remain bullish as it trades above its signal line.
On the derivative front, though we are on the expiry day today, the rollovers until yesterday have been reported in line with expectations and were decent. Both NIFTY and Stock futures have continued to add in total open interest. In yesterday’s session, significant amount of shorts were seen added in the system.

At this juncture, it is important to note that the Markets reacted last time couple of days back to RBI’s announcement of calibration of MSF at 10.25% and that proved to  be a knee jerk reaction as it returned to those levels after a sharp recovery. This time as well, similar amount of shorts are being added and a pullback cannot be ruled out either today or tomorrow.

All and all, there has been no structural breach on the Charts as of today. Today’s expiry session may keep the session volatile but with the huge shorts being reported again, there are very fair chances that we see the Markets improving as we go ahead in the session. If not today, pullback incoming days just cannot be ruled out. We continue to reiterate to spot selective buying opportunities with any downtick. Shorts should be avoided. Cautious optimism is advised for today. 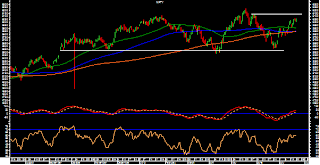 The Markets have been consolidating during last two sessions. This consolidation has been a positive one and yesterday, even the Weekly Charts suggested that we might see some up move in the immediate short term. Today, expect the Markets to open on a positive note and look for directions. The opening would be expected above its consolidation levels and it would be important for the Markets to sustain opening gains in order to have further up move.

The lead indicators continue to remain perfectly in place. The RSI—Relative Strength Index on the Daily Charts is 59.8473 and it is neutral as it shows no bullish or bearish divergence or failure swings. The Daily MACD continues to remain bullish as it trades above its signal line.
On the derivative front, the NIFTY Futures have continued to add in total open interest. So has the stock futures which too have reported addition in net open interest.

Overall, the lead indicators and the patterns on the Charts continue to remain in place. The levels of 6060 have been in intermediate resistance (consolidation upper limit) and today’s opening would be around or above this levels. It would be important for the Markets to capitalize on the positive opening and this would take the Markets in the 6100-6130 zone which will have a pattern resistance in form of a Double Top. 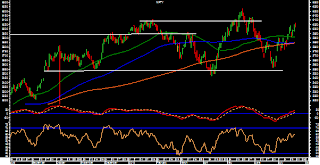 For today, expect the Markets to open on a flat note and look for directions. The lead indicators of the Markets remain neutral to mildly bullish. For today intraday trajectory that the Markets forms after opening would be crucial to decide the trend for the day. With analysis of the technical indicators on Daily and Weekly Charts, the trend would likely to remain overall bullish in the immediate short term.

The lead indicators on the Daily and Weekly Charts are neutral to bullish. The RSI—Relative Strength Index on the Daily Chart is 59.6983 and it shows no bullish or bearish divergence or any failure swings and is therefore neutral. The Daily MACD continues to remain bullish as it trades above its signal line.

On the Weekly Charts, the RSI remains neutral. The Weekly MACD reported a positive crossover and it now trades above its signal line and is therefore Bullish.

On the derivative front, the NIFTY  July futures have added in net Open Interest which is a positive sign. The NIFTY PCR stands at 1.31 as against 1.33.

Overall, this being a the expiry week now the Markets will see rollovers begin and for the most part of the week is likely to remain dominated with rollover centric activities. However, given the combined reading of the Daily and the Weekly Charts, the even if this rollovers keep the Markets in a range bound trade or little  volatile, the overall trend is likely to remain intact with a upward bias.

All and all, with the flat opening expected, the intraday trajectory remains crucial. Even with the Markets getting little weaker, it is not likely to breach any important supports. Volatility may remain and we will continue to see selective out performance. Further to this, with the lead indicators on both the Daily and the Weekly Charts remaining intact, even if the Markets consolidate a bit, it would be with an upward bias. While continuing to avoid shorts, fresh purchases may be made and at the same time, profits too should be vigilantly protected. Overall, cautious optimism is advised for today.