Daily Market Trend Guide has not been published today due to a technical glitch. Inconvenience caused is sincerely regretted.


Expect the Markets to open on a flat note and again and look for directions. It is likely to spend the session in a range bound manner and might start reacting to the IIP numbers slated to come in the evening and therefore give a clear directional call beginning next week. Sectoral reactions can be seen to INFY Numbers coming out as well. Overall, the 50-DMA would continue to pose immediate resistance to the Markets. It would be necessary for the Markets to move past that level to resume its up move. Markets have seen high creation of shorts as the premiums across Indices and Stocks have significantly reduced. While avoiding shorts positive caution is advised.


The Markets ended its four day losing streak and ended the day with minor gains yesterday in a session which was range bound with low volumes. The Markets opened on a positive note and spent the first half of the session with modest gains. The Markets traded sideways until afternoon but gave up its gains to trade flat in the late afternoon trade. However, it managed to recover from its lower levels again and went on to give the day’s high of 6192.10. It resisted to its 50-DMA and amid low volumes pared those gains again. However, it managed to end the day at 6174.60, posting a net gain of 12.35 points or 0.20% while forming a lower top but higher bottom on the Daily High Low Charts. 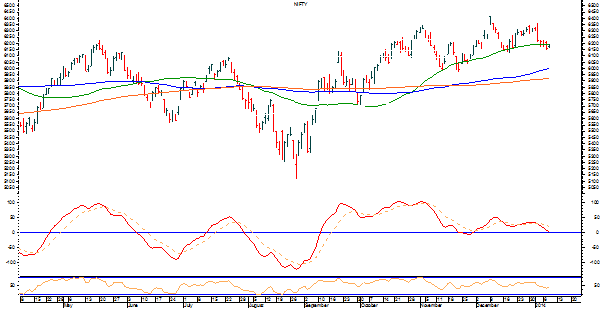 Today’s analysis again remains more or less on similar lines as that of yesterday. The Markets have attempted to find its bottom but has continued to resist at its 50-DMA levels. Today, we can expect a flat opening and it would be critical to see if the Markets manage to move past their 50-DMA level which is 6195.82 today.

The RSI—Relative Strength Index on the Daily Chart is 45.4912 and it remains neutral today with no bullish or bearish divergences or any kind of failure swing. The Daily MACD continues to trade below its signal line.

On the derivative front, NIFTY January futures have shed over 4.48 lakh shares or 2.53% in Open Interest. This signifies that there has been some short covering at the lower levels. As we just mentioned above, the Markets have attempted to find its bottom and it would be crucial to see if we see fresh long positions being taken.

All and all, the opening levels and the intraday trajectory that the Markets form would be crucial and the behaviour vis-à-vis the levels of 50-DMA at Close would be important. It would be necessary for the Markets to move past this level in order to avoid any weakness persisting and to resume its up move. Until this happens, it is advised to continue to remain very stock specific and maintain liquidity by avoiding over-exposure in the Markets to protect open positions. Overall,  like yesterday, continuance of positive caution is advised. 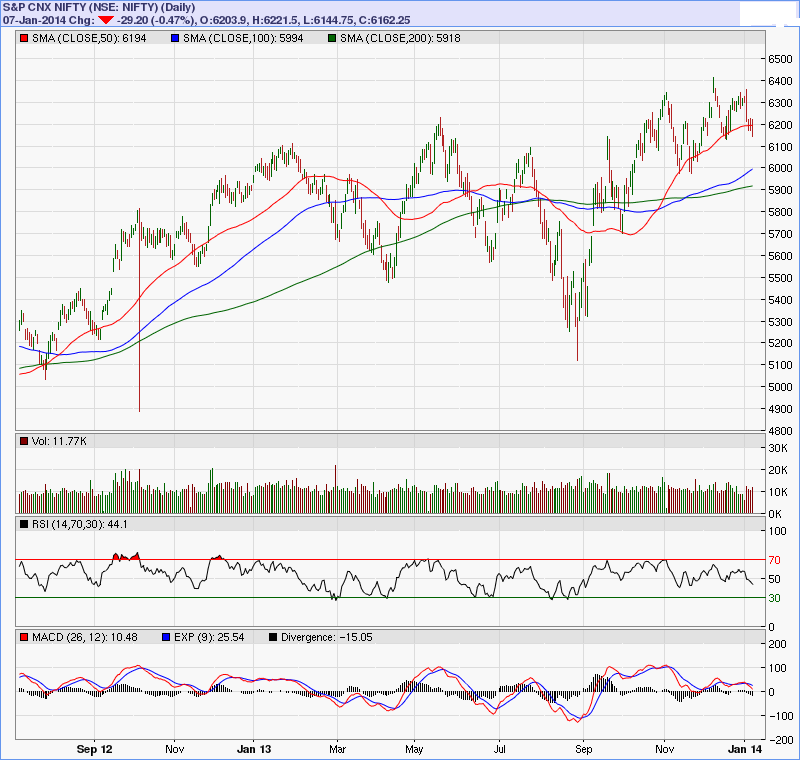 Today, we can expect some respite from the weakness that we have been seeing since last couple of days. The Markets are expected to open on a modestly positive note and look for directions. The behaviour of the Markets vis-à-vis the levels of 50-DMA would remain crucial and intraday trajectory, therefore, would continue to remain critically important. The global markets trade stable this morning.

The RSI—Relative Strength Index on the Daily Charts is 44.0995 and it has reached its lowest value in last 14-periods which is bearish. However, it does not show any bullish or bearish divergence on the Charts. The Daily MACD continues to trade below its signal line.

On the derivative front, the NIFTY January futures has remained practically unchanged as it has shed just 48,750 shares or nominal 0.27% in Open Interest. We can fairly conclude that there has been no major shedding of long positions in the Markets with the yesterday’s decline.

The Markets have ended the day below their 50-DMA but is still well within its filter levels. The Markets would see a modestly positive opening today but it would be very critically important for it to see that it maintains those opening gains. The levels of 50-DMA, 6194, would continue to pose mild resistance on the upside.

Overall, with the Markets expected to open positive and with global markets in supportive mode, we may again see the Markets testing the levels of 50-DMA. It would be important for the Markets to move past the levels of 6195 and trade above that. It is advised to remain ultra selective while taking new positions and maintain adequate liquidity to protect open positions. Overall, continuance of positive caution is advised for today. 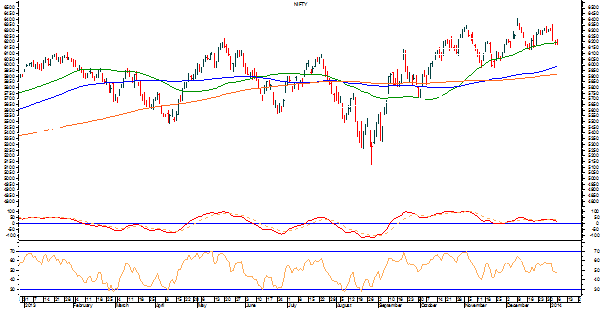 Once again, the analysis for today remains similar as that of last two days. The Markets have managed to hold on to the support of 50-DMA at Close levels since last two sessions. Today, expect the Markets to open on a flat note and look for directions. Trading of the Markets above the levels of 50-DMA and maintaining it at Close levels would continue to be of critical importance for the Markets. The intraday trajectory would remain crucial.

The RSI—Relative Strength Index on the Daily Chart is 46.7182 and it has reached its lowest value in last 14-days which is bearish. Also, the RSI has formed a new 14-period low while NIFTY has not yet and this is bearish divergence. The Daily MACD remains bearish as it continues to trade below its signal line. However, on Candles, an engulfing bearish pattern has occurred. If the engulfing bearish pattern occurs during a downtrend (which appears to be the case with NIFTY), it may be a last engulfing bottom which indicates a bullish reversal.  The test to see if this is the case is if the next candle closes above the bottom the current (black) candle's real body.

On the derivative front, NIFTY January futures have added a nominal 1.55 lakh shares or 0.88% in Open Interest. We can say that the OI has remained practically unchanged with a positive bias as it has shown a mild increase.

Given the above reading, the lead indicators show that we may see some mild weakness persisting in the Markets for immediate short term. However, given the F&O data and the formation on the Candles charts, we also see that this may be of very short term and the Markets would continue to trade with a positive bias so long as it maintains support of 50-DMA and its filters at Close levels.

Overall, we may see the Markets range bound once again and intraday trajectory that the Markets forms would be of critical importance. The levels of 50-DMA would be important to watch for at Close and volumes too would play a critical role. However, until now, the Markets will trade with a positive bias as it has maintained its critical supports and no major shedding of OI is seen. While avoiding shorts, modest purchases may be made while maintaining a positive caution on the Markets. 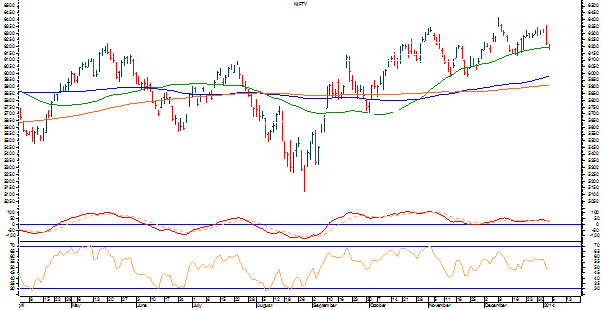 With the 50-DMA being 6193 today, today’s analysis again remains more or less on similar lines like Friday. We are expected to see a flat to mildly subdued opening today and the Markets will once again trade near its 50-DMA. Like Friday, it would be of critical importance for the Markets to maintain levels above of 50-DMA and maintain closing levels above that to avoid any weakness.

The RSI—Relative Strength Index on the Daily Chart is 48.5232 and it is neutral as it shows no bullish or bearish divergence or any failure swings. The Daily MACD remains bearish as it trades below its signal line. On the Weekly Charts, RSI  is 56.2077 and it is neutral with no divergences of failure swings. The Weekly MACD continues to remain bullish as it trades above its signal line.

On the Derivative front, the NIFTY January futures have shed 17.52 lakh shares or 8.82% in Open Interest. This shows that the recovery that we saw on Friday from lower levels was more on account of short covering rather than any fresh buying. It would be important to see if this no translates into fresh buying or not.

Give the pattern analysis and the F&O Data, the Markets will not show any significant weakness creeping in so long as it manages to trade above the levels of 50-DMA. The Markets have successfully kept its head above 50-DMA at Close levels on Friday and it is important it continues to do so.

All and all, the Markets may open mildly weak, but there will be no structural breach on the Charts so long as it is trading above its 50-DMA and its filters. Any weakness will keep the Markets in a capped range. Some amount of volatility may also be seen. It is still advised to continue to refrain from shorts as some sectoral out performance would continue. While remaining light on positions, cautiously positive outlook is advised for today.