Today, expect the Markets to open on a moderately negative note and look for directions. The Markets are expected to continue to see minor correction and thus the intraday trajectory would be important. The  volumes too would be critical. Yesterday’s volumes have remained much below average.

The RSI—Relative Strength Index on the Daily Charts is 54.73 and it shows no negative divergence or failure swings. The Daily MACD continues to trade below its signal line.

The NIFTY and Stock Futures have added 2.8 lakh shares and 1 Crore shares respectively in Total Open Interest. In yesterday’s session, the important thing to note is that with the minor correction that we saw, there has been significant drop in the volumes. This is a positive factor. Today also, if the Markets continue to see minor correction, the volumes are expected to be on the lower side. The intraday trajectory too would be important. The NIFTY PCR stood unchanged at 1.11 yesterday.

All and all, it would be perfectly healthy for the Markets if it sees some correction, though a minor one, one much lower volumes. This will make it sustainable for the further up move as the overall set up looks positive. With every such minor corrections, selective purchases should be made. Profits too should be protected on either side. Overall, positive outlook is advised as undercurrent remains intact.

The Markets had a range-bound session yesterday wherein it positive consolidated on expected lines as it ended the day with moderate gains forming a higher top and higher bottom on the Daily High Low charts.

For today, again, the analysis would remain on more or less the same lines as the Markets are expected to open moderately positive and continue to move in capped range and consolidate. Only difference would be that they are approaching some minor resistance levels which it needs to guard against.

All lead indicators continue to remain in place. The RSI--Relative Strength Index on the Daily Chart is 56.11 and it is neutral as it shows no negative divergence or failure swings. the Daily MACD continues to trade below its signal line. The NIFTY and Stock Futures have continued to add in Total Open Interest.

The FED Meet yesterday remained an non-event as it continued its 0.00%-0.25% interest rate regime. Also it did not announce any new measures. However reducing of SLR by RBI has effective increased the liquidity supply and is likely to remain a positive factor. The another external event to watch for would be the ECB meet today.

All and all, the positive consolidation is likely to continue. The Markets are likely to remain little volatile and remain in a range. There are also chances that it slightly reacts at the resistance levels today. But with the indicators perfectly in place it would not be more than some consolidation as the undercurrent and the trend remains intact. It is advised to continue to make selective purchases. Overall, continuation of cautious optimism is advised for today.
Milan Vaishnav,
Consulting Technical Analyst,
www.MyMoneyPlant.co.in
http://milan-vaishnav.blogspot.com
+91-98250-16331
milanvaishnav@mymoneyplant.co.in
milanvaishnav@yahoo.com
Posted by MyMoneyPlant.co.in at 8/02/2012 08:55:00 AM No comments:

Today’s analysis continues to remain more or less similar to that of yesterday. We can see positive consolidation in the Markets and this can keep the Markets little volatile, range bound but with upward bias. The two external events that the Markets would be watching out for is the Fed Meet today and the ECB meet tomorrow wherein, the zero rate regime and the liquidity infusion are expected to continue.

The RSI—Relative Strength Index on the Daily Chart is 55.16 and it is neutral as it shows no negative divergence or failure swings. The Daily MACD continues to trade below its signal line.

The FIIs have remained net buyer in Cash Segment and Derivatives segments. NIFTY and Stock futures have continued to add in total open interest.

Having said this, overall, positive consolidation is expected to continue. Any little bouts of weakness, or profit taking, as seen yesterday should be used in making selective purchases. Shorts should be avoided. Overall, positive optimism is advised as all indicators remain intact and bias remains positive.

The Markets had a robust session as it opened with a gap up opening, remained in positive rising trajectory and also ended the day with robust gains at 5199.80, posting gains of 99.95 points or 1.96%.

For today, expect a moderately positive opening again and expect the Markets to positively consolidate ahead of RBI Policy Announcements. The Markets shall open positive and then it is expected to move in a capped range and then react to the RBI Announcements.

For today, the levels of 5230 and 5265 are expected to act as immediate resistance.

The RSI--Relative Strength Index on the Daily Chart is 52.77 and it shows no negative divergence or failure swings. The Daily MACD still continues to trade below its signal line.

The NIFTY and Stock futures have continued to add the  Open Interest, signifying continuation of long positions and no significant squaring off activities were seen.

Today, over 90% of the surveyed participants expect no cuts in Repo Rates. However, 25 bps of CRR cut is expected. There is less negative danger on the sentiment as the Markets shall go in with no expectations about rate cuts, but even a minor cut would be a positive surprise.

All and all, some consolidation would be seen around these levels and some knee-jerk reactions too may be seen. Overall, it is advised to continue with the current positions and selectively make purchases in case of any profit taking bouts. Shorts still should be avoided. Overall, positive optimism is advised for today.
Milan Vaishnav,
Consulting Technical Analyst,
www.MyMoneyPlant.co.in
http://milan-vaishnav.blogspot.com
+91-98250-16331
milanvaishnav@mymoneyplant.co.in
milanvaishnav@yahoo.com
Posted by MyMoneyPlant.co.in at 7/31/2012 08:55:00 AM No comments: 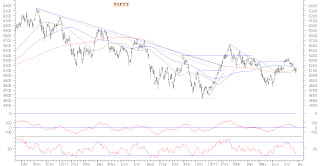 Markets are again expected to open above the 200-DMA levels, the levels near which it has closed on Friday after dipping below it on Thursday. The Markets are likely to remain volatile due to two external events coming up – RBI Policy tomorrow and the FED (less important) meet the day after. RBI Policy announcement, especially, has kept the Markets selectively performing but the bullish undertone cannot be ruled out given that the global Markets have rallied almost 6% in last three sessions.

Today, the levels of 5150-5153 shall continue to act as resistance as its previous high and also the 100-DMA. The Markets shall open higher but intraday trajectory and maintaining opening gains would be again important. The levels of 5103, its 200-DMA is expected to act as immediate support, followed by 5065.

The NIFTY and Stock Futures have continued to add Open Interest implying no significant short covering on Friday.

Amid this chaos, it is important to note that the Markets have underperformed due to, firstly, the expiry activity on Thursday, and also continuing caution ahead of RBI Policy announcement coming up tomorrow. Though 50% of the surveyed people do not expect any rate cut.

We wish to further point out that keeping our head in place is extremely important, especially when such chaotic conditions are prevailing. We reiterate that this is NOT a Market wherein we can aggressive short until it closes below its 200-DMA and ALSO its filters. Until that happens, the wisest thing that a retain investor can do is to hang on, and let such chaos pass through. The patience is being tested. It is important to note that this is the major reason for relative underperformance vis-à-vis the global markets.

All and all, such volatile conditions may prevail until a day or two more, but it is strongly advised to refrain from shorts until the Markets breaches the levels mentioned. The way, shorts should be refrained, aggressive additions to existing positions too should be avoided. It is best advised to maintain patience and liquidity and sit through such chaotic conditions. Overall, cautious optimism is advised for today.