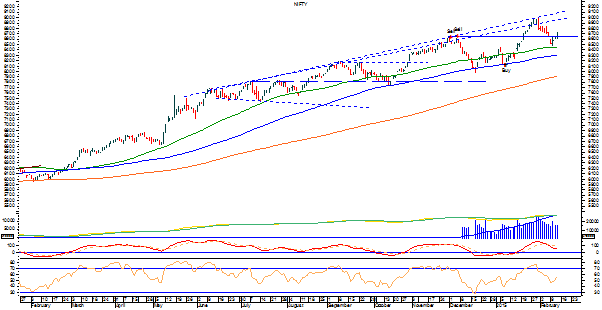 MARKET TREND FOR FRIDAY, FEBRUARY 13, 2015
Speaking purely on technical grounds, the Markets are expected to open on a positive note and continue with its up move at least in the initial trade. Having said this, the levels of 8640 that it moved past yesterday will now once again continue to act as support in event of any consolidation or minor downticks.  The overall trend of the Markets remains intact for the immediate short term.

The RSI—Relative Strength Index on the Daily Chart is 56.5075 and it remains neutral showing no bullish or bearish divergence or failure swing. The Daily MACD continues to remain bearish trading below its signal line.

On the derivative front, the NIFTY February futures have added over 4.97 lakh shares or 2.01% in Open Interest. This clearly signifies addition of fresh long positions in yesterday’s up move. It also signifies that the no short covering caused the yesterday’s rise. This makes the Markets little bullish in the immediate short term.

Taking a cue from pattern analysis, the Markets have continued to remain in an overall long term rising channel. Though it did resist to its short term important resistance levels of 8640 yesterday for quite some time, it has moved past that level. This level is now expected to act as immediate support for the Markets. Given all things remaining constant, the Markets are expected to test the upper rising trend line once again before it approaches for any fresh lows.

Overall, the Markets have successfully kept its overall prime trend intact. Baring some consolidation and minor corrections aside, the basic trend remains positive. However, some volatility will continue to stay ingrained. Having said this, it is advised to make fresh selective purchases now but also profits at higher levels should be vigilantly protected. Overall positive outlook is advised for today. 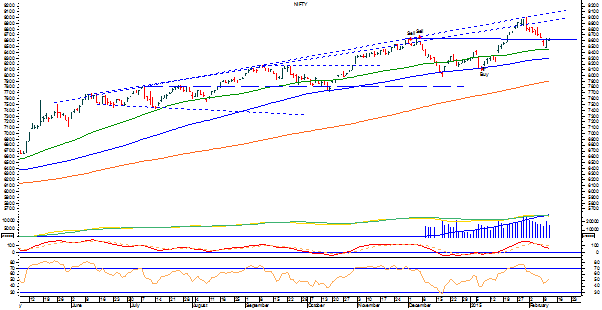 The RSI—Relative Strength Index on the Daily Chart is 51.7604 and it remains neutral without showing any bullish or bearish divergence or any failure swing. The Daily MACD remains bearish trading below its signal line.
On the derivative front, the NIFTY February futures have shed over 1.33 lakh shares or nominal 0.54% in Open Interest. This signifies no major change in overall positions in the Markets. A minor change in OI also indicates consolidating and directionless markets as well.

Taking a cue from pattern analysis the Markets are resisting very much on expected lines to the levels of 8640. It corrected very sharply after testing that level a day before and yesterday, it resisted moving past that level. This is the level that the Markets broke on the downside and therefore it now acts as a resistance. It would be very important for the Markets to move past this level to resume its overall major up trend. Until the Markets move past this level, it will continue to consolidate in a broad range.

Overall, though the bias of the Markets certainly remains on the upside, it is advised to maintain moderate exposures until it moves past 8640. Stock specific action will be witnessed and highly selective purchases may be made as sectoral out performance will continue. Overall, positive optimism is advised for the day. 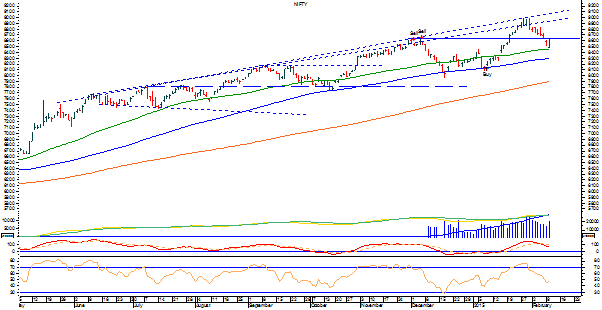 MARKET TREND FOR WEDNESDAY, FEBRUARY 11, 2015
Today, we can expect the Markets to start on a quiet note and look for directions. To the maximum probability, the Markets have attempted to find bottom yesterday and are not likely to test yesterday’s low again even if it continues to consolidate. On its way up, the levels of 8640 will be important levels to watch out for as it will continue to pose resistance at higher levels.

The RSI—Relative Strength Index on the Daily Chart is 47.8776 and it is neutral as it shows no bullish or bearish divergence or any failure swings. The Daily MACD remains bearish as it continues to trade below its signal line.

On the derivative front, the NIFTY February futures have over 1.37 lakh shares or 0.56% in Open Interest. This change is insignificant so far as OI is concerned but it certainly conveys that no major unwinding has been observed yesterday while the Markets pared its gains and short covering caused the last hour pullback.

Returning to pattern analysis, the Markets nearly tested its 50-DMA yesterday and also perfectly resisted to the 8640-level as well. This is the support which the Markets broke on the downside and while on its way up it will continue to pose resistance. For the Markets to move up again and resume its original trend it will have to move past this level and until this happens, it is likely to consolidate and move in a trading range with some amount of volatility ingrained in it.

To sum up, though the Markets have clearly attempt to find a bottom yesterday it is not completely out of woods until it moves past the 8640 levels again with conviction and good participation. Until this happens, it is likely to oscillate in a trading range in volatile manner. Though this is no structural breach on charts, moving past 8640 will be crucially important for the Markets. Refraining from over-exposure and cautious optimism is advised for the day. 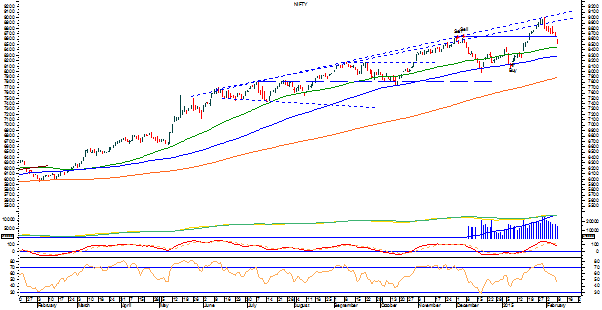 MARKET TREND FOR TUESDAY, FEBRUARY 10, 2015
Markets are likely to remain in little tough spot and we can expect a modestly lower opening today. Most of the Delhi Poll outcome has discounted and with the Markets expected to open lower, it would also attempt to find some stability and attempt to form some  bottom with the levels of 50-DMA continuing to act as important support.

The RSI—Relative Strength Index on the Daily Chart is 45.2858 and it has reached its lowest value in last 14-days which is bearish. However, it does not show any bullish or bearish divergence. The Daily MACD continues to remain bearish trading below its signal line. On the Candles, A falling window occurred (where the bottom of the previous shadow is above the top of the current shadow).  This usually implies a continuation of a bearish trend.
The two candles preceding the falling window were black, which makes this pattern even more bearish.

Taking a cue from pattern analysis, the Markets opened below its important support level of 8640 and declined further from there. This level, on the upside will now act as important. The Markets will remain in intermediate corrective trend until it moves past the level of 8640 on the upside. In event of the Markets continuing with its downtrend, the levels of 50-DMA might be tested. Even if this happens, the Markets will continue with keep its secular trend intact.

Overall, the approach to the Markets warrants heavy caution. It is widely accepted that the outcome of the Delhi polls, even if it does not favour the BJP, will not affect the functioning of the Government at the Centre. It will also not affect the ability of the Government to execute reforms or its stability in the near term but it will certainly affect the sentiments and that is what it is doing currently. However, it will attempt to find bottom after negative opening today. Refraining from aggressive positions is advised for today.