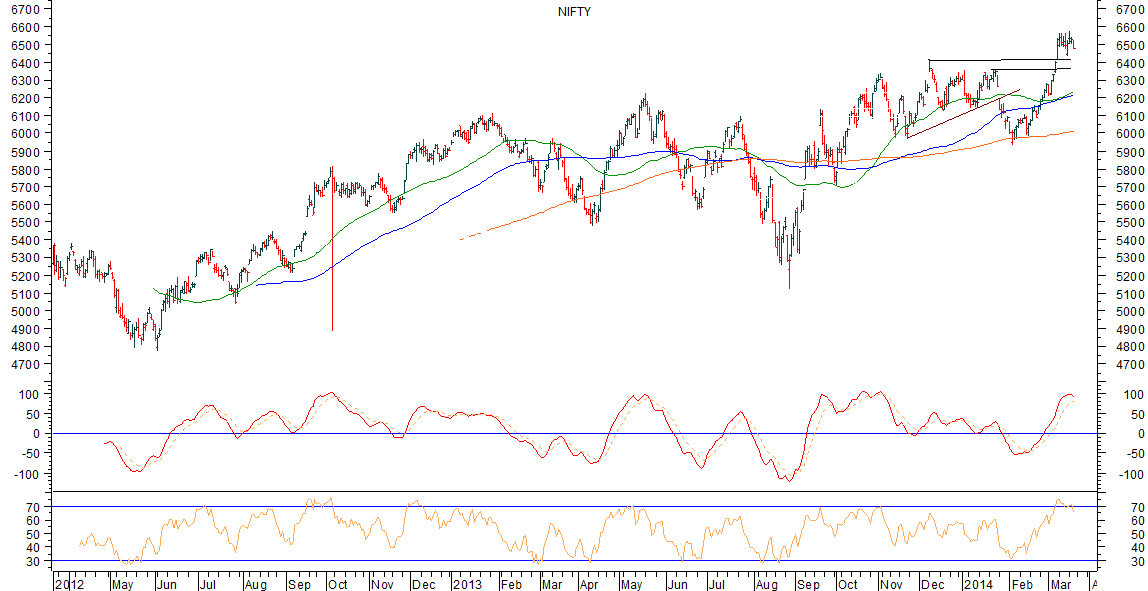 Today, expect the Markets to open on a modestly positive note and look for directions, however, broadly speaking, the consolidation is expected to continue. The Markets are expected to trade positive in opening trade and the intraday trajectory continues to remain critically important along with volumes to decide the trend for today. The Markets continues to trade in a  broad trading range with the levels of 6574 acting as its immediate top.

The lead indicators continue to remain in place. The RSI—Relative Strength Index on the Daily Chart is 65.0513 and has moved out of an oversold area. It remains neutral as it shows no bullish or bearish divergences or any kind of failure swings. The Daily MACD continues to remain bullish as it trades above its signal line. It is moving towards reporting a bearish crossover and if this happens, we might see some longer consolidation periods for the Markets. However, as of now, this has not happened.

On the derivative front, NIFTY March futures have shed over 6.64 lakh shares or 3.33% in Open Interest. This shows some first signs of weariness in the Markets at lower levels and also signifies some shedding of long positions from higher levels.

Going by the pattern analysis, the Markets broke out on the up side from 6415 levels while forming its lifetime highs near 6574. Post this, the Markets have been consolidating in side ward trajectory and currently it continues to trade well above its lower range of the trading range and has shown no technical breach on the Daily Charts.

All and all, the Markets are slated to open modestly positive, but are continue to trade in a range while continuing to remain in the consolidation zone. It continues to trade above its all critical support levels and therefore, in event of any downside that is seen, this should be utilized to make selective purchases. The profits on existing positions needs to be guarded vigilantly and shorts should be strictly avoided. While maintaining stock specific approach, cautious optimism is advised for today. 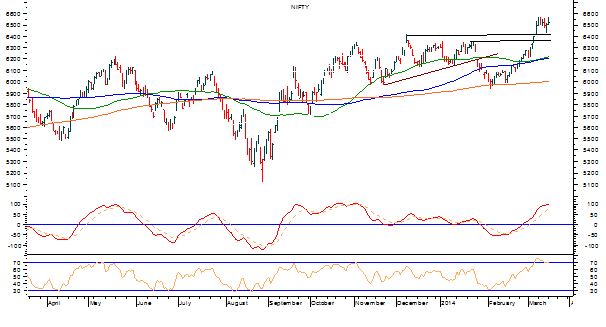 The RSI—Relative Strength Index on the Daily Chart is 70.5868 and it trades in overbought territory again. At the same time, it continues to remain neutral as it shows no bullish or bearish divergence or any failure swings. The Daily MACD continues to trade above its signal line and is therefore bullish.

On the derivative front, NIFTY March futures have added over 2.85 lakh shares or 1.47% in Open  Interest. This signifies that even when the Markets pared its gains during the day, shorts positions have been added and no offloading has been witnessed. The pattern of FIIs selling in futures and buying heavily in cash segment continued.

Going by the pattern analysis, the Markets have given their lifetime highs again in yesterday’s session. However, it has not broken out of the broad trading range that it has been consolidating in. Also, yesterday’s modest up move has once again taken Markets in “overbought” territory. There is a strong likelihood that the Markets still continues to remain overbought and consolidates instead of a clean breakout.

All and all, the “overbought” lead indicators would keep the Markets in check for some more time and keep them in consolidation phase. However, the undercurrent remains extremely buoyant and this would see more or sectoral churning than any major profit taking. It is advised to keep strong vigil on existing profits on higher levels and any downside should be used to make stock specific purchases. While strictly avoiding shorts, positive outlook is advised for today. 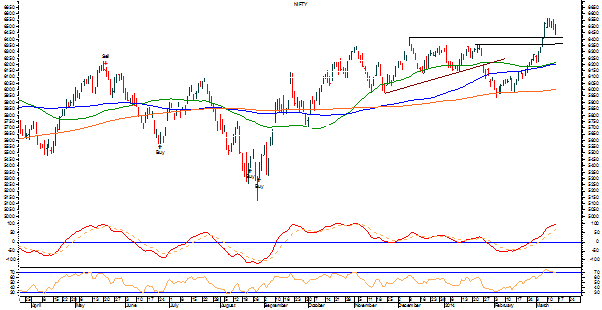 The Markets have enjoyed an extended weekend with Monday being a trading holiday. Today, the Markets are expected to open on a positive note and continue with its up move in the initial trade. The global markets have been supportive and this would get reflected in today’s trade. Though the intraday trajectory would be important to decide the trend for today, more or  less, the Markets would continue to remain in a trading range with up ward bias.

The RSI—Relative Strength Index on the Daily Chart is 69.8475  and it is neutral as it shows no bullish or bearish divergences or failure swings. The Daily MACD continues to remain bullish as it trades above its signal line.

On the derivative front, the NIFTY has shown a very minor decline in Open Interest. This shows that the sharp up move that we saw on Friday has been account of acute short covering and as analysed the FIIs have continued to buy heavily in Cash segment while selling in futures creating shorts which are acting as supports at lower levels.

Going by the pattern analysis, the Markets have broken out on the up side from 6420 levels and has made an immediate top at 6561 levels. The Markets are expected to consolidate in this broad trading rage with a certain upward bias. The Markets are anyway seeing a frequent addition of short positions and this would make the Markets take support at the lower end of the range.

All and all, the Markets are in typical consolidation mode and the bias remains certainly on the upside. This gets confirmed as the Markets sees a sharp rise whenever it approaches the lower end of the trading range. There has been no technical breach on the Charts and the Markets continue to trade above its critical supports. It is advised to refrain from shorts and continue to utilize the downsides in making selective purchases. Overall, positive outlook is advised for today.