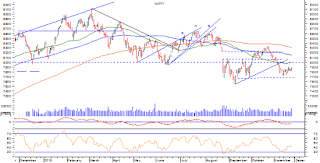 MARKET TREND FOR FRIDAY, NOVEMBER 27, 2015
Markets have seen a relatively better expiry today and the lead indicators suggest formation of positive base for the Markets going ahead. Today, though the Markets are expected to open on a quiet note, there are bright chances that the Markets continue to remain in a broad consolidation zone with a inherent positive bias. The lead indicators and the technical charts suggest limited downside and possibilities of the Markets trading in a congestion zone with undercurrent remaining buoyant.

The RSI—Relative Strength Index on the Daily Chart is 45.7896 and it has reached its highest value in last 14-days which is bullish. Also, RSI has set a fresh 14-day high whereas NIFTY has not done so yet. This is Bullish Divergence. The Daily MACD has reported a positive crossover and it is now bullish as it trades above its signal line. We had reported possibility of a positive crossover in our yesterday’s edition of Daily Market Trend Guide.

On the derivative front, the NIFTY December series have begun with net Open Interest addition of over 47.10 lakh shares or 33.49%. The NIFTY PCR stands at 0.78.

Coming to pattern analysis, the Markets have continued to remain in a broad congestion zone that it has been trading in previous fortnight. Having said this, as mentioned often in our previous editions, the Markets have attempted to form a base and have vigorously attempted to find a bottom for itself. Though it has done this, it is yet to confirm its reversal on the Charts. Until the Markets confirm its reversal, it remains theoretically vulnerable to selloffs from higher levels. However, the technical charts, the lead indicators and the F&O data point towards undercurrent remaining buoyant.

Overall, the Markets shall open flat and trade in a range in the initial trade. However, there are chances that the Markets form a base and attempts further upside. However, until a reversal is confirmed, it will remain vulnerable to volatile movements from higher levels. It is advised to continue to remain stock specific and protect profits at higher levels while maintaining positive caution on the Markets. 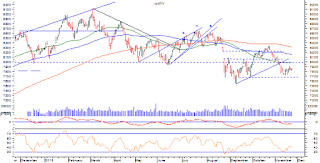 MARKET TREND FOR THURSDAY, NOVEMBER 26, 2015
Markets would open today after a holiday and we enter into expiry of the current November derivative series. The Markets are likely to give a modestly positive opening but at the same time, the session is likely to remain absolutely dominated with rollover centric activity. The F&O data clearly suggest that the Markets may continue to remain and trade in a broad range and is less likely to take any clear directional call.

The RSI—Relative Strength Index on the Daily Chart is 41.2319and it remains neutral as it shows no bullish or bearish divergence. The Daily MACD continues to remain bearish as it trades below its signal line. However, it is important to note and that the Daily MACD is likely to report a positive crossover if there is no significant breach on the Daily Charts.

Coming to pattern analysis, the Markets have spent nearly a fortnight trading in a capped range and remaining in congestion zone. Having said this, as mentioned often in our previous editions, the Markets have attempted to form a bottom but have not confirmed it as of now. It continues to remain in congestion zone and trading in no direction. However, it has maintained so far, a important support level of 7680 levels. In order to avoid any significant weakness, the Markets will have to trade and maintain levels above 7680 in event of any temporary weakness.

Overall, the Markets continue to trade in a congestion zone. Though it has maintained its important pattern support levels so far, it has not confirmed is reversal and therefore it continues to remain vulnerable to selling bouts from higher levels. Being the expiry day today, the Markets remain prone to volatile movements. It is, therefore, reiterated that exposures in Markets should be kept moderate and cautious outlook should be continued while maintaining adequate liquidity. 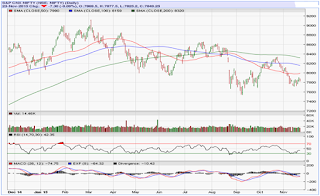 MARKET TREND FOR TUESDAY, NOVEMBER 24, 2015
Markets are expected to open on a quiet to modestly negative note and would trade in a capped range in the initial trade. Today we enter into penultimate day of the expiry of the current series because tomorrow is a trading holiday on account of Gurunanak Jayanti. The F&O data clearly suggest that the Markets are more or less expected to trade in a range and look for directions and no sharp movement either side is expected. However, the consolidating Markets keeps the analysis more or less once again on similar lines.

The RSI—Relative Strength Index on the Daily Chart is 42.3418 and it remains neutral as it shows no bullish or bearish divergence or any failure swings. The Daily MACD continues to remain bearish as it trades below its signal line.

Coming to pattern analysis, the Markets have remained in a narrow 125-odd points range since last couple of sessions and have headed nowhere. The markets consolidated in this narrow range. As mentioned often in our previous editions, the Markets have attempted to form a bottom but have not yet confirmed it. It will have to maintain levels above 7750 and any breach below this will have the Markets test its important pattern support of 7680 levels. However, any major downside is much limited by possibility.

Overall, though the Markets do not seem to show any possibility of major downsides, the upsides too would remain limited and the Markets continue to remain vulnerable to sell-offs from higher levels resulting into some volatility being ingrained in the Markets. The volumes too are likely to remain lower. Therefore, while keeping the overall exposure limited and very stock specific, continuation of cautious outlook is advised for today.


Markets continued to see some short covering from lower levels and also profit booking at higher levels as it ended the day with minor gains after coming off from the high point of the day. The Markets saw a lower opening and while trading in a very capped and narrow range; it formed its intraday low of 7817.80 in the morning trade. It was in the late morning trade, that the Markets saw a sharp rise. It witness a near parabolic up move that not only brought the Markets into the green but went on to form the day’s high of 7906.95. Markets perked up nearly 90-odd points from the low point. However, the Markets failed to sustain those levels. The second half of the session witnessed sideways movement but the Markets slid in the last hour of the trade. It pared nearly all of its gains and finally settled the day at 7856.55, posting a net gain of 13.80 points or 0.18% while forming a higher top and higher bottom on the Daily Bar Charts. 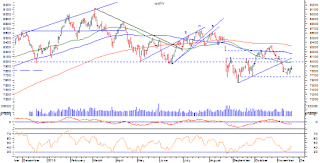 
Today’s session remain important in a different way for the Markets. Today we enter into expiry week of the current derivative series and the Markets have been consolidating while consistently shedding Open Interest in the previous week. Today as well, we are likely to see modestly positive opening and key would be to see if the Markets are able to build up further on these opening gains. The unscheduled meeting of the Federal Reserve will have some effect on the sentiments of the Markets as well.

The RSI—Relative Strength Index on the Daily Chart is 42.7954 and it remains neutral as it shows no bullish or bearish divergence. The Daily MACD remains bearish as it trades above its signal line. On the Weekly Charts, the RSI is 42.5226 and this too remains neutral as it does not show any bullish or bearish divergences.  The Weekly MACD too continues to remain bearish as it trades below its signal line.

On the derivative front, the NIFTY November futures continued to shed over 8.92 lakh shares or 5.35% in Open Interest. The NIFTY PCR stands at 0.78 as against 0.79 on Friday. The Markets have been witnessing a situation wherein it the shorts are grossly uncomfortable on the lower side but in the same breadth, all the up moves have been purely on account of short covering.

While having a look at pattern analysis, the Markets have consolidated all throughout the previous week. Though it has attempted to form a bottom, it has not done so far and is yet to confirm any bottom. For the Markets to confirm its bottom successfully, it will have to maintain supports around 7725 levels in event of any downsides. Any further weakness, if any, will have the Markets test its important pattern supports of 7680 levels. The outcome of the meeting of the Federal Reserve in December will have its sentimental effect on the Markets as well even if the rate hike of 25 bps stands more or less discounted.

Overall, the Markets are likely to continue to trade in a range and it would be important to see if the Markets sustain its likely opening gains and builds up on that. For the Markets to form a bottom successfully, it will require upsides with good participation and fresh longs rather than mere short coverings. Until this happen we will continue to see the Markets vulnerable to sell-offs as we have seen all through previous week. Cautious approach is continued to be advised on Markets today as well.