WEEKLY MARKET OUTLOOK FOR DEC 18 THRU DEC 22, 2017
In our previous Weekly Outlook, we had expressed possibilities of Indian Equity Markets being pushed into some consolidation post finding resistance at higher levels. The Week that has gone by remained quite volatile on after volatile movements on either side, the benchmark NIFTY50 finally ended the Week with a net gain of 67.60 points or 0.66%. This Week’s close was aided with a sharp short covering aided by the outcome of exit polls that showed BJP retaining power in Gujarat. 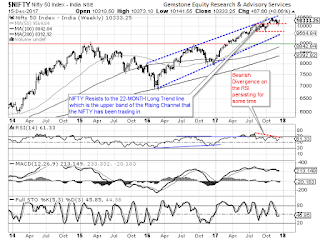 Going into trade on Monday, we are likely to being a positive but volatile start to the week. In all likelihood, we might see some positive opening. Just as the Gujarat Election results / trend start trickling in on Monday, we will see the Markets reacting in a volatile manner. However, if nothing unexpected comes out of it, we will see the Markets inching higher towards its previous high. However, in the same breath, we do not see it posting meaningfully fresh highs in any case.

The Relative Strength Index – RSI on the Weekly Charts is 61.2382 and it remains neutral showing no divergence to the price. The Weekly MACD stays bearish while trading below its signal line. A candle with a long lower shadow occurred on the Weekly Charts. This may mean bullish reversal but it requires confirmation on the next candle.

All and all, we might see some positive start but also expect volatility to remain ingrained in the system. Having said this, if we look at the pattern analysis, we still expect the levels of 10490 resist at higher levels. Also, the lead indicators like RSI remain in a lower top formation and are yet to break out from a range. We expect the short covering that took place in the week that has gone by to be effectively replaced with fresh buying. Until this happens, while selective sector specific purchases may be made, bulk of the up moves should be utilized to book and protect profits. 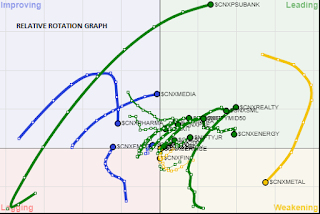 A study of Relative Rotation Graphs – RRG show that along with the broader Markets, the PSUBANK, MEDIA and INFRA stocks will continue to relatively outperform the NIFTY accompanied by the MIDCAPS. We will see METALS continue to lose overall momentum along with PHARMA. Also joining the likely relative outperformers will be the FMCG and NIFTY Junior Pack. Along with PHARMA, not meaningful up move is likely in AUTO and Financial Services pack on weekly bias. IT is expected to consolidate with a positive bias.

MARKET OUTLOOK FOR FRIDAY, DEC 15, 2017
Volatility ruled the roost on Thursday as the benchmark NIFTY50 swung either side in a deeply volatile manner and finally ended the day with a gain of 59.15 points or 0.58%. The Markets have reinforced the credibility of the support of 50-DMA at Close levels and also that of 10180-10200 range support area. Before ending the benchmark Index recovered nearly 110-points from the lows of the day. Going into trade on Friday, we expect this pullback to continue. The Exit Poll’s outcome of the BJP retaining power in Gujarat will also set to sentimentally aid the session on Friday. In any case, the levels of 10330-10360 still require to be crucially monitored. 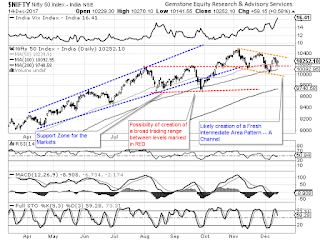 The Relative Strength Index – RSI on the Daily Chart is 50.9371 and it continues to remain neutral showing no divergences against the price. The Daily MACD stay bearish trading below its signal line but it is moving very sharply towards positive crossover. On the Candles, a long lower shadow emerged. It potentially marks a reversal of the trend. It remains significant as it has emerged near the support zone of 10180-10200 area.

While we face Friday’s trade, a positive opening aided by outcome of all Exit Polls which favor BJP retaining the power in Gujarat may not be ruled out. However, on the upper side the resistance still exit in the area of 10330-10360. The NIFTY continues to trade in a falling channel which has emerged as an intermediate trend. We recommend making very select purchases. Cautiously positive outlook is advised for the day.

MARKET OUTLOOK FOR THURSDAY, DEC 14, 2017
The NIFTY50 continued with its losing streak on Wednesday as the benchmark Index closed further losing 47.20 points or 0.46%. What seemed to be a classical recovery in the first half of the session, turned highly disappointing as the Index lost over 125 points from the high point of the day. Volatility ruled the roost as the Markets modestly breached the 50-DMA support at Close but stayed within its filters. Caution weighed heavy ahead of Gujarat poll survey and Fed Interest rate decision wherein a rise of 25 bps is discounted for. 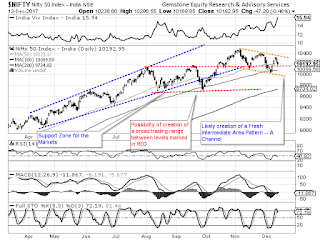 Going into trade on Thursday, we might see the Markets attempting to stabilize an attempt to find some base again. The Markets have ended just a notch below its 50-DMA but has remained within its filter and has held the support zone of 10180-10200. We expect a modestly positive opening tomorrow and the levels of 10180 and 10110 will hold out as extremely important supports.

The Relative Strength Index – RSI on the Daily Chart is 46.9237 and it stays neutral showing no divergence against the price. The Daily MACD continues to remain bearish while trading below its signal line. No significant formations were seen on Candles.

All and all, the NIFTY on Thursday will face little tricky situation. It would  be of paramount importance for the Markets not to significantly breach the 10180-10200 support zones. If this happens, we will see some more weakness persisting in the near term. However, there is a silver lining in form of much lower-than-average volumes in the previous two declines that the Markets saw. Also, the shorts that exist in the system can lend support in case of extended weakness. Overall, we recommend staying away from taking any major exposure in the Markets and adopt wait-and-watch approach with a cautious view for the day.

MARKET OUTLOOK FOR WEDNESDAY, DEC 13, 2017
After three days of a pullback, the Indian Equity Markets snapped its rally and saw some corrective pressure coming in. The benchmark Index NIFTY50 ended the day losing 82.10 points or 0.80%. The Markets had seen a technical pullback of 300-odd points  from the recent lows but on Tuesday, it gave up a quarter of its recovery. Going into trade on Wednesday, we expect a quiet start to the session. The Index has taken support at its 50-DMA and this level would be important to watch for at Close levels. However, some corrective pressure may remain on the Markets but any breach below 50-DMA will take the Markets lower. 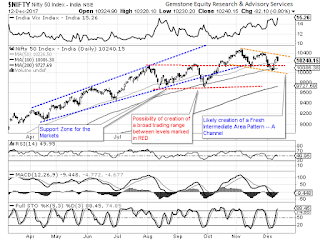 The Relative Strength Index – RSI on the Daily Chart is 49.9515 and it stays neutral showing no divergences against the price. The Daily MACD is currently bearish trading below its signal line but it is sharply moving towards positive crossover in coming days. An Engulfing
Bearish Candle has emerged. However, this formation cannot be read in an isolated manner. It should be read in context of the overall structure of the Charts and its place of occurrence. In the current scenario, its formation remains insignificant.

The pattern analysis shows the Markets remaining in the falling intermediate channel on the Daily Charts.  It continues to face resistance in the 10360-10380 levels.

Overall, the weakness that we saw in the Tuesday’s session came in little early. Resistance was expected but it was expected in the 10360-10380 zones. These levels will still continue to pose resistance to any pullback that the Markets may see. The Markets are in very close vicinity of the 50-DMA and this would be an important support to watch at the Close levels. Any meaningful breach below 50-DMA might induce some more weakness in the Markets. We advice a cautious view on the Markets, we also recommend keeping overall exposures modest while avoiding shorts.

MARKET OUTLOOK FOR TUESDAY, DEC 12, 2017
Despite some volatility that the session on Monday displayed, the benchmark NIFTY50 continued to show strength and the pullback continued as the Index ended the day with a decent gain of 56.60 points or 0.55%. As of Monday’s close, the Index has pulled back nearly 300-points. Not only the validity of the support of 100-DMA has been reinforced, the Index shows potential to test the upper trend line of the intermediate channel that it has formed. While we step into trade on Tuesday, we expect the Markets to open on a quiet to modestly positive note. We expect some morning gains coming in. There is clear room for the Markets to continue its up-tick but the levels of 10360-10380 will be crucial levels to watch and the Markets may find some resistance there. 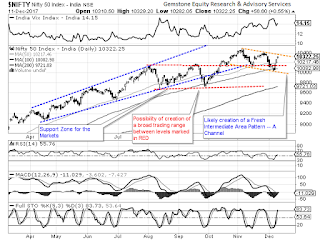 The Relative Strength Index – RSI on the Daily Chart 55.7629 and it continues to remain neutral against the price for today. The Daily MACD is still bearish and trading below its signal line but it is sharply narrowing its trajectory. On the Candles, once again, a Rising Window occurred. This implies continuation of the uptrend that the Markets are currently witnessing.

The pattern analysis clearly depicts the Markets remaining in the intermediate falling channel that it has formed. This is a falling channel, an intermediate one, created after forming highs at 10490. Currently, the Daily RSI is still seen making lower highs and it is yet to breach out of a formation. Until this happens, we can expect the Markets to face resistance at higher levels.

Going by the overall structure of the Charts, we might see some more up move coming in. We expect the pullback to continue but in the same breath, we also expect the Markets to face resistance around 10360-10380 levels. If the Markets face resistance around these levels, then the current falling channel on the Daily Chart which has emerged as an intermediate trend will remain valid. It would be crucial to see Markets going beyond these levels. We continue to recommend remaining highly stock specific. Picking right stocks and protecting profits at higher levels will remain crucial as we face Markets in coming days.

MARKET OUTLOOK FOR MONDAY, DEC 11, 2017
On expected lines, the session on Friday saw the Indian Equities firmly advancing their follow-through up move as the Index ended the session gaining 98.95 points or 0.97%. The session was important in many ways as the up move not only firmly validated the support of 100-DMA at Close levels once again but also ended well above the 50-DMA and back in the intermediate falling channel that it has created. Going into trade on Monday, we expect that there is some more room left for the Markets to inch higher. We expect a flat to modestly positive start to the trade and expect the benchmark Index NIFTY50 to continue with its up move. However, at higher levels, we might see NIFTY encountering some resistance. 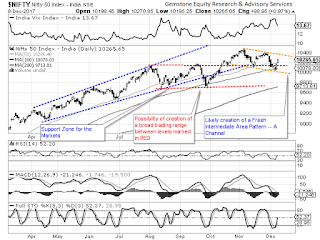 The Relative Strength Index – RSI on the Daily Chart is 52.2031 and it stays neutral against the price for today. Daily MACD is bearish as it still trades below its signal line. On the Candles, a “Rising Window” emerged. This is a kind of continuation gap on the current charts and usually implies continuation of the up move.

While having a look at pattern analysis, it is evident that the Markets have formed an intermediate channel from the high levels of 10490. As of now, the Markets have inched up once again and trade above all its Moving Averages. The lead indicators are still under a pattern formation involving lower tops and this may see the Markets encountering resistance once again at higher levels.

All in all, we expect a quiet start to the week with a positive bias but also expect the Markets to face resistance going ahead. We recommend avoiding shorts but also recommend continuing to remain highly selective and vigilantly protect profits at higher levels. Cautiously positive outlook is advised for the day.