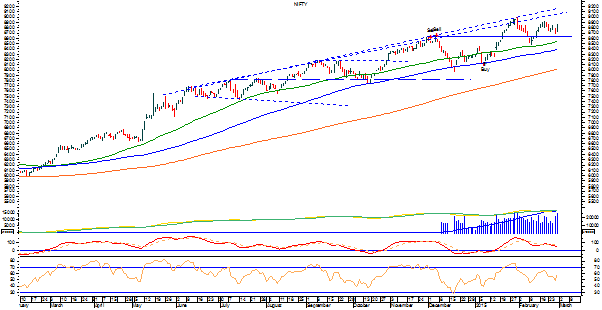 MARKET TREND FOR SATURDAY, FEBRUARY 28, 2015
Today, the Markets would witness a major economic event, Union Budget which shall be presented later today. The Markets are open today on account of this. We can expect the Markets to open on a positive note and look for further directions from the Budget.  We can expect to see a ranged trade in the morning session and the volatility is slated to increase as the proposals start pouring in. The Markets are approaching Budget with great hops and slightest failure of the Government to meet the “hype” that has been created would be detrimental to the Markets in the immediate short term.

The RSI—Relative Strength Index on the Daily Chart is 58.6169 and it remains neutral without showing any bullish or bearish divergence or failure swings. The Daily MACD still continues to remain bearish trading below its signal line.

On the derivative front, the NIFTY March futures have added over 2.08 lakh shares or 0.87% in OI. This OI addition is little insignificant in relation to the up move that was witnessed in yesterday’s session.

Returning to pattern analysis, the Markets are still within its primary uptrend and trades above its critical support levels. Further, they are yet to approach its rising upper trend line and the possibility of the Markets resisting to this pattern resistance still remains a theoretical possibility. So, if we look only at patterns, the Markets would find resistance at 8920 and 8995 levels going ahead. With absence of any negative triggers, the Markets will have enough steam left to test the 9000-levels.

All and all, today’s session will have good amount of volatility ingrained in it. While the Markets digest the proposals, wide trading ranges are likely to occur. Further, with the Markets still having theoretical possibility to resist to the upper rising trend lines, it is advised to keep reducing positions and protects profits with each up move. Once the Markets fully digest the Budgets, fresh purchases should be planned. It is advised to approach the Markets with cautious optimism today.


Markets grew extremely cautious ahead of Budget and grew equally volatile on the expiry day yesterday as it ended the day on a bearish note with losses. The Railway Budget which came up failed to provide any cheers to the Budget as it continued to elevate its caution levels ahead of Union Budget tomorrow. After opening on a mildly negative note, the Markets traded sideways with some amount of capped losses in the morning trade. While the Railway Budget started, Markets saw some more weakness creeping in and by late afternoon trade it went on to form the day’s low of 8669.45. Markets did see some amount of recovery happening in the final hours of the trade and it did manage to recover major part of its losses but the last thirty minutes of the trade again saw the Markets paring that recovery. It finally ended the day at 8683.85, posting a net loss of 83.40 points or 0.95% while forming a lower top and lower bottom on the Daily Bar Charts. 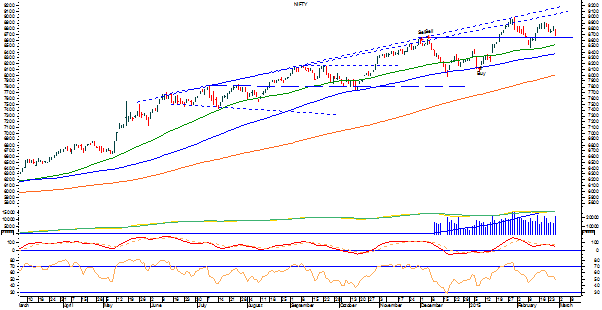 
Today, expect the Markets to open on a mildly positive note and trade stable at least in the initial trade. We can expect some amount of stability coming in but at the same time, high and elevated amount of caution would continue to dominate the Markets. It would not be surprising if the Markets tests its important supports of 8610-8640 levels. However, at present, it trades near its important pattern support and this can lend some stability to the Markets.

The RSI—Relative Strength Index on the Daily Chart is 49.0991 and it remains neutral without showing any bullish or bearish divergence or any failure swing. The Daily MACD remains bearish trading below its signal line.

On the derivative front, the NIFTY March futures have begun by adding over 42.18 lakh shares or 21.34% in Open Interest.


Returning to pattern analysis, the Markets continue to trade above all of its three moving averages and above its important pattern supports of 8610-8640 range. The current structure of the Charts continues to put the Markets in a broad consolidation phase while keeping its overall  up trend intact. 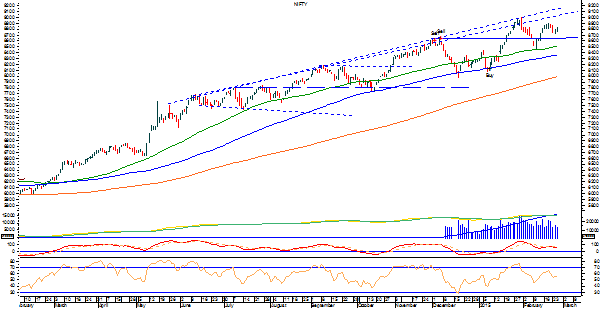 MARKET TREND FOR THURSDAY, FEBRUARY 26, 2015
Today, we enter into expiry of the current derivative series. Over and above all, we begin a three days of eventful remaining week as well. First Railway Budget from the current government comes up today later. The Markets are likely to open on a flat note and is expected to trade in a range and would see volatile movements as the proposals start pouring in. Coupled with this, being expiry today, we would continue to see the session heavily dominated with rollover centric activities.

The RSI—Relative Strength Index on the Daily Chart is 55.2173 and it is neutral as it shows no bullish or bearish divergence or any failure swings. The Daily MACD remains bearish trading below its signal line.

On the derivative front, the NIFTY February futures shed over 33.41 lakh shares or 23.32% in OI wherein the March series added over 43.96 lakh shares or 28.61% in Open Interest. The rollovers have continued to remain higher than their 3-month average and indicate a bullish under tone.

Overall, keeping the analysis more or less on similar lines, we continue to reiterate our advice to refrain from creating over-exposures in the Markets. Buying should be restrained to very selective stocks. While continuing to keep overall exposure at as much moderate levels as possible, cautious optimism is advised for the day.


The Markets had a very flat and range bound session and it ended the day with minor gains after spending the entire session in sideways trajectory. The Markets saw a quiet and flat opening on expected lines as it opened modestly positive. Post this modest opening, the Markets continued to spend the first half of the session in a much capped range in sideways trajectory while going briefly into the negative zone couple of times. The afternoon trade saw some up move while the Markets formed the day’s high of 8800.50 but these levels were not sustained as the Markets pared those gains and traded flat again. It further dipped into negative and soon formed the day’s low of 8726.75. Once again, some recovery was seen and the Markets finally settled the day at 8762.10, posting minor gains of 7.15 points or 0.08% while forming a lower top and lower bottom on the Daily Bar Charts. 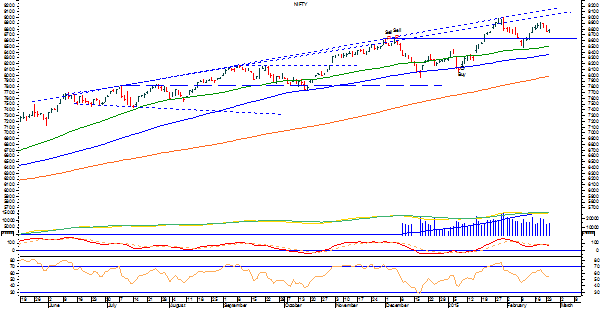 
Today, expect the Markets to open on a positive note and trade positive at least in the initial trade. We also enter into penultimate day of expiry of current February series and we would see the trading session continuing to remain dominated with rollover centric activities. The Markets are more or less likely to remain in a ranged consolidation in this heavily eventful week comprising of derivative series expiry, Railway Budget, Economic Survey and finally the Union Budget.

The RSI—Relative Strength Index on the Daily Chart is 54.8950 and it is neutral as it shows no bullish or bearish divergence or any failure swing. The Daily MACD remains bearish while trading below its signal line.

On the derivative front, the NIFTY February series shed over 38.24 lakh shares or 23.15% while March series added 51.17 lakh shares or 49.92% in Open Interest. NIFTY rollovers and Market wide rollovers have been above its 3-months average and buying from lower levels have been observed. NIFTY PCR stands at 0.85.

Coming to pattern analysis, the Markets have remained in a rising channel but after the decline on Monday, 23rd of February; it has shown signs of mild weakness after some consolidation. It has formed, what is called in technical jargon, a “inadequate rise”, i.e. a top lower than its previous top which is its lifetime highs. Such formations either tend to alter the intermediate trend, or at least keeps the Markets in consolidation for some more time.