MARKET TREND FOR FRIDAY, AUGUST 12, 2016
Last hour recovery in the Markets helped it to end the day with modest gains but it continued to remain in corrective mode. Today as well, we continue to keep our analysis on similar lines. Today, we can expect the Markets to once again open on a mild to modestly positive note but overall, it will continue to remain under consolidation. Though it has attempted to find a minor bottom yesterday, any runaway up moves still cannot be expected. 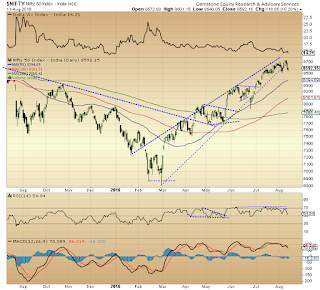 The RSI—Relative Strength Index on the Daily Chart is 54.8391 and it remains neutral as it shows no bullish or bearish divergence or any failure swings. The Daily MACD stays bearish as it trades below its signal line. On the candles, though it is not at a Classical Hammer, a small hammer-like formation raises some hope of a potential bottom formation. Though it need confirmation by any means.

On the derivatives front, the NIFTY August futures have remained nearly unchanged as it shed 57,300 or just 0.22% in Open Interest. The Open Interest too remains unchanged.

Coming to pattern analysis, the Markets have fallen out on the downside from the upward rising channel drawn from the February lows. As mentioned often in our previous editions, this Channel was getting narrower with each passing day and a sharp either side movement was expected. This happened on the downside as the Markets were anyway showing signs of a fatigue. This has made the levels of 8700-8715 an interim top for the Markets for the immediate short term. No runaway moves will be expected until the Markets moves past these levels. However, again as mentioned often in our previous editions, with the overall inherent structure of the Markets remaining buoyant, these corrections will be met with relatively limited downsides and some range bound consolidation.

Overall, keeping the above in view, we reiterate our analysis to use all possible upsides to vigilantly protect profits at higher levels while continuing to utilize all downsides to make fresh selective purchases. However, given the fact that volatility will continue to remain ingrained, major shorts should be avoided and higher proportion of liquidity should be maintained while adopting a cautious outlook on the Markets given the long weekend next week as Monday will remain a trading holiday on account of Independence Day.

MARKET TREND FOR THURSDAY, AUGUST 11, 2016
Markets showed some serious signs of correction yesterday and this very much remained on expected lines as it was explicitly showing signs of fatigue as mentioned in our previous editions. With yesterday’s correction,  the Markets have established the levels of 8700-8715 as intermediate top for the Markets in the immediate short term. We will not see any serious up move in the Markets until these levels are comprehensively breached. Today, we can expect the Markets to show a modestly positive opening however, the mentioned levels will continue to act as resistance. 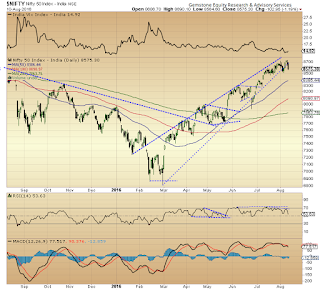 The RSI—Relative Strength Index on the Daily Chart is 53.6301 and it has reached its lowest value in last 14-days which is bearish. Also, the RSI has set a fresh 14-period low whereas NIFTY has not yet and this is Bearish Divergence. The Daily MACD stays bearish as it trades below its signal line. With the Big Black Candle occurring it has established the credibility of the resistance area of 8700-8715 levels.

Coming to pattern analysis, the Markets have broken on the downside of the upward rising channel drawn from February lows. We had categorically mentioned in our yesterday’s edition that the Channel has been growing narrower with each passing day and because of this some sharp either side movements in the Markets cannot be ruled out. With yesterday’s decline, as mentioned earlier, the Markets have established the levels of 8700-8715 as its immediate top in the coming short term. We will not see any runaway up moves until these levels are breached comprehensively. However, there are chances that we will see some range bound consolidation rather than any major declines as inherent structure of the Markets continue to remain intact.

Overall, some amount of weakness might persist in the Markets. But given the fact that there is no structural damage on the Charts, the corrective actions might get restricted to limited declines and range bound movements. It is advised now to use every possible dip to make selective purchases. A selective approach with positive caution is advised for today.

MARKET TREND FOR WEDNESDAY, AUGUST 10, 2016
Though the Markets saw a modest decline yesterday, it came off nearly 40-odd points from the low point of the day before Close. The Markets continued its consolidation keeping the levels of 8700-8720 intact as resistance. Today, we are once again likely to see a modestly positive to flat opening in the Markets. We are likely to see the Markets trading mildly positive in the initial trade but the levels mentioned will continue to act as immediate resistance to the Markets. 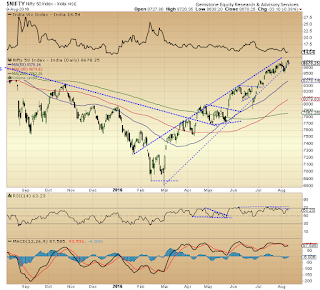 The levels of 8720 and 8745 will act as immediate resistance levels for the Markets today. The supports will come in lower at 8640 and 8585 levels.

The RSI—Relative Strength Index on the Daily Chart is 63.2335 and it remains neutral as it shows no bullish or bearish divergence or any failure swing. The Daily MACD stays bearish as it trades below its signal line.

On the derivative front, the NIFTY August futures have shed 29,250 shares or 0.12% in Open Interest. With the OI remaining nearly unchanged, the NIFTY PCR has come down a bit at 0.98 as against 1.0 yesterday.

While having a look at pattern analysis, the Markets have continued to remain within the upward rising channel drawn from February lows. However, this time, it has tested the lower range of that channel. Having said this, it becomes important to note that this channel is getting narrower with each passing day and therefore the distance or the size of the peaks and troughs have been narrowing. Given this fact in view, it will not be a surprise if the Markets either gives a sharp directional bias in coming days or gets flat in a sideways consolidation which will last longer than usual.

Overall, keeping in line with our previous analysis carried out we reiterate the use of all up moves to protect existing profits. Fresh purchases may be continued but it is advised to remain vigilant at higher levels and profits should be protected. Sectoral and stock specific performance is likely to continue. Overall, positive caution is advised for the day.

MARKET TREND FOR TUESDAY, AUGUST 09, 2016
The Markets did not give a runaway rise yesterday as it consolidated at higher levels. Though it posted fresh 52-week high, the levels of 8710-8720 continued to remain sacrosanct as the Markets ended the day with modest gains. Today, we can expect a flat start to the Markets and the Markets may remain  range bound in the initial trade and the levels mentioned will continue to act as immediate resistance to the Markets. The RBI comes up with Credit Policy Review later in the morning and the Markets will react to that as well. 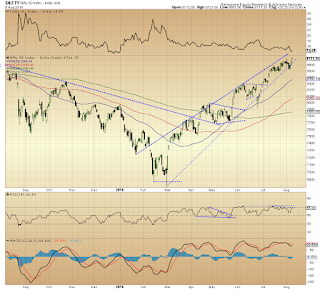 The RSI—Relative Strength Index on the Daily Chart is 66.8049 and it does not show any failure swing. However, NIFTY has formed a fresh 14-day high but RSI has not and this forms a Bearish Divergence on the Daily Charts. The Daily MACD stays bearish as it continues to trade below its signal line. A Doji on the Candles implies a potential halt to the up move in the Markets. However, this needs confirmation.

On the derivatives front, the NIFTY August futures have added over 7.05 lakh shares or 2.95% in Open Interest. The NIFTY PCR stands at 1.0 as against 0.97 yesterday.

While having a look at pattern analysis, the Markets have not given a runaway rise and the levels of 8711 were not breached comprehensively yesterday. Though the Markets did form a fresh 52-week high but it ended the day coming off from its intraday high and this keeps the previous level intact as immediate resistance for the Markets. For any sustainable up move to occur, the Markets will have to move past 8711-8725 range comprehensively. Until this happens, the Markets will either continue to remain in the consolidation zone or will remain vulnerable to intermittent selloffs from higher levels.

Overall, the Markets may attempt a fresh up move but until the mentioned levels are breached comprehensively, the Markets may continue to consolidate and volatility will remain ingrained in it as well. The RBI’s Credit Policy review is likely to remain a non event as not rate cut is expected. We continue to reiterate to use all up moves more to protect profits while keeping fresh purchases highly selective and stock specific.

MARKET TREND FOR MONDAY, AUGUST 08, 2016
The Markets saw a robust pullback after four days of consolidation and ended the day on a fresh 52-week high on Closing basis. Today as well, we can fairly expect the Markets to open on a positive note and there are high chances that its tests its fresh 52-week high once again and moves past its previous immediate high of 8711. The key would be to see if it sustains its expected opening gains and builds on that. If it does, we can see the Markets tracking the upper end of the rising channel again. 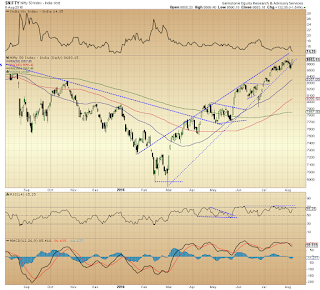 The RSI—Relative Strength Index on the Daily Chart is 65.2523 and it shows no failure swings. However, the NIFTY has made a fresh 52-week high but RSI has not and this shows
Bearish Divergence on the Daily Charts. The Daily MACD stays bearish as it continues to trade below its signal line. On the Weekly Charts, the Weekly RSI is 69.2181 and it has reached its highest value in last 14-period which is bullish. It does not show any bullish or bearish divergence. The Weekly MACD remains bullish as it trades above its signal line.

On the derivative front, the NIFTY August futures have added over 2.46 lakh shares or 1.04% in Open Interest. The NIFTY PCR stands at 0.97 as against 0.88 on Friday.

Coming to pattern analysis, with the Friday’s pullback, the Markets have once again brought itself back into the upward rising channel drawn from February lows. However, the band of the channel is continuing to narrow and the Markets are expected to track the upper end of this channel. However, it becomes important to note that the Markets have high probability to marking fresh 52-week highs but in the same breath, it would be equally critical to see if it sustains and builds on the opening gains and capitalizes later. If it does so, then the Markets may test the next logical targets of  8765 and 8800 in coming sessions.

RBI comes up with the Credit Policy review tomorrow and the rates are expected to remain unchanged. The Markets have discounted a no hike in the rate and other thing would be a news factor for the Markets. We reiterate to continue to make stock specific purchase at any levels with any dip and equally continue to use up moves to protect profits at higher levels. The inherent structure of the Markets remains intact. Positive outlook is advised for today.