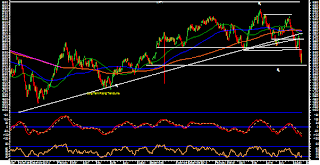 Today, expect the Markets to open on a flat note and look for directions. Apart from the domestic factors that may continue to affect the Markets, the global markets continue to paint a stable picture this morning. The intraday trajectory would be critical for today post opening. Any gains made, would required to be sustained to built up on the attempt of recovery made yesterday.

The lead indicators remain neutral. The RSI—Relative Strength Index on the Daily Chart is 36.1519 and it is neutral as it shows no bullish or bearish divergence or any failure swings and is therefore neutral. The Daily MACD is bearish as it continues to trade below its signal line.

On the derivative front, NIFTY August futures have shed over 6.85 lakh shares or 2.83% in Open Interest. This signifies that short covering had some role to play in yesterday’s up move. As usual, we need to see the Markets get nervous again or we see some more fresh buying coming in at these levels.

Overall, the Markets just have no consensus so far as directional trend is concerned. On each working day it has been defying the technical indicators as well as the derivative data inputs. However, though this has made the recent sessions volatile we need to see if yesterday’s attempt to recover is continued and sustained today.

All and all, as just mentioned above, with the directional consensus not established as yet, even if the Markets trades near oversold levels, we would still advice retail traders / investors not to pile up any aggressive positions on either side. The reversal is attempted, but we need to see if the same is confirmed in coming days. Remaining light on positions while maintaining liquidity to protect open positions is advised for today along with maintaining cautious optimism for today. 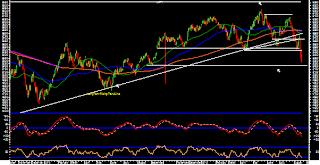 After yesterday’s decline, the Markets have entered the “oversold” territory on the Daily Charts while once again adding “massive” open interest across the board in NIFTY as well as select stocks in the derivative segment. The analysis for today again remains more or less on similar lines. The Markets have been blatantly flouting all technical indicators. It is likely to do it again today as well. We can expect a weak opening today again, but at the same time, the opening can be around yesterday’s low levels and see some chances of recovery “purely on technical grounds”.

Today, the levels of immediate resistance for the Markets are 5504 levels. The supports come in at 5460 and 5435 levels.

The lead indicators are grossly oversold. The RSI—Relative Strength Index on the Daily Chart is 28.2431 and it does not show any failure swings. The NIFTY has made a fresh 14-week low but RSI has not and this is a clear “Bullish Divergence”. The Daily MACD trades below its signal line and moving fast towards being “oversold”.

On the Candles, An Engulfing Bearish Pattern has occurred. If the engulfing bearish pattern occurs during a downtrend (which appears to be the case with NIFTY), it may be a last engulfing bottom which indicates a bullish reversal.  The test to see if this is the case is if the next candle closes above the bottom the current (black) candle's real body.

On the derivative front, the NIFTY August futures have added over 34.44 lakh or massive 16.57% in Open Interest. This indicates that there has been a massive addition of fresh shorts in the Markets again.

Overall, there is very little that an analyst can add here on technical grounds. The Markets are “oversold”, have added “massive” open interest and thereby shorts over last couple of sessions. Almost over 90% of the Index components trade “deeply oversold”. Also, these current valuation discount all fears of the Fed tapering, account deficit, and other such external fears. The Markets would continue to see such pressure being exerted and this cannot be determined by any technical reading.

HOWEVER, speaking on technical grounds, we can certainly point out that there are very high chances that the Markets see a very sharp and equally nasty pullback either later today or in coming days. The Markets sits in oversold territory and in such times,  a pullback remains imminent even while being in a continuing downtrend. All we can advice retain traders / investors is to refrain from making shorts. Fresh purchases too should be avoided and liquidity should be preserved to protect positions until directional bias and external pressure gets exhausted and the Markets comes within the technical ambit. Overall cautious outlook is advised for today. 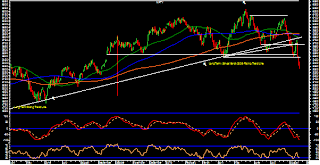 The Markets are expected to continue to remain in recovery mode and see a relief rally today. Expect the Markets to open on a positive note and continue with the up move, at least in the opening trade. The sustenance the opening gains would be crucial. This positive opening and the likely sustenance can be attributed to the technical indicators which are almost Oversold and also to the RBI announcements that can bring some positive sentiments back.

The lead indicators continue to remain almost oversold and show a positive bias towards recovery. The RSI—Relative Strength Index on the Daily Chart is 31.6420 and it does not show any failure swings. The NIFTY has reached its lowest value in last 14-days but RSI has not. This is Bullish Divergence. The Daily MACD continues to trade below its signal line and is moving towards oversold territory.

On the derivative front, NIFTY August futures have added over 16.02 lakh shares or 8.35% in Open Interest. This is a very good sign as it signifies that the yesterday’s pullback has been with fresh buying and not just because of short covering. In Stocks, total OI has been added by over 3.5 crores shares.

The Markets have behaved almost in line with what was analysed in our yesterday’s edition of Daily Market Trend Guide. Today as well, the analysis remain more or less on similar grounds. The Markets which are nearly oversold will attempt a pullback. It did so yesterday and today is likely to continue with that with the lead indicators showing a positive bias. The immediate travel for the Markets can be up to the double bottom support that it broke on the down side.

All and all, relief rally is likely to day. As mentioned earlier, sustenance of the opening gains would be crucial. We would still advice to exercise caution while make fresh purchases as the Markets are attempting a pullback but has not confirmed any trend reversal. Such trend reversal can be confirmed after few trading session ahead. It is also advised to cover shorts wherever they exists at cost and adequate liquidity should be provided for to protect current positions. Overall, cautious optimism is advised for today.

The Markets saw total mayhem and mindless activity yesterday as it fell sharply for the third day in a row to end the day with losses. The Rupee yo ended below the 63 levels, its worst single day fall in last 18 years which added fuel to the fire yesterday.

Today, this mayhem is likely to continue. However, if analysts have any role to play in such Markets which is grossly and overly over reacting as all the negatives stand clearly discounted at current levels, all that can be analysed that all factors, technical and fundamental stands discounted at these valuations. However, the Markets to blatantly flout and defy all technical and fundamental considerations.

The Markets stands nearly oversold. With today's negative opening on cards, the opening levels of the Markets will make it OVERSOLD once again. The RSI on the Daily Charts stand at 32.12 and continues to show bullish divergence as the Markets have made a new 14- day low but the RSI has not.

The derivative segment to have added massive open positions with NIFTY futures halved added over 15.66 lakh shares or over 8.89% in open interest which show very clearly that creation of shorts is in full swing.

Such situation forces us to think on one thing, if we leave both short term technical and fundamental issues aside. We are going back to year 1991 economic state of affairs, though not that bad. PM Manmohan Singh, who took over then as a Finance Minister worked wonders for the Indian Economy. The is a very sad fact to acknowledge that the same person, in capacity of a PM is able to do very little. The sad reason of this fact is that at that time, he had total political insulation under the reigns of the then PM PV Narsimha Rao. He could do what was economically correct.Today, the same man, with all his capabilities stands isolated between bunch of people who have put their political agenda ahead of the country's growth.

All and all we continue to maintain that the retail traders / investors should stay away until the Markets stabilizes. We would advice bargain hunting at lower levels as the Markets have been defying technicals. It is strongly advised to stay away from such Markets. Instead of making fresh purchases, liquidity should be maintained and preserved to protect current positions.


The Markets suffered from gross overreaction on Friday as it had one of the worst sessions in recent past as it ended the day with loss of 234.45 points or 4.08%.

It is MORE THAN EVIDENT that the the Markets have grossly over reacted and misinterpreted the RBI's measure to control volatility in the currency markets. The measures are seen more as steps to bring the capital controls back which were gradually lifted since 2004.

Today we might see some modestly negative opening or some opening nervousness in the Markets but the Markets have ended near their important double bottom support again. All the recovery that was seen in last 4 sessions was wiped off in a day and that has happened, in our opinion, is STRONG defiance of technical indicators.

Today, the RSI on Daily Charts stands at 35.66 and it shows as bullish divergence as the RSI has not reported a 14-day low but the Nifty has done so.The same scenario is seen on the Weekly Charts as well.

On the Derivative front, the Nifty futures have added 27.12 lakh shares or a massive 18.27% in open interest which shows massive build up of short positions.

If technical indicators are to be relied upon, we would very clearly advice the retail traders and investors to refrain from active participation in the Markets. Shorts should be definite avoided. Fresh long positions should be taken ONLY IF liquidity permits or else liquidity should be maintained to protect current open positions.