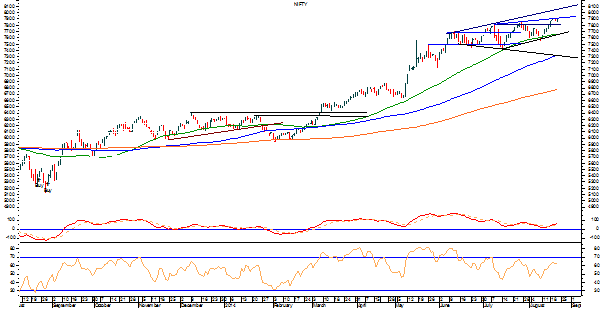 Today’s analysis would remain more or less on similar lines that of yesterday. We can expect the Markets to open on a flat and quiet note and look for directions. The Markets continue to resist to a trend line drawn within a broad formation and therefore the intraday trajectory and the volumes would play a major role in determining trend for today. Volumes remained a concern in the yesterday’s trade.

The RSI—Relative Strength Index on the Daily Charts is 62.5897 and it is neutral as it shows no bullish or bearish divergence or any failure swings. The Daily MACD remains bullish as it trades above its signal line.

On the derivative front, NIFTY August futures have shed over 3.85 lakh shares or 2.56% in Open Interest. This implies some unwinding of long positions in the current derivative series.

Looking at the trend and pattern analysis, while remaining in the overall broad formation, the Markets have resisted to a trend line drawn within that. Further to that, for any up move to occur, volumes / participation would play a major role and this is what is seen on lower side since last couple of sessions. However, even with immediate or short term up move, the Markets would continue to remain in the major broad formation.

Overall, today’s strategy would remain more or less on similar lines. More emphasis should be laid on defensives while taking long positions or if not this then they should be taken ultra selectively. This is because the Markets show all sings of continuing with consolidation but stock specific out performance would continue. Overall, continuance of cautious optimism is advised for today. 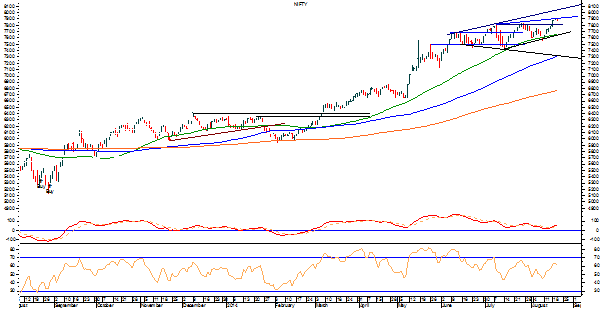 Today as well, we can fairly expect the Markets to open on a quiet note and look for directions in the initial trade. There are chances that the Markets continue to consolidate and even see mild correction from higher levels in case of an up move. There would be likely shift in the sectoral performance and the Markets are likely to remain in overall pattern formation.

The RSI—Relative Strength Index on the Daily Chart is 61.7395 and it remains neutral showing no bullish or bearish divergences or any failure swings. The Daily MACD remains bullish trading above its signal line.

On the derivative front, NIFTY August futures have shed nearly 1.58 lakh shares or 1.04% in total open interest. This signifies that there has been some profit taking that has been observed from higher levels yesterday.

Going by the pattern analysis, the Markets remaining in the overall formation that we have been discussing in previous editions. Further, there has been additional formation of a trend line within the original formation and the Markets may find pattern resistance there as well. Given this, there are fewer chances that the Markets may see a run-away rise without showing any consolidation at these levels. If it happens, then the sustainability would be under question.

Overall, the Markets are likely to remain in consolidation mode and show some jerks on both side and the session may remain ingrained with some moderate amount of volatility. Sectoral and stock specific out performance would continue. Given this reading, cautious outlook is advised for today. 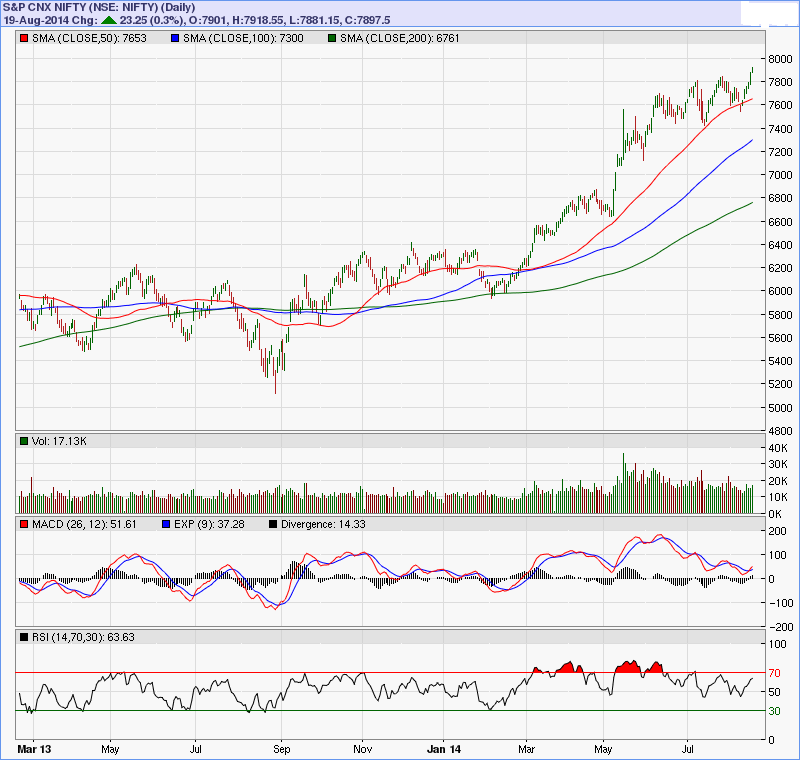 After relentless up move of nearly 275+ points on the NIFTY, the Markets are expected to take some breather today. Expect the Markets to open on a quiet and mildly negative note and look for directions. The Markets have tested the upper trend line of the broadening formation and it is expected to consolidate around these levels, at least technically speaking. The intraday trajectory and the volumes at higher levels would continue to throw important cues for the coming sessions.

The RSI—Relative Strength Index on the Daily Chart is 63.63 and it does not show any failure swings. However, the NIFTY has formed a fresh 14-period high whereas the RSI has not yet and this is bearish divergence. The Daily MACD continues to trade above its signal line and is bullish.

On the derivative front, the NIFTY August futures have added yet another over 1.93 lakh shares or 1.29% in Open Interest. This implies continuation of building of fresh long positions in the yesterday’s session.

Checking on the pattern analysis, the Markets have pulled back nearly 30-odd points after nearly approaching its 50-DMA on the Close charts. While it did so, it was in a Broadening Formation and even today it continues to remain in this formation. However, given the current levels it has tested its upper trend line of such formation and normally, technically speaking, the any Market would either correct or consolidate around these levels. Usually, depending upon the participation, i.e. volumes the Markets would either consolidate or correct or at least briefly halt its advance.

Given the above reading, the strategy for the Markets should be more or less on similar lines like yesterday. Purchases may be made, though selectively but such long positions and profits should be very vigilantly protected at higher levels.  If not today, then in coming sessions, there is all likelihood that one gets trapped in the distribution selling that happens at higher levels. Overall optimistic approach but with very high degree of caution is advised for today. 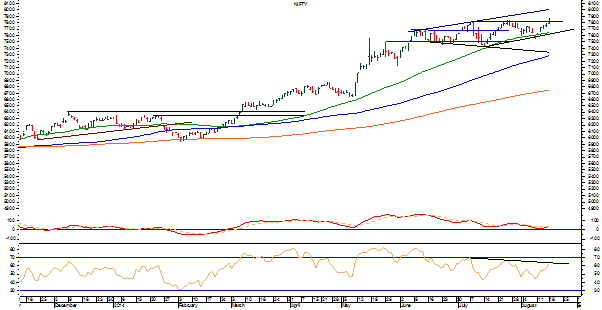 Technically speaking, since the Markets have ended at the high point of the day, they are set to open again on a positive note and trade with gains at least in the initial trade. The external factors continue to aid to this sentiment and we can see a positive opening with the Markets trading with modest gains.  However, with each rise now the Markets are showing increasing probability of some impending consolidation in the immediate short term.

Though the Markets would open and trade in uncharted territory, the possible resistance levels could be 7905 and 7930. The supports exist at 7815 and 7770 levels.

The RSI—Relative Strength Index on the Daily Chart is 62.5121 and it has reached its highest value in last 14-days which is bullish. It does not show any bullish or bearish divergence. The Daily MACD has reported a positive crossover and it now trades above its signal line.

On the derivative front, the NIFTY August futures have added over 6.41 lakh shares or 4.45% in Open Interest. This reading is generally bullish but the NIFTY PCR now stands at 1.07 from 0.97 yesterday.

Going by the pattern analysis, as mentioned in our yesterday’s edition of Daily Market Trend Guide, the Markets have attempted to breakout from a ascending triangle while still continuing to remain within the overall broad formation that we have been mentioning in our previous couple of editions. Though the Markets continue to rise, it would still continue to remain in overall broadening formation and therefore we can very firmly say that these advances are creating distribution in the immediate short term.

Given the above reading, we would continue to advise traders / investors to remain extremely vigilant at higher levels and protect profits. Fresh purchases may be made but on very selective basis and with trailed stop losses. At any given point of time, the possibility of a consolidation of profit taking from higher levels cannot be ruled out. Positive caution is advised for today.