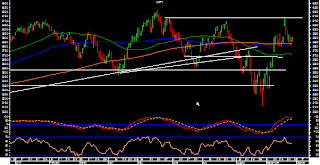 As evident from the Charts, the Markets have been severely consolidating and therefore, today as well, like past two days, the analysis remains more or less on similar lines. Expect a flat opening in the Markets and the way it has been doing, it will need to keep its head above the levels of 200-DMA which is 5841.50 in order to avoid weakness. The intraday trajectory and the behaviour of Markets vis-à-vis this level would continue to remain crucially important.

The RSI—Relative Strength Index on the Daily Chart is 55.9687 and it is neutral as it shows no bullish or bearish divergence or any kind of failure swings. The Daily MACD remains bullish as it continue to trade above its signal line but as mentioned yesterday, it is moving towards reporting a negative crossover. On the Candles, A Spinning Top has occurred. If this happens during a up move, it suggests possibility of the momentum slowing down and indicates a potential mild correction.

On the derivative front, average rollovers were seen in Market wide and NIFTY segments. Minor open interest was reduced while the Markets remained absolutely flat yesterday.

Given the pattern analysis and the F&O data, as mentioned earlier, the Markets have remained severely in consolidation phase and therefore the analysis too remains in similar lines. The Markets have managed to keep its head above the levels of 200-DMA and it will be important that it trades above  200-DMA in order to avoid any weakness creeping in. Any breach below this level will mean further weakness for the Markets.

All and all, given this, since the Markets have not breached any significant levels as of now, shorts should be strictly avoided and fresh purchases maybe made on a very selective basis. Sectoral out performance would continue. Since the directional consensus has been missing it is advised to take aggressive positions on either side and keep protecting profits wherever possible. Overall, cautious outlook is continued for today. 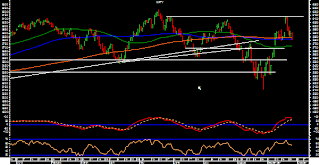 Today, we enter the expiry day of the current September derivative series and the session is bound to remain dominated with rollover centric activities. The analysis for today remains again on similar ground as the Markets continue to consolidate. We can expect a flat to modestly negative opening today and the behaviour of the Markets vis-à-vis its 200 and 100DMA would be crucial.  The intraday trajectory would continue to remain critically important.

The RSI—Relative Strength Index on the Daily Chart is 55.5916 and it remains neutral as it shows no bullish or bearish divergence or any kind of failure swing. The Daily MACD remains bullish as it trades above its signal line, but is moving towards giving a negative crossover in coming days.

On the derivative front, reduction is seen in total Open Interest in NIFTY and Stock futures alike. Signifies that the spurt that we saw yesterday was totally rollover centric and was on account of short covering in the Markets.

Given the pattern analysis and the F&O data, we are very much likely to see the Markets remain in consolidation phase for some time. This phase will keep the Markets in a  broad trading range with little weaker bias. As mentioned earlier, any dip below the 200 or 100DMA shall make the Markets weaker and the  levels of 6130 have become an immediate top for the Markets.

All and all, today we can fairly expect a range bound trade today. Along with being range bound, it is likely to remain volatile as well given the expiry day today. We continue to advise to remain highly selective in making fresh purchases. Both, short positions as well as any type of aggressive positions should be avoided as the Markets are yet to determine directional certainty. Overall,  continuance of cautious outlook is advised for today.

MARKET TREND FOR TODAY
The Markets have ended absolutely flat yesterday with taking support near its 200-DMA in the opening minutes of the trade. Today's analysis remain more or less similar again as the Markets are likely to open on a flat note and look for directions. The Markets will have to maintain levels above its 200-DMA in order to continue with its consolidation. Any breach below this will make the Markets weaker.

The RSI--Relative Strength Index on the Daily Chart is 56.5882 and it is neutral as it shows no bullish or bearish divergence or any failure swings. The Daily MACD continues to trade above its signal line.

On the derivative front, no major shedding / addition of open interest was seen. The rollovers continued as we a re in the expiry week.

Going by the pattern analysis, the Markets are likely to consolidate with a downward bias. The Markets will have to maintain levels above its 200-DMA and any breach of this level would make the Markets weaker. The levels of 6130 have become a immediate top for the Markets and no sustainable up move would occur until the Markets moves past this level.

All and all, Markets are likely to remain in a consolidation phase and would remain in a trading range. As mentioned earlier, it will have to maintain levels above 200-DMA and any breach below this will make it weaker. We are into penultimate day of expiry and the session would remain dominated with rollover centric activities. As advised yesterday, while avoiding aggressive positions, selective buying may be done. Shorts should be avoided and cautious outlook on the Markets may be maintained.
Milan Vaishnav,
Consulting Technical Analyst,
www.MyMoneyPlant.co.in
http://milan-vaishnav.blogspot.com
+91-98250-16331
milanvaishnav@mymoneyplant.co.in
milanvaishnav@yahoo.com
Posted by MyMoneyPlant.co.in at 9/25/2013 08:47:00 AM No comments: 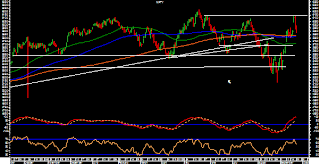 Today as well, the Markets are expected to open on a modestly lower note and continue with its correction, at least in the initial trade. However, 200-DMA, which is 5842 is likely to act as support. It would be important to see the behaviour of the Markets vis-à-vis this level. If this level is breached, some more weakness might creep in.

The RSI—Relative Strength Index on the Daily Chart is 56.4831 and it shows no bullish or bearish divergence. It does not show any failure swings as well and it is therefore, neutral. The Daily MACD still continues to trade above its signal line.

On the derivative front, total NIFTY futures have reported shedding of over 3.25% in total Open Interest. This is also reflected in stock futures data as this has been result of the bleeding in the rate sensitive stocks like Realty, Auto and Banks.

All and all, we continue with our view that the Markets would continue to see the corrective activities and the behaviour of the Markets vis-à-vis the levels of 200-DMA would be crucial. Also, this being the rollover week, the session would also remain dominated with rollover activities and is equally likely to keep the Markets volatile. Fresh positions should be taken very selectively. However shorts should be avoided as the Markets remain without any directional concensus.

MARKET REPORT                                                                               September 23, 2013
The Markets needed a reason to correct and RBI provided an excellent platform to do so ! The Markets on Friday opened on a modestly positive note and traded in a capped range in the morning on expected lines by the time the RBI came up with its  Credit Policy. The Markets saw a temporary spurt as it traded positive and gave its intraday high of 6130.95. The RBI Credit Policy announcements wherein it hiked the rate by 25bps just did not go well which the Markets which was expecting either no change or a positive surprise. The Markets gave out a very volatile and severe reaction to this as it saw a parabolic straight line fall of nearly 198 points as it touched its day’s low of 5932.85. In the last hour of the trade, it did saw some minor short covering from lower lowers and it ended the day at 6012.10, still posting a loss of 103.45 points or 1.69% while forming a lower top and sharply lower bottom on the Daily High Low Charts. 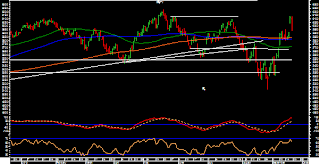 For today, the levels of 6130 has become an immediate resistance and top for the Markets.  Any sustainable up move shall occur only after the Markets move past this level. The supports exist at 5910 and 5842 levels.

The RSI—Relative Strength Index on the Daily Chart is 62.8938 and it is neutral as it shows no bullish or bearish divergences or any kind of failure swing. The Daily MACD remain  bullish as it trades above the signal line.

On the derivative front, the stand alone data for the Month of September shall not give any conclusive directional indication. However, the total open interest for NIFTY futures have been shed which very clearly indicates the unwinding of long positions from higher levels.

Given the above reading, the technical indicators certainly suggest the continuation of corrective activity in the Markets. This also gets support from the F&O data which has consistently shown the shedding of Open Interest. Given all this reading, it is primarily certain that the Markets will have a restricted up move from these levels and the levels of 6130 has now become a immediate top for the Markets and any up move that has to occur will occur only after the Markets move past these levels.

All and all, the Markets shall see a negative opening and the correction would continue. It is important to see if the correction continues or again, the Markets sees a range bound consolidation. In either case, some weakness along with volatility shall persist. Any fresh positions that has to be taken should be taken very selectively. However, selective sectoral out performance shall continue. While avoiding aggressive positions, cautious outlook should be maintained.