MARKET OUTLOOK FOR FRIDAY, NOV 10, 2017
After two sessions of corrective downsides, the benchmark NIFTY50 arrested its down movement as it ended the day flat with nominal gains of 5.80 points or 0.06%. The Markets had opened on a firm note but did not sustain its pullback on much expected lines. However, after paring its early morning gains and testing the intraday lows, the Index recovered  nearly 50-odd points at Close levels. Going into traded on Friday, we expect this attempt to pullback to continue. A modestly positive opening is expected and in all chances, the Markets may continue to give some meaningful technical pullback. However, the sustainability of the expected pullback will continue to remain a concern. 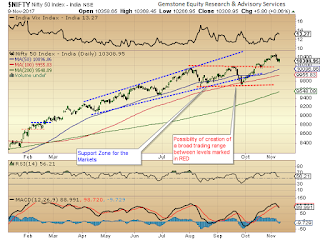 The Relative Strength Index – RSI on the Daily Chart is 56.2095 and it shows no divergence against the price and remains neutral. The Daily MACD stays bearish while trading below its signal line. No significant formations were seen on Candles.

The pattern analysis continues to show the Index taking a breather after breaking out from 10200 levels. It is evident that it will continue to take a breather and consolidate for some more time before it makes a decisive move upwards.

All in all, we will still see the Markets taking a breather trying to consolidate at current levels. Though there is no structural damage on the Charts, the meaningful up move may still continue to elude us for some time while the Markets continue to consolidate with upward bias. The immediate short term support exist at 20-DMA and we will continue to see the markets in general trying to remain resilient to any major corrective move. Session with continue to remain dominated with stock specific activities.

MARKET OUTLOOK FOR THURSDAY, NOV 09, 2017
The Session on Wednesday remained under modest corrective pressure as the benchmark NIFTY50 ended the day losing 47 points or 0.45%. As mentioned in our yesterday’s note, the levels of 10390 acted as a resistance as the Index marked the high of 10384.25. Going into trade on Thursday, we expect the markets to see a modestly positive opening. Markets may once again attempt for a pullback but it would be important to see if such attempted pullback sustains as we move ahead in the session.

The patterns analysis shows that while the NIFTY has successfully broken out on the upside from 10199 levels, it is now evidently taking a breather and is expected to consolidate for some more time.

All in all, there are high chances that the NIFTY once again attempts a pullback but however, the sustainability of such attempted pullback needs to be watched. The downsides, if any, are expected to remain very much limited. There is no structural damage on the charts and the fact that overall volumes have remained much lower than average establishes that the declines that we saw are nothing but a classical technical correction. We recommend to continue to remain highly stock specific as we approach the session on Thursday while continuing to keep exposures at moderate levels

MARKET OUTLOOK FOR WEDNESDAY, NOV 08, 2017
In our previous note, we had mentioned about fractured Market Breadth that the Markets had for last couple of sessions. On Tuesday, the benchmark NIFTY50 suffered a corrective crack as it ended with a net loss of 101.65 points or 0.97%. Going into trade on Wednesday, we can expect a mild technical pullback. While remaining highly stock specific, the Index may see some mild improvement in market breadth as well. However, if we see a mild technical pullback, it would be important to see if it sustains and arrests its downside moves. We cannot expect any significant up move unless we see the breadth of the Markets improving. 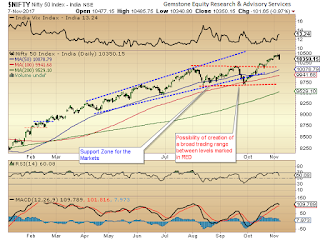 The Relative Strength Index – RSI on the Daily Chart is 60.0796 and it has just move below from the overbought territory. It shows no divergences otherwise. The Daily MACD is still bullish as it trades above its signal line. An Engulfing Bearish line has occurred. It has occurred after an up move, it has established the credibility of the resistance area of 10490 levels. This means that for any fresh sustainable up move to occur, NIFTY will have to move past the levels of 10490.

All in all, we can go into the trade tomorrow expecting a mild technical pullback. As mentioned above, if at all if we have such expected technical pullback, key would be to see if it sustains. As it happened in the previous session, stock specific out-performances would continue. We continue to reiterate maintaining highly cautious view on the Markets while keeping overall  exposures at modest levels.

MARKET OUTLOOK FOR TUESDAY, NOV 07, 2017
Volatility crept in the Monday’s session as the NIFTY swung 60-odd points on either side before ending completely flat with negligible gain of 0.70 points or 0.01%. Though the benchmark NIFTY 50 came off swiftly from the opening lows, it came off from the highs as well before ending flat. The Markets not declining is certainly a show of strength but the overbought nature of the Markets coupled with very less intraday trading bands is certainly to keep market participants on toes. We expect such fierce consolidation to continue before Markets attempts a fresh up move. 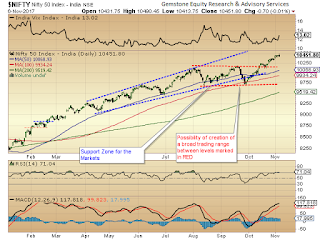 The Relative Strength Index –RSI on the Daily Chart is 71.0366 and it remains neutral showing no divergence against the price. The Daily MACD is bullish while it trades above its signal line. No significant formations were seen on candles.

The pattern analysis clearly shows the NIFTY attempting to briefly consolidate and attempt a fresh up move. However, the overbought nature of the Markets may keep the Index under consolidation for some more time.

All and all, even after such up move and the Markets showing no signs of decline is certainly a show of underlying strength. However, it also needs to be noted that couple of previous up moves have come with highly fractured market breadth which remains a important technical worry for the Markets. There are great chances that the Markets continue to remain volatile and remain vulnerable to short term corrective spikes. Also, it is highly likely to remain stock specific in nature. Cautious view is advised for today.

MARKET OUTLOOK FOR MONDAY, NOV 06, 2017
In a slightly volatile session on Friday, the benchmark NIFTY50 recouped all of its initial losses to end the day with modest gain of 28.70 points or 0.28%. While taking a broad view of the technical structure of NIFTY, we continue to keep our analysis on similar lines for Monday’s trade. The Markets are overbought, but strong. In all likelihood, NIFTY is likely to keep pushing itself for minor marginal highs but at the same will also continue to remain vulnerable for consolidation at higher levels. 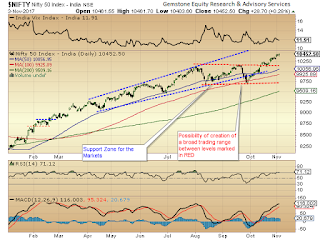 The Relative Strength Index – RSI on the Daily Chart is 71.1196. It trades slightly in overbought territory. RSI also continues to show Bearish Divergence as RSI has not made a fresh 14-period high while the NIFTY did so. The Daily MACD remains bullish while trading above its signal line. On the Candles, a candle with a long lower shadow occurred. This is much similar to a Hanging Man formation and can potentially disrupt an up move. This needs confirmation on the following day.

The pattern analysis shows that the NIFTY, which formed a broad rectangle formation in the 9685-10200 range is attempting to reach its measuring implication after breaking out from this formation. It is midway and might face some consolidation at current levels.

Overall, significant addition in Open Interest with a modest rise shows the underlying strength in the Markets. Also, with shorts being added with each minor downside in the Markets also provide enough cushion in event of any consolidation of minor corrective downsides. All in all, we will continue to see the NIFTY pushing itself for marginal highs and we recommend chasing momentum if that happens. However, caution levels will have to be kept at elevated levels as overall structure of the technical charts keep Markets vulnerable to some consolidation and volatile movements at higher levels.