The Markets had a utterly volatile session yesterday with the NIFTY moving in either direction to ultimately end the day with modest losses while testing its major Double Bottom Support and continuing to remain in OVERSOLD zone. The Markets opened on a negative note and soon recorded it’s day’s low of5486.85 in the morning trade. After forming this bottom, the Markets attempted to reverse its trade as recovered all of its morning losses by afternoon, but only to pare that recovery again. However, the Markets saw another bout of recovery. It went to trade in the positive territory briefly while forming a intraday high of 5561.45. Again, that recovery too was not sustained as the Markets gave up those gains again, dipped into the negative and ended the day at 5519.10, posting a modest loss of 23.15 points or 0.42% while continuing to form a lower top and lower bottom on the Daily High Low charts. 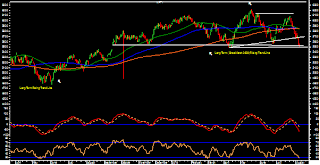 Today’s analysis once again remains more or less on similar grounds that of yesterday. The levels of 5490-5500 levels are the Double Bottom Support Levels and the behaviour of the Markets vis-à-vis those levels would be critically important. The chances of the Markets holding on to those levels are HIGH as they trade in OVERSOLD zone. Further, volatility may remain as today’s is the last working day of the week, tomorrow being a trading holiday.

The RSI—Relative Strength Index on the Daily Chart is 28.1748 and it has reached its lowest value in last 14-days. However, it continues to trade in “Oversold” territory and also, it does no show any bullish or bearish divergences. The Daily MACD continues to trade below its signal line.

On the derivative front, the NIFTY August futures have shed over 11.31 lakh shares or 6.77% in Open Interest. The NIFTY PCR stands at 0.95.

The reading of the Markets is fairly clear. The Markets remains in oversold territory and on its major double bottom support. As mentioned number of times in our previous editions, over 90% of the  Index Components of NIFTY, BankNIFTY and CNX MIDCAP also continue to trade oversold. There continue to exist large short positions in the Markets and the Markets are likely to take support at these levels.

Overall, with the reading of the Markets being oversold along with majority of its components, there are high chances of a long overdue and imminent pullback, unless the Markets continue to defy the technicals. However, it is advised to strictly remain away from creating short positions and also equally advised to not create aggressive long positions. However, very selective stock picking may be done. Overall, continuance of cautious outlook is advised with hope of a long overdue pullback happening any time. 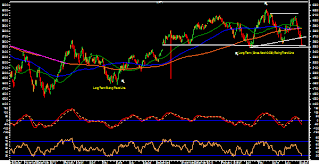 Today the Markets are expected to open on a positive note and give some technical pullback rally. Today, we have very little to analyse except that the Markets are trading near their Double Bottom Support and if it behaves technically, should take support at these levels. Speaking purely on technical grounds a pullback is now very much overdue and imminent. However, in last couple of sessions, the Markets have been squarely defying the technicals especially with over 90% of its components in oversold levels.

On the derivative front, the Markets have added massive 14.55 lakh shares or over 9.54% in Open Interest. This figures are very important as for the fist time in last 7-10 sessions that the Markets have shows addition in the Open Interest figures. This also shows that huge number of shorts have been created in the system yesterday.

It is once again important to note that the FIIs have remained net buyers, though marginally. The majority of the sell figures have come in from the DIIs. On the contrary, in last 2-3 sessions, some amounts of shorts too have been piled up by the FIIs in the derivative segment, especially in the Indices. With the NIFTY too now trading oversold along with BANKNIFTY and both of these indices components, it would be TOTAL DEFIANCE by the Markets if it does not give a sustained pullback or a relief rally.

All and all, the advices stands same as that of yesterday. The Markets have no technical reason to go further down. Shorts should be avoided as short trap can occur at lower levels. If liquidity permits fresh purchases may be made very selectively. Otherwise, existing positions should be maintained as all technical inputs points towards a very long overdue and imminent pullback. 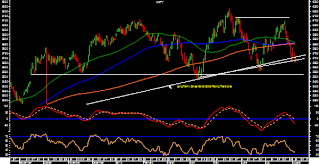 The lead indicators continue to remain neutral. The RSI—Relative Strength Index on the Daily Chart is 36.1294 and it is neutral as it shows no bullish or bearish divergence or any kind of failure swings. The Daily MACD continues to trade below it’s signal line.

On the derivative front, the NIFTY August futures shed little over 2.05 lakh or 1.33% in Open Interest. This is not a major shedding of open interest, but this still, needs to be replaced with longs if the Markets have to make a sustainable up move.

Having said this, again, the reading remains similar to that of our yesterday’s edition of Daily Market Trend Guide. Over 90% of the components of NIFTY, BankNIFTY, CNX MIDCAP remain nearly OVERSOLD and therefore any further dip may increase the chances of short covering if not buying from lower levels.

All and all, given this reading it is VERY important to note that with any further dip in the Markets, a pullback, somewhat sharp is now long over due and quite imminent. However, we would advice to maintain liquidity and status quo on the positions rather than buying as the directional trend still remains without any consensus. Shorts may be strictly avoided. Overall, the chances of the Markets taking support after a negative opening are high and therefore cautious outlook with little optimism is advised for today. 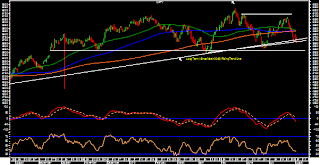 On the derivative front, NIFTY August futures have continued to shed over 9.68 lakh shares or 5.90% in Open Interest. This is certainly a negative reading. This show clear unwinding of positions. It is critically important to see that this gets replaced with fresh buying and long positions. The NIFTY PCR stands at 0.99 as against 1.01.

There are important things to note here. Though derivative figures show unwinding in form of decreased open positions, we have categorically mentioned in our last edition of Daily Market Trend Guide that over 90% of components of NIFTY, Bank NIFTY, CNX MIDCAP, etc., stand OVERSOLD or nearly oversold. Secondly, the Global Markets have been stable and have outperformed the Indian Markets. Further to this, with the Markets holding on to the pattern support and with decently positive opening likely today, we are likely to see relief rally, at least in the initial trade.

As mentioned, a pullback is now long overdue and imminent. Today’s session remain critically important and holding on and capitalizing on the opening gains would be of utmost importance. We continue to advice to strictly refrain from shorts as there is high likelihood of the Markets taking support at current levels. Aggressive buys too should be avoided to maintain adequate liquidity until directional trend gets clear. Overall, though cautious, but positive outlook is advised for today.