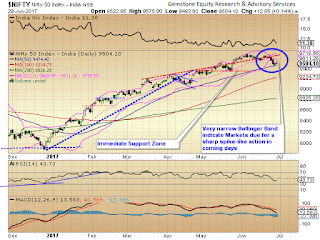 Very much on analyzed line, volatility ruled the roost on Thursday and the session remained heavily dominated with rollovers. The benchmark NIFTY50 came off nearly 80-odd point from the high point of the day, oscillated in a range and finally ended up with modest gain of 12.85 points or 0.14%. We expect a tepid start to the Markets and going ahead the 50-DMA levels which stand at 9474 today will continue to remain an important level to watch for.

The Relative Strength Index – RSI on the Daily Chart is 43.7326 and it remains neutral showing no divergence against the price. The Daily MACD remains bearish while trading above its signal line. No significant formations were observed on Candles.

The Pattern analysis clearly shows the NIFTY breaching the upward rising trend line drawn from 9200 levels. Having breached this it is likely to act as resistance going upwards. Also, the Markets have been able to hang on to the levels of 50-DMA and going ahead, this level will continue to act as important pattern support.

All and all, though the Markets have stayed above 50-DMA, it is not completely out of the woods. Caution would still be required until it ends near the high point of the day building higher bottoms. Until that happens, even profit at every stage will be required to be guarded vigilantly. 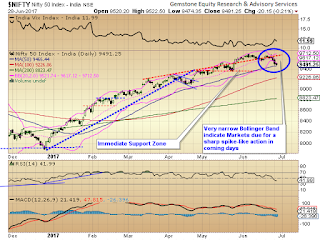 Corrective undertone persisted as the Indian Equities continued to post modest correction as the benchmark NIFTY50 ended the day with modest loss of 20.15 points or 0.21%. We enter the expiry day of the current derivative series and see Markets opening on a flat note. However, the expiry day is very much likely to bring volatility in to the session. The Markets have taken support near the 50-DMA levels so for. On Thursday as well, this 50-DMA levels which stand at 9466 will continue to remain important levels to watch out for.

The Thursday’s session will see the levels of 9530 and 9565 acting as immediate resistance levels for the Markets. The supports come in at 9460 and 9410 zones.

The Relative Strength Index – RSI on the Daily Chart is 41.98.93 and it has marked a fresh 14-period low which is Bearish. It does not sport any divergence against the price. The Daily MACD continues to remain bearish while trading below its signal line.

The pattern analysis show the Markets remaining overall in rising trend but certainly markets the zones of 9700-9710 as its intermediate top for the Markets. The levels of 50-DMA will be important to watch out for under these circumstances.

All and all, we can certainly expect some volatility in the session on Thursday owing largely due to the rollovers. We are likely to clearly see sectors being rotated not just tomorrow but for some more days to come. We are likely to see select pockets of stock specific out-performance. Given the fact that the markets are attempting to  find some base near 50-DMA, any breach below this level will infuse some more short term weakness in the Markets. 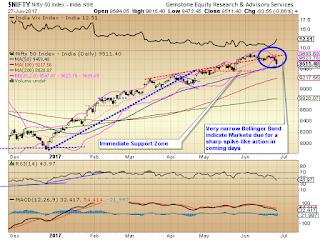 After losing nearly 142-odd points from the high point of the day, the benchmark NIFTY50 on Tuesday recovered from lows of the day as well to end the day with net loss of 63.55 points or 0.66%. Corrective activities continued in the Markets. On Wednesday, as we enter the penultimate day of the expiry of the current derivative series, we expect a tepid start to the Markets. Though corrective undertone will continue to persist, we will also see some attempts by Markets to stabilize and the levels of 50-DMA will remain important to watch for.

The Relative Strength Index – RSI on the Daily Chart is 43.9731 and it has reached its lowest value in last 14-days which is bearish. The Daily MACD stays bearish while trading below its signal line.  No significant formations were observed on Candles.

The pattern analysis clearly shows the NIFTY breaching the support line on the downside. This support line is the trend line drawn from 9200 levels. This has established the zones of 9700-9710 as the intermediate top for the Markets.

All and all, the levels of 50-DMA which is 9459 will remain extremely critical levels to watch out for. The Markets are expected to see good support coming in this zones and it is very much expected that the Markets will attempt to find a base around these levels. However, given the expiry week, some volatility going ahead cannot be ruled out. Preservation of cash along with a very cautious view on the Markets is advised. 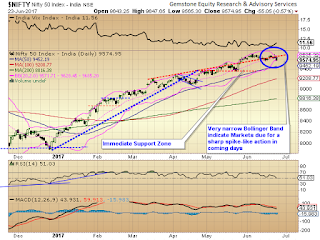 The session on Friday remained disappointing as the Markets continued to correct much on expected lines. The NIFTY50 ended the day with a net loss of 55.05 points or 0.57%. Markets will open on trade on Tuesday after a extended weekend following a public holiday. We expect a modestly positive start to the Markets. Global set up has remained positive and there can be likely positive adjustments in the Indian Equities as well. However, as of now, the zones of 9700-9725 have firmly established themselves as a temporary top to the Markets.

The Relative Strength Index – RSI on the Daily Chart is 51.0343. It has marked a fresh 14-period low and this is bearish. The Daily MACD stays bearish as it continues to trade below its signal line. A  big black candle that occurred reinforced the credibility of the resistance area at 9625-9650 zones.

The pattern analysis show the NIFTY has breached its short term 20-DMA and it also now trade below its rising trend line which as acting as support as of now. In event of any pullback, this area is likely to act as resistance.

Further to this, beginning Tuesday, we enter a shortened expiry week we will see actions remaining heavily dominated with rollover centric activities. However, we expected some stability in the Markets to return but very narrow Bollinger bands still keep Markets exposed to some sharp movement. Volatility is likely to persist and we recommend preserving cash and adopting cautious outlook on the Markets. 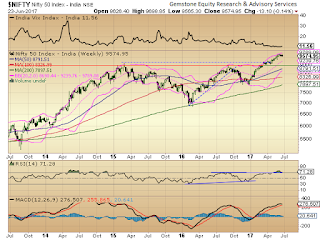 Despite remaining overbought, the benchmark NIFTY50 put up a resilient performance as the NIFTY ended flat on week-on-week basis ending just 13.10 points or 0.14%. Some minor correction was seen during the week but Weekly Charts still remain overbought. We have a extended week-end, and therefore a shortened expiry week ahead. Overall, the Markets are likely to remain uneventful and are likely to trade with a corrective bias. We will also see some volatility creeping in as well overcoming days.

The Relative Strength Index – RSI on the Weekly Chart is 71.2819. Though they remain neutral showing no divergence against the price, they still continue to trade moderately overbought. The Weekly MACD is still bullish trading above its signal line. However, it is moving towards reporting negative crossover.

The pattern analysis shows no signs of any significant downtrend of formation of any immediate top on Weekly Charts. The breakout achieved from 8900-8950 levels continue to remain valid though some signs of short term tiredness are seen.

Overall, the oscillators on the Daily Charts have significantly corrected but they still remain moderately overbought on Weekly Charts. This may cause the Markets to remain under corrective action for some more time. In the coming week, adopting stock specific approach with high degree of caution along with preservation of cash is advised. 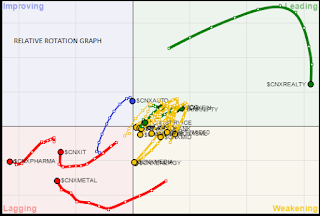 A study of Relative Rotation Graphs – RRG shows that all major broad sectors such as CNX100, 200, 500, NIFTYJR, PSUBANKS, ENERGY, INFRA, MEDIA, CNXMID, etc are distinctly weakening. REALTY is struggling to relatively outperform the Markets but is losing momentum as well. In the coming week, we will see IT and METAL stocks continuing to consolidate their performance may attempt to strengthen themselves. Relative out-performance will be seen from select pocket of AUTO, Financial Services and FMCG stocks and they are expected to outperform the benchmark.