The RSI—Relative Strength Index on the Daily Charts is 49.2633 and it remains neutral as it shows no bullish or bearish divergences or any failure swings. The Daily MACD continues to remain bearish as it trades below its signal line.

On the derivative front, rollovers remain in line wit the 3-month average in NIFTY and stocks alike. The NIFTY August series added over 39.87 lakh shares or 31.60% in Open Interest. The NIFTY PCR for August series stands at 0.85.

Coming to pattern analysis, the Markets have breached its lower support trend line of the channel that it had formed after making lows at 8000-levels. Having said this, though the Markets have managed to hang on to all of its DMAs  at Close levels, this very same trend line which is breached on the downside is likely to act as resistance going ahead. Though the Markets may continue with its pullback, this pattern is likely to pose resistance around 8500-8550 levels. It would be imperative for the Markets to move past these levels otherwise  we will again see the interruption in the uptrend around these levels.

Overall, the Markets may open with mild gains and continue it uptrend at least in the initial session and we will also continue to see selective stock and sector out performance. The levels of 8400 would be an important support and its breach can see the Markets going to 8340 levels. The behaviour of the Markets vis-à-vis the levels of 8400-levels would be crucial to watch out for. Select purchases may be made with high vigilance over protection of profits at higher levels.


The Markets had a day of positive consolidation amidst lower volumes as it ended the day with modest gains after a range bound session. The Markets saw a better than expected positive opening but spent the first half of the session in a very narrow 20-odd points range heading nowhere. It was in the second half that the Markets saw some more strength coming in as it surged and formed its day’s high of 8381.50. The Markets soon pared this gain and traded in a directionless trajectory with modest gains. The last hour of the trade once again saw some strength and the Markets finally ended the day at 8375.05, posting a modest gain of 38.05 points or 0.46% while forming a lower top but higher bottom on the Daily Bar Charts. Markets continue to pose itself at a critical juncture. Expect the Markets to open on a modestly positive note and look for directions. Most likely, the Markets will continue with their recovery initiated in the last hour of the trade yesterday. The positive sentiment would be aided by slightly improved technical factors and also good global cues which are aided by the Fed Reserve keeping the rates expectedly unchanged.


The RSI—Relative Strength Index on the Daily Chart is 46.1240 and it remains neutral as it shows no bullish or bearish divergence or any failure swings. The Daily MACD remains bearish as it trades below its signal line.


Going by pattern analysis, the Markets have managed to keep its head above its 50-DMA at Close levels and today as well, it is expected to continue to do so. Further to this, on the way up, it is likely to encounter resistance at 100 and 200-DMA levels which are almost converging. It would be out of immediate danger if it manages to move past these two levels. Until this happens, it would continue to consolidate with the levels of 100 and 200DMA acting as immediate resistance the level of 50-DMA acting as immediate support. Any breach, as mentioned in our yesterday’s edition will induce some short term weakness.


All and all, the Markets are likely to remain dominated with rollover activities as we enter the expiry day of the current series. This will not only keep the Markets range bound but also leave it vulnerable to some spikes on either side as well with some amount of volatility ingrained in it. It is advised to keep the exposure limited and resort to purchases on highly selective basis. Cautious optimism is advised for today. 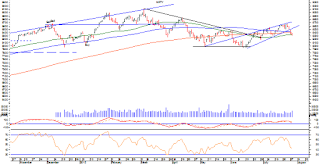 MARKET TREND FOR WEDNESDAY, JULY 29, 2015
The Markets pose themselves at a critical juncture today and are expected to open on a flat to mildly positive note. The Markets trades  below both of its 100 & 200 DMA and it is now expected to take support at its 50-DMA which is 8342 today. This would be a very important support levels to watch out for and any breach at Close levels will see some weakness in the Markets in the immediate short term.

The RSI—Relative Strength Index on the Daily Chart is 43.4810 and it has reached its lowest value in last 14-days which is bearish. RSI has set a fresh 14-day low whereas NIFTY has not yet do so and this is Bearish Divergence. The Daily MACD remains bearish as it trades below its signal line.

Coming to pattern analysis, the Markets have fallen below and breached the rising channel that it was trading in. It is expected to take support at its 50-DMA at Close levels in order to avoid any weakness. It has done so yesterday and it is expected to do so today as well. It is very important to note that the behaviour of the Markets vis-à-vis the levels of 50-DMA would be critically important to watch out for and any breach of this level will induce temporary short term weakness in the Markets.

All and all, having said this, apart from watching the 50-DMA levels at Close, the Markets will also remain dominated with rollover centric activities as we enter the penultimate day of expiry of current series. We continue to reiterate on our advice of refraining from any fresh exposure and maintain liquidity in the immediate short term with cautious outlook for the day. 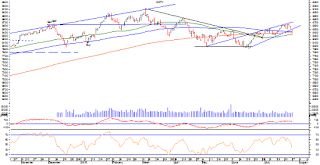 MARKET TREND FOR TUESDAY, JULY 28, 2015
Expect the Markets to open today on a stable note and look for directions. There are fair chances that the Markets arrest its downsides, stabilize and even attempt a pullback. However, the Markets fell out yesterday from its channel and while pulling back the trend line support which it  breached might act as short term resistance for the Markets. Overall, the Markets have slightly placed itself in little precarious position.

The RSI—Relative Strength Index on the Daily Chart is 44.7672 and it has reached its lowest value in last 14-days which is bearish. Further, RSI has set a fresh 14-period low but NIFTY has not yet and this is bearish divergence. The Daily MACD has reported a negative crossover and is now bearish as it trades below its signal line.

Coming to pattern analysis, the Markets have fallen out of the small rising channel that it had formed. Because of this, the trend line support it breached yesterday will not act as its immediate short term resistance. Further, the Markets also breached its 100-DMA and 200-DMA and have closed below it. However, it remains within its filter and there are chances that it still continues to take support around these levels.

Overall, though the Markets are expected to open on a quiet note and expected to take some stability, it is likely to continue to remain volatile as it will struggle with the all important support levels at Close. Further, with the rollovers, it will also keep the Markets dominated with rollovers activities. Though some range bound movement and intermittent volatility may be seen, overall, any dip should be utilized to pick selective stocks. Neutral to cautiously positive outlook is advised for today.