The Markets traded precisely on analyzed lines yesterday. In absence of a clear breakout, the Markets continued to resist to its intermittent previous top. While it corrected sharply yesterday, it tested its 200-DMA as well. Today, we can expect the Markets to open on a weaker note and look for directions. Today’s possible negative opening will see the Markets opening below its 200-DMA which is 7853 and this level will continue to pose resistance to the Markets in days to come. The intraday trajectory that the Markets forms post opening will be crucial to watch out for. 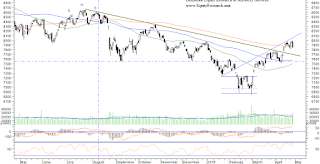 The RSI—Relative Strength Index on the Daily Chart is 57.3267 and it remains neutral as it shows no bullish or bearish divergence or any failure swings. The Daily MACD stays bullish as it trades above its signal line. However, it is moving towards a negative crossover in coming days if the Market conditions do not improve. On Candles, a big black candle has occurred. Since this has occurred near the resistance area, it has added credibility to the resistance.

On the derivative front, rollovers remained well above its 3-Month average. The NIFTY May futures witnessed rollovers of over 74% as against its 3-month average of 67%.

While having a look at pattern analysis, the Markets had formed an intermediate top of 7978 on April 21st. Since then, it tested its 200-DMA twice. Tough it had reported a close very near to this level couple of days back, we had categorically mentioned that the Markets have not yet given a clear break out and this level will hold out as intermediate top until a clear breakout is seen. Yesterday, the Markets corrected once again from these levels and it did so sharply that it straightaway tested its 200-DMA. Today, with possibility of a lower opening once again, the Markets will find itself below the 200-DMA and this level will continue to pose resistance in the days to come. In case the weakness persists, further weakening of the Markets cannot be ruled out.

Overall, the Markets are showing distinct signs of weakness and some more weakness cannot be ruled out if the Markets closes below its 200-DMA. In such case, it is advised to keep purchase very stock specific and defensive and avoid absurd exposures. Overall, continuance of cautious outlook is advised for today.

MARKET TREND FOR THURSDAY, APRIL 28, 2016
The Markets are once again likely to see a modestly start to the day. Today is the expiry day of the current derivative series and we will see the Markets remaining dominated to the rollover activities. The intraday trajectory that the Markets form would be critical to watch out for. The Markets are yet to give a clear breakout and though it has closed at the 2016 closing highs, clean break out is still awaited and in case of any up move, the Markets may test 8030-8040 levels wherein it will meet a pattern resistance. 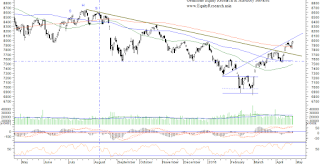 The RSI—Relative Strength Index on the Daily Chart is 68.2016 and it has reached its highest value in last 14-days which is bullish. It does not show any bullish or bearish divergence. The Daily MACD is bullish as it still rules above its signal line.

Coming to pattern analysis, the Markets have not yet given a clear breakout. As mentioned in our yesterday’s edition, the Market took support at its 200-DMA which is 7856 today and have risen from there once again. However, it has not comprehensively breached its prior high of 7978 though it has ended a notch above it yesterday. The Markets are likely to continue to inch upwards and if this happens it may test 8030-8040 levels wherein it will once again meet another pattern resistance. If this does not happen, we will see the Markets consolidating once again with the levels of 200-DMA acting as support once again and we will see the Markets oscillating in 140-odd points range once again. The Markets have shown all the signs of fatigue in recent sessions and it would be important to see how it takes the expiry session.

Overall, it is important to note that the Markets are yet to have a clean break out and also it is showing some signs of fatigue. It certainly remains vulnerable to sharp sell-offs from higher levels and some intermittent profit taking bouts cannot be ruled out. Given the expiry day, volatility too might remain ingrained in the Markets. It is advised to refrain from taking any fresh positions until the directional bias gets clear and maintain cautious outlook for the day.

MARKET TREND FOR WEDNESDAY, APRIL 27, 2016
Speaking purely on technical grounds, the Markets have ended near the high point of the day yesterday and today we can fairly expect the Markets to continue with its up move, at least in the initial trade. Having said this, it still becomes important to note that the Markets have not yet achieved a clear breakout on the Daily Charts and have still chosen to remain below the upper band resistance level of 7978. It would be today, if at all, that the Markets will attempt to achieve a breakout. 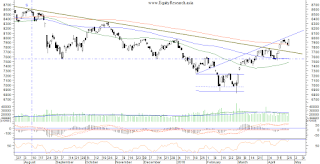 The RSI—Relative Strength Index on the Daily Chart is 67.4561 and it does not show any failure swing. The NIFTY has formed a fresh 14-period high whereas RSI has not yet and this is Bearish Divergence. The Daily MACD still remains bullish as it trades above its signal line. On the Candles, an Bullish Engulfing Pattern has occurred. However, its importance on the upper side is diminished as it has occurred during an uptrend. On the contrary, it may form a potential top once again. However, this requires confirmation today.

Overall, today, we can fairly expect the Markets to attempt a breakout if it moves past 7978 levels. However, if that happens we will see the Markets testing the pattern resistance of 8030 levels. If this does not happen, we will once again continue to see the Markets consolidating once again. It is advised to continue to keep fresh purchases highly stock specific and maintain cautious outlook for the day.

MARKET TREND FOR TUESDAY, APRIL 26, 2016
The Markets remained in corrective more yesterday as it ended the day with modest losses. Today as well, we can fairly expect the Markets to open on a negative note and look for directions. It has slipped below its 200-DMA and even though it still remains within its filter, post expected negative opening, this level of 200-DMA is likely to pose resistance to the Markets. The Markets have formed a immediate top around 7978 levels and until it moves past this level, we will see the Markets remaining under consolidation and in corrective mode. 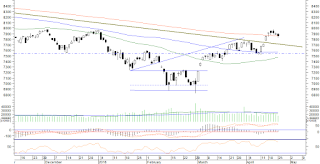 The RSI—Relative Strength Index on the Daily Chart is 62.3426 and it remains neutral as it shows no bullish or bearish divergence or any failure swings. The Daily MACD stays bullish as it trades above its signal line.

Coming to pattern analysis, we had mentioned in one of our previous editions that though the Markets have moved past its 200-DMA, it has not yet given a clear breakout on the Weekly Charts. Having said this, the Markets failed to move past its 200-DMA which stands at 7861 and after making highs of 7978 levels, have retraced to test those levels once again. Looking at this, we can fairly conclude that with the expected negative opening today, this level of 200-DMA will act as immediate resistance for the Markets once again and the Markets will have to see itself above this level in order to resume its up move. It is also important to note that Markets also face similar and more important pattern resistances around these levels. In other words, there will be no significant and sustainable up move until the Markets moves past it’s 200-DMA.

All and all, with the Markets ended a notch below 200-DMA yesterday and with a possible negative opening today, the Markets have become more vulnerable to some more weakness in the immediate short term. With the expiry falling in this week, some amount of volatility will also remain ingrained in the Markets. It is advised to refrain from making any major fresh purchases and maintain cautious outlook for the day.

MARKET TREND FOR MONDAY, APRIL 25, 2016
Quite on expected lines, the Markets have halted its up move in last couple of sessions as it has consolidated in a ranged manner. Having said this, it is once again expected to open on a modestly negative note and while it trades above its 200-DMA which is7863, it will keep the analysis more or less on similar lines like previous week. Also, we enter the expiry week of the current derivative series and this will keep the sessions dominated with rollover centric activities. While the Markets remain above 200-DMA, we will see it continuing to consolidate in a capped range. 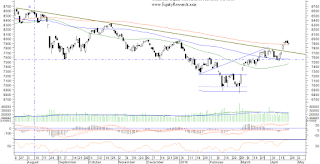 While having a look at pattern analysis, while a hanging man was observed couple of sessions back on the Daily Charts, the up move of the Markets have halted on expected lines. However, so far, the Markets have been able to maintain itself above 200-DMA and this has resulted in a range bound consolidation in the Markets. So long as Markets are able to maintain themselves above 200-DMA, this consolidation will continue. However, any breach below the 200-DMA mark will induce further weakness in the Markets. Even on the  Weekly Charts, there has been no clear breakout and the Markets are showing potential signs of forming a immediate top.

Overall, while having a detailed look at the Daily and Weekly Charts, the Markets are not likely to give a runaway rise until it moves past 7950 levels. Until that happens, we will see it consolidating in a ranged manner. The level of 200-DMA would be important to watch out for and any breach below that will induce further weakness in the Markets. We continue to reiterate our cautious stand on the Markets while using any immediate up moves to protect / book profits at higher levels.