Given this, we continue with our advice to remain moderate on overall exposure. Select purchases may be made on every declines while shorts should be avoided. This would be a truncated week with tomorrow again being a Trading Holiday which can lead to some weakness towards the end of the session if no short covering is seen. Overall, very moderate exposure with cautious approach is advised for today. 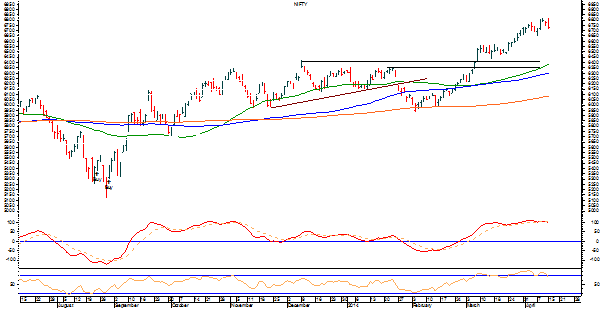 The Markets had all the reasons to cry foul yesterday like rise of CPI, WPI inflation and therefore no hopes for a rate cut in near future. However, the reason was also the technical structure of the Markets wherein the correction was long pending and imminent. Today as well, expect the Markets to open on a flat and quiet note but there are absolutely all chances that the Markets would continue with their corrective activities. IT sector would continue to remain in lime light with TCS coming out with its numbers.

The lead indicators continue show signs of tiredness creeping in the Markets. The RSI—Relative Strength Index on the Daily Chart is 65.9633 and it has just moved out of the “overbought” territory which is a bearish sign. The RSI has also reached its lowest levels in last 14-days which is bearish. Further to this, the RSI has set a new 14-period low while NIFTY has not yet and this is Bearish Divergence as well. The Daily MACD too is bearish as it reported a negative crossover as predicted yesterday. On the Candles, and engulfing bearish line has occurred. The engulfing bearish pattern is bearish if it occurs during an uptrend. It signifies shifting of momentum from bulls to bears. However, this needs an confirmation.

On the derivative front, the NIFTY April futures have shed over 7.64 lakh shares or 4.75% in Open Interest. This continues to signify clear offloading of long positions and profit booking.

Going by the pattern analysis, the Markets have failed to successfully surpass its previous high of 6776 and did not break out above that. It has corrected from those levels while remaining in overbought territory. It is very much likely that this correction continues as very clearly suggested by the lead indicators and is also further supported by F&O data. Any upswings that we would witness would be because of short covering.

Overall, the corrective sentiment in the Markets is likely to continue. Any up move would be sharp short covering from the lower levels. It is reiterated that one should remain away from creating excessive exposure in the Markets. Moderate exposures should be maintained while remaining very much selective on purchases. Overall, cautious outlook is advised for today.

Due to technical glitch, we are not able to send across your Copy of Daily Market Trend Guide in regular PDF Format. The section "Market Trend for Today" is reproduced below. Inconvenience caused is sincerely regretted.

Today expect the Markets to open on a modest and quiet note and look for directions. The session would remain dominated with three distinct factors. The INFOSYS Numbers, the reaction to the modestly weak IIP Data that came in and also the CPI inflation that is slated to come today evening, which is expected to remain modestly higher. In overall terms, the Markets would continue to remain in range bound consolidation.

The RSI--Relative Strength Index on the Daily Chart is 73.1648 and it is neutral as it shows no bullish or bearish divergence or any kind of failure swings. Though, it continues to trade very much in "overbought" territory. The Daily MACD continues to trade above its signal line, but might report negative crossover if the Markets continue to correct in coming sessions.

On the derivative front, the offloading and profit booking continued. This was evident from the fact that NIFTY April futures continued to shed 3.86 lakh shares or 2.34% in Open Interest.

Going by the pattern analysis, the Markets have not given a clear cut breakout above 6776 levels and it continues to trade in "overbought" territory. This will see the Markets continue to trade in a range bound consolidation and some mild correction from these levels cannot be ruled out.

All and all, apart from IT stocks remaining in limelight today, the Markets are all likely to continue to remain in range bound consolidation. However, this form of correction would remain stock and sector specific. Given this fact, it is clear that Markets will not give a run away up move from these levels so easily. Purchases should be kept highly stock and sector specific. While remaining light on exposure, cautious outlook is advised for the Markets.
Milan Vaishnav,
Consulting Technical Analyst,
www.MyMoneyPlant.co.in
http://milan-vaishnav.blogspot.com
+91-98250-16331
milanvaishnav@mymoneyplant.co.in
milanvaishnav@yahoo.com
Posted by MyMoneyPlant.co.in at 4/15/2014 08:59:00 AM No comments: