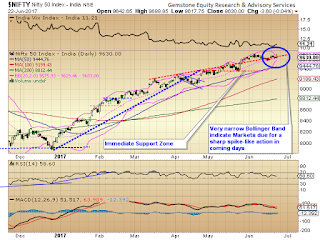 In two or our previous notes, we had emphasized on the need of approaching the Markets with high degree of caution as it remained vulnerable to profit taking bout from higher levels. Experiencing exactly that, the benchmark NIFTY50 on Thursday came off nearly 80-odd points from the high of the day to end flat with a net loss of 3.60 points or 0.04%. Though there were no losses at the Close levels, the Markets have thrown up several signals that the zones of 9700-9710 have now become immediate short term top for the Markets.

The Relative Strength Index on the Daily Chart is 58.4060 and it remains neutral showing no divergences or any failure swings. The Daily MACD stays bearish while trading below its signal line. A Long Lower Shadow has appeared on the Candles. This has significance as it has occurred near the high levels and potentially signals temporary break to the up move.

The NIFTY June Futures showed shedding of Open Interest to the tune of over 6.27 lakh shares or 2.99% in Open Interest. This shows that the Markets witnessed long unwinding of open positions from higher levels.

We cannot ignore the fact that the Bollinger Bands are 74.37% narrow-than-normal due to very low volatility over last couple of days. These are enough signals to point towards a sharp spike-like movement over coming days. Also, the structure of the Daily Chart reiterates the fact that we need to approach the Markets with extreme caution and remain prepared for increased volatility over coming days. 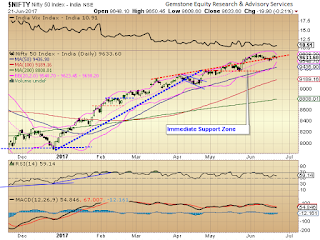 Narrow movements of the Indian Equities continued on Wednesday as well as the benchmark NIFTY50 recovered most of its losses to end yet another day with modest loss. The NIFTY ended the day after losing 19.90 points or 0.21%. The recover that the Markets saw in the last hour of the trade can be attributed to short covering that was witnessed. On Thursday, a subdued opening is expected. Speaking purely on technical terms, the NIFTY once again tested its short term 20-DMA and this level will remain important to watch for if we take a very short term view.

The Relative Strength Index – RSI on the Daily Chart is 59.1365 and it continues to remain neutral showing no divergences on either side. The Daily MACD continues to remain bearish as it trades below its signal line. No significant formations were observed on Candles.

On the pattern analysis front, the NIFTY is seen drifting from the support of the rising trend line that is drawn from 9200 levels. However, important factor is that it tested its short term 20-DMA and this level will remain important to watch for.

Overall, until the Markets resume its up move, we reiterate that Markets should be approached with highest levels of caution. From any time now on, the NIFTY is set to see a sharp movement over coming days on either side. This is suggested by the Bollinger Bands which are currently over 64% narrower-than-normal. This is caused by drop in volatility over previous days and can result into sharp movement on either side. Preservation of cash is advised until a directional bias is established. 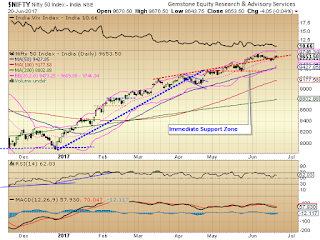 In our previous technical note, we had expected that no follow-up buying would emerge despite a relatively buoyant session on Monday. Very much in line with this analysis, the benchmark NIFTY50 headed nowhere and ended very flat on Tuesday losing 4.05 points or 0.04%. For Wednesday, we expect such tentative mood in the Markets to occur. We still do not expect any runaway rise to resume in the Markets. We expect the zones of 9700-9725 to continue to act as formidable resistance to the Markets.

The Relative Strength Index – RSI on the Daily Chart is 62.0304 and it remains neutral showing no divergences against the price. The Daily MACD is still bearish while it trades below its signal line. No significant formations were observed on Candles.

The pattern analysis suggests the NIFTY drifting below the rising trend line drawn from 9200 levels. In any case, so long as it maintains the levels above 9625, it will avert any downsides. However, given the rising nature of this support line, longer the Markets consolidate, longer it will take to move past its previous highs.

Overall, we still continue to reiterate our cautious view on the Markets. Lack of follow-up buying after relatively better session on Monday is enough warning that weariness still persist in the Markets. More so, the NIFTY still remains overbought on the Weekly Charts. This is enough reason for the Markets to continue to consolidate for some more time. Profits in any further up moves will have to be guarded cautiously.

MARKET OUTLOOK FOR TUESDAY, JUNE 20, 2017
In a much better than expected session on Monday, the benchmark NIFTY50 pullback after couple of days of consolidation. Though it came off a  bit from the high point of the day, it still managed to end the day with decent gains of 69.50 points or 0.72%. There is no doubt that the Markets have as of now averted any possibility of a further decline as it climbed above the 9600-9625 levels. On Tuesday, we expect a modestly positive start, and in all likelihood the Markets may extend their gains and attempt go near 9700-mark. However, we still do not expect any runaway rise beyond these levels immediately. 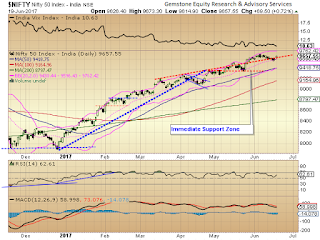 The Relative Strength Index – RSI on the Daily Chart is 62.6094 and it stays neutral showing no bullish or bearish divergence against the price. The MACD continue to trade below its signal line and is bearish. On Candle, a while body has occurred. This very much resembles to a not-so-classic rising star. This is bullish but it needs confirmation on the other day.

Overall, the F&O figures do not suggest any significant change in sentiment. However, Monday’s pullback is due to short covering and it would be important to see if this gets replaced with fresh buying.

All and all, it would be no surprise if we once again see the NIFTY inching upwards. However, it is very important to observe that we cannot ignore the overbought nature of the Markets on the Weekly Chart. So, it would be healthy for the Markets if it still spends some more time consolidating before it breaks its previous high and moves up. We do not expect any runaway rise in the Markets and if the Markets test the levels of 9700-9710 again, it would be important to guard once gain from the profit taking bouts.

MARKET OUTLOOK FOR MONDAY, JUNE 19, 2017
Much on the expected lines, the zones of 9575-9600 continue to act as stiff resistance to the Markets as the benchmark NIFTY50 moved in an extremely narrow range to end the day a minor gain of 10 points or 0.10%. For Monday as well, the behavior of the Markets vis-à-vis the levels of 9575-9625 will be extremely critical to watch for. For the Markets to avoid any weakness from intensifying, it will have to manage to stay and trade above these levels. 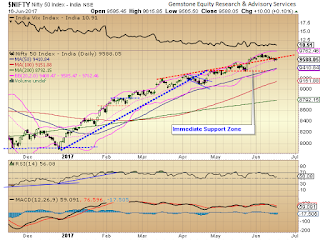 The Relative Strength Index – RSI on the Daily Chart is 56.0764 and it remains neutral showing no divergences against the price. The Daily MACD continues to remain bearish while trading below its signal line. On the Candles,  black candle occurred on the Daily Chart. This resembles not-so-classical spinning top formation given the very small real body which often results from a very narrow difference between the opening and close levels. This behavior also demonstrates tentative approach and lack of conviction with regard to directional bias of the Markets.

The Pattern analysis continues to show the Markets ruling below the rising trend line that is drawn from 9200 levels. Having once dipped below that support, on its way up, this trend line may now act as resistance for the Markets.

All and all, in most likelihood, we expect the Markets to expand its corrective activities and continue to show declining tendencies. With every rise, it will make itself more vulnerable to selling bouts so long as it is trading below 9625. We continue to reiterate to preserve cash and continue to approach the Markets with high degree of caution.

WEEKLY MARKET OUTLOOK FOR JUNE 19 THRU JUN 23, 2017
Our previous Weekly note mentioned about requirement of approaching Markets with great caution. We had also expected some minor corrective action to set in as well. In line with this analysis, with very limited downsides, the benchmark NIFTY50 witnessed some corrective action and ended the Week with net loss of 80.20 points or 0.83% on the Weekly note. The coming week also is likely to see the benchmark struggling to go beyond 9600-mark. The zones of 9575-9625 will remain critical to watch for in the coming week. 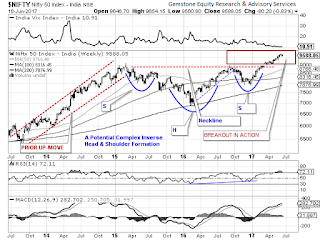 The pattern analysis clearly portrays the breakout that occurred above the 8900-8950 levels remaining in force. Only that it is now little overstretched with lead indicators in overbought territory that it becomes a little cause of concern.

At this juncture, we wish to reiterate that with the undercurrent remaining intact, we still need to approach the Markets with good amount of caution. Unless the NIFTY moves past 9625 and beyond and stays above that, it will continue to remain vulnerable minor profit taking activity. Some stock specific out-performance will continue but over the likelihood of the Markets remaining in corrective mode while keeping its trend intact cannot be ruled out. 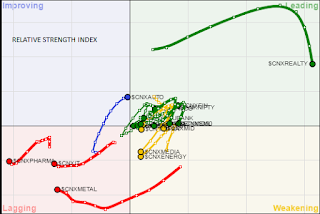 A study of Relative Rotation Graphs – RRG show that the coming week is likely to see the ENERGY, INFRA, CNXMID, and NIFTY Junior continuing to lag on week-on-week basis. We will continue to see sustained outperformance in relative terms in FMCG, Financial Services and Bank Nifty stocks. AUTO is likely to further strengthen its outperformance. CNXIT and PHARMA are expected to consolidate its performance.