MARKET TREND FOR FRIDAY, JULY 17, 2015
The Markets are likely to see a quiet and positive opening again and look for directions at least in the initial trade. The lead indicators suggest that the Markets are likely to continue with its overall up move and continue to surge upwards in coming sessions. However, the F&O data also suggest that we may see some consolidation coming in at higher levels even if the undercurrent remains buoyant.

The RSI—Relative Strength Index on the Daily Chart is 65.4999 and it has reached its highest value in last 14-days which is bullish. It does not show any bullish or bearish divergence as such. The Daily MACD continues to remain firmly bullish as it trades above its signal line.

On the derivative front, the NIFTY July futures have added further over 7.95 lakh shares or 3.88% in Open Interest. This figure firmly suggest good amount of long positions to have been added and it also suggest clear continuation of uptrend in the immediate short term.

Coming to pattern analysis, the Markets confirmed its bottom and have moved past all of its 3 moving averages. It had remained in a intermediary downtrend in the last quarter but now it has attempted to move back into its primary trend. So long as the Markets continues to trade above its 100-DMA, we will see strong undercurrents and the overall buoyancy would prevail. In event of any consolidation or in event if the Markets breach its 100-DMA, it would see itself again in a broad consolidation zone.

Overall, the Markets are likely to see a stable opening and is likely to trade steady at least in the initial trade. All indicators as suggest clear possibility of the Markets extending its gains. However, today and in next few sessions to come, we will have to guard against consolidation from higher levels, which would otherwise be healthy for the Markets in the long run. Overall, positive outlook is advised for the day. 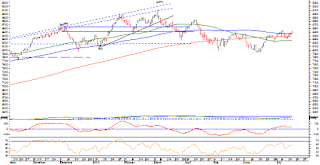 The Markets are likely to see a flat but stable opening today. The technical indicators suggest the Markets are likely to continue with its up move and may remain overall stable. In event of any consolidation, the 100-DMA will act as support. However, the Markets are likely to trade with upward bias. The volumes and the intraday trajectory that the Markets forms post opening would be crucial to watch out for.
The levels of 8560 and 8610 are immediate resistance levels for the Markets. The supports come in at 8460 and 8430 levels.
The RSI—Relative Strength Index on the Daily Charts is 61.3611 and it does not show any failure swings. However, the NIFTY has set a fresh 14-period high whereas the RSI has not yet and this is Bearish Divergence. The Daily MACD continues to remain bullish as it trades above its signal line.
On the derivative front, the NIFTY July futures have added further over 6.20 lakh shares or 3.13% in Open Interest. The NIFTY PCR stands at 1.14 as against 1.07.
Coming to pattern analysis, the Markets are likely to continue to remain its 100-DMA and in event of any consolidation at higher levels, the levels of 100-DMA will continue to act as support. The Markets have a minor pattern resistance at 8560 levels and we might see some minor consolidation taking place around those levels. However, the overall structure of the Markets continue to portray a bullish undertone.
Overall, the Markets might see a flat opening but is likely to remain more or less stable and might continue to trade with an overall upward bias. However, 8560 would be the levels to watch out for as the Markets may face some minor resistance and see some consolidation happening around that level. However, sectoral out performance will continue and any consolidation or minor dips can be utilized for fresh selective buying.
Milan Vaishnav,
Consulting Technical Analyst 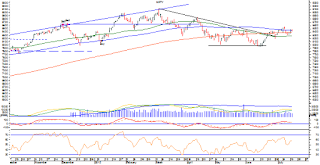 The RSI—Relative Strength Index on the Daily Chart is 57.4388 and it is neutral as it shows no bullish or bearish divergence or any failure swings. The Daily MACD continues to remain bullish as it trades above its signal line.

On the derivative front, the NIFTY July futures have added over 2.11 lakh shares of 1.08% in Open Interest.

Coming to pattern analysis, the Markets have confirmed their bottom formation and are likely to now continue with its up move. With all global and domestic news flows in place, it is now likely to move past its 100-DMA levels as well and therefore trade above all of its three moving averages. Having said this, over coming days, the 50-DMA, which trades below the 100 and 200-DMA will also show improvement. It has already stopped falling and has started rising upward moderately. The Markets are all likely to come out of intermediate bearish trend and get back into consolidation mode once again. However, all this will hold true only if the Markets manages to keep its head above its 100-DMA levels.

All and all, the triggers are positive and going by the structure of the Chart read along with technical lead indicators, we are likely to see the Markets moving past its 100-DMA successfully. It is also more likely to sustain above that level and attempt to move past it also at Close. Modest purchases may be made and every dip should be used to make selective purchases. Still over exposure should be avoided and profits should be guarded at higher levels.

MARKET TREND FOR TUESDAY 14 July 2015
Today also, the markets are expected to start the day on a flat note.  The consolidation , which the market was in for last few trading days had been broken upward.  Nifty has crossed its major technical resistance of its 200 DMA both intraday and at close. This is bullish breakout.

But Pattern Analysis  read along with Moving Averages of Daily High Low Chart of Nifty clearly indicates that even though it has given close above its 200 Day  Daily Moving Average, markets need to open above its another and next resistance of  100 Day Moving Average of Nifty, which is  8454.61 as on today. The market need to open  and sustain above this level for bull run to gain further momentum.  If the markets move past this level, the next  resistance exist at 8561.  If the markets fail to move past its 100 DMA, we  will see  one more stage of market consolidating between its 200 and 100 DMAs.

On Candles Chart, A white body occurred as because markets closed higher than they opened.

Thus, from  Pattern Analysis, read along with the Moving Averages and the above given Indicators,  it can be technically concluded that the markets have given a bullish breakout  from its consolidation phase by moving past its 200  DMA, but for this  momentum to gain further, it need to   clear and sustain above its 100 DMA which is 8454.61 as of today. Otherwise, we will see yet  another phase of consolidation between 200 DMA and 100 DMA of Nifty. Overall technical  picture indicates bias towards bullishness.

For today, protect profits wherever available at higher levels. Further and fresh buying  may be made once market moves above its above given technical resistances.