MARKET TREND FOR FRIDAY, SEPTEMBER 09, 2016
The Markets consolidated with positive bias yesterday as analyzed in our yesterday’s edition and while it ended at 18-month high at Close, the entire IT pack suffered on back of TCS issuing a possible loss of momentum in the BFSI sector. This resulted into opening gap-down losses in all IT stocks which remained throughout the session.  Speaking purely on technical terms, we will see the Markets still continue to consolidate while the  IT pack may see some technical rebound either today or in coming sessions. 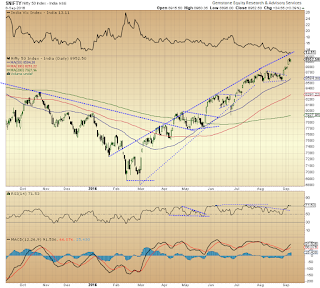 Today, the levels of 8968 and 9025 will continue to act as immediate resistance levels and the supports are expected to come in at 8910 and 8865 levels.

The RSI—Relative Strength Index on the Daily Chart stands at 71.5276  and it once again trades in “overbought” territory. Though it does not show any failure swing, the NIFTY has reported its fresh 14-period high whereas RSI has not. This is Bearish Divergence. The MACD on the Daily Chart still continues to trade above its signal line and is currently bullish.

On the derivative front, the NIFTY September futures have added over 3.43 lakh shares or 1.01% in Open Interest.

Coming to pattern analysis, after forming a high at 8968, NIFTY has been once gain consolidating in a narrow range, very much on expected lines. Such consolidation will continue in coming days as well as the Markets are “overbought” and the lead indicators show bearish divergence indicating temporary fatigue. However, such corrective activity will remain in the form of range bound consolidation and limited declines. On the lower side, the levels of 8720-8750 will continue to led solid support in case of any downsides.

Overall, though the lead indicators continue to remain overbought and show some fatigue, the internal strength in the Markets remain intact and no major downsides are likely. As we had mentioned in our previous editions, sectors like Pharma, Auto and select MidCap have shown exemplary out performance and will continue to do so. Corrective activities will not see any major downsides but intermittent selling bouts and volatility cannot be ruled out. IT stocks may see some technical rebound as the CNXIT stands at 25-month low but displays Bullish Divergence on the Daily Charts. Overall, while avoiding shorts, positive caution is advised for today.

MARKET TREND FOR THURSDAY, SEPTEMBER 08, 2016
Equity Markets took a breather yesterday while ending on a marginally lower note while continuing to exhibit internal strength. Yesterday’s session saw the Markets consolidating on perfectly expected lines. Today as well, we are likely to see some consolidation happening and we will see the session remaining range bound with a positive bias. The levels of 8968.70 will act as immediate very short term resistance levels for the Markets. 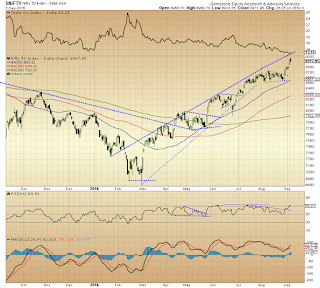 The  RSI—Relative Strength Index on the Daily Chart is 69.9503 and it has just moved below its “oversold” territory from a topping formation. It remains neutral showing no failure swings or any bullish or bearish divergence. The Daily MACD remains bullish while trading above its signal line.

While having a look at pattern analysis, the Markets retraced after intraday highs of 8968.70 yesterday and this level will continue to act as resistance for the immediate short term. It is expected that the Markets will continue to consolidate before it gathers itself for a fresh further up move. In event of further up move, the Markets are likely to track the upper rising trend line drawn from February lows and this will comfortable aid the Markets testing the 9000-and beyond levels. However, before this some consolidation cannot be ruled out and this will remain in form of intermittent profit taking bouts within a range bound movement.

MARKET TREND FOR WEDNESDAY, SEPTEMBER 07, 2016
The sustenance of the opening gains played the part as the Markets perked up even higher to move past 8900 levels to end the day on a robust note yesterday. We will see some consolidation at higher levels but the up move still continue to remain intact and inherent strength on the Daily Charts clearly remain visible. Yesterday the charge was led by Banking and Auto stocks and after some consolidation that is expected, we will see some participation coming in from Pharma and IT stocks which will aid the further up move for the Markets in near term. Today, though opening would be crucial, it is widely expected that we will see the session trading mostly in a capped range with very limited downsides, though some volatility will remain ingrained. The consolidation is likely due to the “overbought” nature of the Markets. 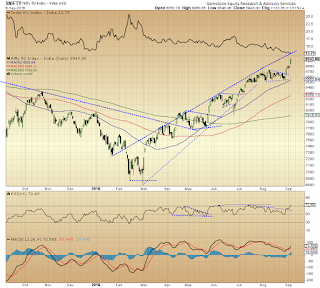 The RSI—Relative Strength Index on the Daily Chart is 72.6939 and it has reached its highest value in last 14-days which is bullish. It does not show any bullish or bearish divergence but it now trades in “overbought” territory. The Daily MACD remains bullish as it continues to trade above its signal line. On the Candles, a big white candle that has occurred after a consolidation lends credibility to the fresh up move.

On the Derivative front, the NIFTY September futures have added over 7.28 lakh shares or 2.20% in Open Interest.

Pattern analysis on the Daily Charts shows a credible fresh up move after three days of consolidation. It is important to note that the Markets are now trading in “overbought” territory and this may lead to some consolidation in the near term. However, the lead indicators supported by F&O data clearly indicate some more steam that is left in the Markets.

Overall, we may see some consolidation coming in as heavily overbought sectors like BankNifty and Auto see themselves consolidating their gains. However, the downsides would remain limited as we will see broader participation from NIFTY Junior, IT and other stocks which have underperformed. Overall, there may be some volatility but downsides may remain limited and we may see the Markets testing 9000-plus levels in coming days.

MARKET TREND FOR TUESDAY, SEPTEMBER 06, 2016
After breaking out from a congestion zone on August 30th, the Markets have consolidated over past three sessions laying good ground for a further up move, Today, Monday, the Markets shall open after a day of holiday. Today’s opening would be crucial to watch out for as we expect a modestly positive opening today. The Markets are expected t o continue with the up move that it began in the second half of the Friday’s session and remain positive at least in the initial stage. The intraday trajectory that the Markets form would be critical for the remaining part of the session. 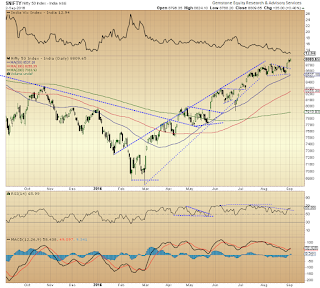 The levels of 8825 and 8865 will continue to act as immediate resistance levels which we expect to get tested. The supports come in at 8750 and 8720 levels.

The RSI—Relative Strength Index on the Daily Chart is 65.9872 and it has reached its highest value in last 14-days which is bullish. It does not show any bullish or bearish divergence. The Daily MACD continues with its positive crossover and it remains bullish as it trades above its signal line.

While having a look at pattern analysis, the Markets have attempted to achieve a breakout in the session of August 30th but it has been under sideways consolidation in last three sessions. With the expected positive opening in the Markets, it is likely that the Markets attempt to move past the critical resistance levels of 8825 and test further levels of 8850 and 8890 levels in coming sessions. In event of any possible intermittent downsides, the breakout levels of 8720-8740 will continue to send supports.

All and all, the expected positive opening and the sustenance of such opening would be crucial for the session today. There is slightly contradictory signals on the  Daily and Weekly Charts. Though Weekly Charts clearly suggest a possibility of a fresh up move the Daily Charts do not rule out the Markets consolidating at higher levels for some more time. Therefore, in event of any intermittent downsides or corrective swings, all such opportunities should be utilized to make fresh purchases on selective note. Overall, the inherent strength remains very much visible on the Charts.