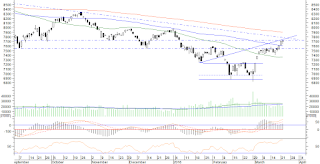 MARKET TREND FOR WEDNESDAY, MARCH 23, 2016
Today’s analysis remain on similar lines that of yesterday. The Markets are likely to open on a flat note and look for directions. With the total pullback being nearly 900-odd points old, and the Markets very clearly approaching its multiple pattern resistances, it is very much likely that the Markets consolidate at higher levels. Either the Markets will consolidate displaying strength just as it did yesterday; or there can be some amount of profit taking at higher levels.

The RSI—Relative Strength Index on the Daily Chart is 66.9470 and it has reached its highest value in last 14-days which is bullish. It does not show any bullish or bearish divergence. The Daily MACD continues to remain bullish as it trades above its signal line.

On the derivative front, the NIFTY March futures have shed further over 4.13 lakh shares or 1.92% in Open Interest. There has been clear reduction in March positions over two previous days.

Coming to pattern analysis, the Markets have pulled back over 900-odd points from the lows that it made in the Budget session. In the process, it consolidated for several days near 7550 levels. This is the level which was a triple bottom of a descending triangle that the Markets broke on the downside and this very level acted as stiff pattern resistance when the Markets were pulling back. Having said this, the Markets have moved past that as well and also its 100-DMA but now it meets multiple pattern resistance at present levels. There are high chances that the Markets may either consolidate at present levels or it may see some minor profit taking from higher levels.

Overall, it is also important to note that today is the last working day of the week as Thursday and Friday are holidays on account of Holi and Good Friday respectively. This may also cause some caution of weigh in to the Markets ahead of the holidays. Having said this, even speaking from the technical perspective, we continue to reiterate our advice to keep purchases very limited and lay more emphasis on protection of profits at higher levels. 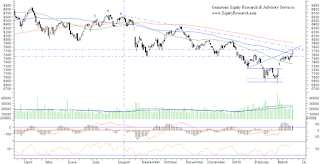 MARKET TREND FOR TUESDAY, MARCH 22, 2016
NIFTY have risen over 880-odd points from the lows it made in the Budget session. Today, the Markets are likely to see a quiet opening and there are all chances that the Markets may see some profit taking or it may consolidate from these levels. Few points from here, the Markets meet couple of pattern resistance on the Daily Charts. Therefore, the intraday trajectory that the Markets form would be critical to watch out for. The chances of some retracement cannot be ruled out.

For today, the levels of 7725 and 7740 will act as immediate resistance levels for the Markets. Supports come in lower at 7610 level.

The RSI—Relative Strength Index on the Daily Chart is 66.5447 and it has reached its highest level in last 14-days which is bullish. It does not show any bullish or bearish divergence on the Charts. The Daily MACD remains bullish as it continues to trade above its signal line.

On the derivative front, the NIFTY March futures have shed over 7.51 lakh shares or 3.38% in Open Interest. The NIFTY PCR stands at 1.05 as against 0.99 yesterday.

Overall, the Markets are all likely to see some consolidation or some amount of profit taking from higher levels today. With the Markets approaching multiple pattern resistance, this possibility cannot be ruled out. It is now advised to refrain from major purchase and greater emphasis should be laid by short term trades to book and protect profits at higher levels. Cautious outlook is advised for today. 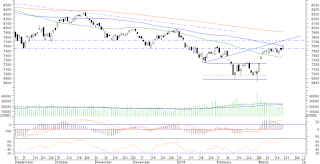 MARKET TREND FOR MONDAY, MARCH 21, 2016
The Markets once again faces a critical test today. On Friday, it has attempted to breakout on the upside while moving past its important resistance levels of 7550. Today, we can expect a modestly positive start to the Markets. Speaking purely on technical terms, since the Markets have ended near the high point of the day on Friday, today, it is expected to continue with its up move. However, today’s expected opening levels would be around its 100-DMA which is 7614 and it would be important to watch the behavior of the Markets vis-à-vis this level.

The RSI – Relative Strength Index on the Daily Chart is 62.5776 and it has reached its highest value in last 14-days which is bullish. It does not show any bullish or bearish divergence. The Daily MACD is bullish as it continues to trade above its signal line. On the Weekly Charts, the Weekly RSI is 48.4872 and it has reached its highest value in last 14-weeks which is bullish. Also, the Weekly RSI has formed a fresh 14-week high and the NIFTY has not yet and this is Bullish Divergence.  The Weekly MACD has reported a positive crossover and it now trades above its signal line and is bullish. However, on the Candle, a Hanging Man pattern has occurred. This pattern has a potential to halt the up move temporarily if it occurs after a up move or near any resistance level.

On the derivative front, the NIFTY March futures have added over 7.71 lakh shares or 3.59% in Open Interest. The NIFTY PCR stands at 0.99 as against 0.96 on Friday.

Coming to pattern analysis, the Markets have attempted a breakout on the upside as it has moved past the levels of 7550. However, it has halted exactly at its 100-DMA which is 7614 yesterday. This level can act as a resistance at Close levels for the Markets. If the Markets move past this level, it can test levels of 7650-7695 wherein it meets yet another pattern resistance. If the Markets choose to consolidate, the levels of 7550 are expected to lend support on the downside. There are chances that the Markets may see some short term consolidation. However, the undercurrent continues to remain buoyant.

It is important to note that the Markets choosing to consolidate on Weekly basis is very much likely as we have a short 3-day week this time with Thursday and Friday being holidays due to Holi and Good Friday. Given this fact, even if the undercurrent remains buoyant, it becomes important to continue to protect profits at higher levels and keep purchases moderate. Overall, positive outlook is continued for today.