MARKET TREND FOR FRIDAY, SEPTEMBER 02, 2016
While trading perfectly on analyzed lines, the Markets consolidated after 3 days of gains and ended the day with minor losses after coming off from its intraday highs. The levels of 8820 mentioned yesterday acted as resistance intraday. Today, on Friday, we once gain expect the Markets to continue to consolidate its gains and continue to trade in a capped range. The session is expected to remain range bound. 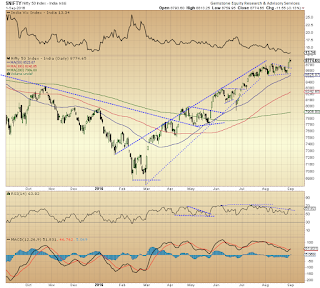 The RSI – Relative Strength Index on the Daily Chart is 63.8215 and it remains neutral as it shows no bullish or bearish divergence or any failure swings. The Daily MACD stays bullish as it trades above its signal line.

On the derivative front, the NIFTY September futures have added over 6.10 lakh shares or 1.82% in Open Interest. The NIFTY PCR stands at 1.02 as against 1.10 yesterday.

Coming to pattern analysis, the Markets have continue to exhibit lot of strength as it showed no decline but consolidated after of 215-odd point of gains. This strength was evident as the Markets showed very limited declines and remained in a very narrow and capped range. The Markets have confirmed its breakout that occurred above the levels of 8728, a immediate top that was formed in the first week of August. Having said this, it becomes important to note that the undercurrent in the Equity Markets continues to remain buoyant and the Markets will continue to see some consolidation in the immediate term while exhibiting lot of internal strength. We expect such consolidation to occur in the form of intermittent selling bouts from higher levels but the overall decline is likely to remain limited.

Overall, in event of any decline, the level of 8700-8728 will continue to lend immediate support to the Markets. The expected range bound movement for the Markets will in fact lay further strength for the Markets to continue with its up move in coming days. Any declines or intermittent intraday selling bouts should be continued to be used to make fresh purchases. As mentioned yesterday by us, Sectoral shift and out performance will continue and we will see BANKNIFTY, PSUBANK, ENERGY and AUTO Stocks outperforming the broader Markets and providing good entry points. However, we may see some caution reigning in as well with Monday being a Holiday on account of Ganesh Chaturthi.

MARKET TREND FOR THURSDAY, SEPTEMBER 01, 2016
The  Markets yesterday continued to surge and ended the day with decent gains but also showed some fatigue at higher levels as it came off from its intraday highs. Today, though we can expect the Markets to remain stable, some signs of fatigue will be clearly visible in the Markets today. The levels of 8819.20 will be important to watch out for and there are chances that some consolidation happens around these levels. 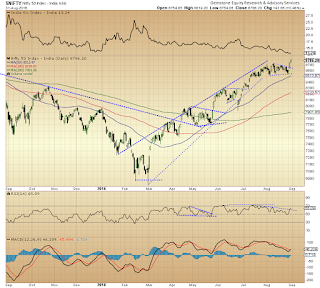 For today, the levels of 8820 and 8855 will be critical levels to watch out for and are likely to act as immediate resistance for the Markets. The supports will come in at 8750 and 8725 levels.

The RSI—Relative Strength Index on the Daily Chart is 65.0915 and it has reached its highest value in last 14-days which is bullish. It does not show any bullish or bearish divergence. The Daily MACD has reported a positive  crossover and it is now bullish as it trades above its signal line.

On the derivative front, the NIFTY September futures have added over 25.72 lakh shares or 8.45% in Open Interest. The NIFTY PCR stands at 1.10 as against 1.06 yesterday.

If we have look at pattern analysis, after remaining in upward rising channel from February lows and after making 8728 as its immediate high, the Markets had turned sideways and had been consolidating in a capped range through major part of August. In previous two sessions, the Markets have achieved a break out on the upside and today’s gains have confirmed that breakout. However, given the fact that the Markets have risen nearly 215-odd points in the last 3 sessions, some amount of consolidation cannot be ruled out. In any case, the levels of 8700-8728 will continue to lend crucial support to the Markets.

There are chances that some amount of consolidation happens at higher levels but it would be healthy for the Markets and the undercurrent continues to remain buoyant. We will see some shift in the sectoral performance but the inherent buoyancy in the Markets will be maintained. Once again while avoiding any blanket shorts in the Markets, all consolidation and minor or intermittent dips should be utilized to make selective purchase in the Markets.

MARKET TREND FOR WEDNESDAY, AUGUST 31, 2016
Keeping in line precisely as analyzed, the Markets staged a decent up move yesterday and attempted to move past its immediate high of 8728 levels while trying to break out of the consolidation zone. Today, we can expect the Markets to open flat and deliberate a bit around 8728 levels but the undercurrent continue to remain strong. Even if the Markets consolidate a bit around these levels, it is likely to show very limited corrective activity and is likely to demonstrate strength as it has done yesterday. 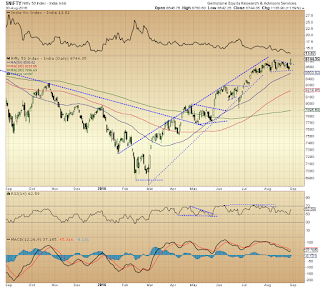 The RSI—Relative Strength Index on the Daily Chart is 62.5865 and it has reached its highest value in last 14-days which is bullish. It does not show any bullish or bearish divergence or any failure swing. The Daily MACD still continues to remain bearish as it trades below its signal line. On Candles, the big white candle that has appeared near the breakout area tends to lend credibility to the breakout. At the same time, a rising window that has occurred usually implies continuation of bullish trend.

On the derivative front, the NIFTY September futures have added over added nearly 9.68% in Open Interest. This implies creation of short positions in the Markets. Also, the NIFTY PCR has risen to 1.06 as against 1.05 yesterday.

Coming to pattern analysis, the Markets remained in upward rising channel since February lows until the beginning of August. However, this Channel was broken as the Markets formed its immediate top at 8728 levels. However, this consolidation turned into limited downsides as the Markets saw just intermittent selling bouts but remained sideways for most part of this month while oscillating around keeping the level of 8520-8550 as sacrosanct support. Yesterday, the Markets have attempted to move past this level and it would be important to see if the Markets continue with its up move it initiated yesterday.

Overall, though buoyant trend is expected to continue, in event of any consolidation once again, the levels of 8690-8740 will be critical to watch out for. The Markets are at the most likely to oscillate in a given capped range before it moves up again. It is best advised to continue to make selective purchases in event of any consolidation and grossly avoid shorts. Overall, positive outlook is advised for today.

MARKET TREND FOR TUESDAY, AUGUST 30, 2016
The Markets traded precisely on analyzed lines yesterday as the opening and the early morning lows acted as major support for the Markets. The Markets rose over 75-odd points from the lows of the day to end the day with modest gains. Today, we can fairly expect the Markets to open on a positive note and continue with its up move at least in the initial trade. Yesterday’ support has kept the Markets into the congestion zone once again and we will see the Markets in this area with positive bias. 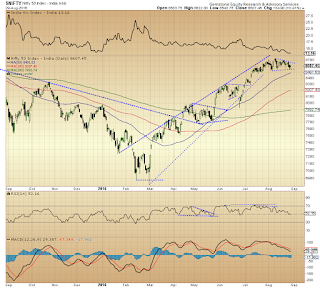 The RSI—Relative Strength Index on the Daily Chart is 52.1590 and it remains neutral as it shows no bullish or bearish divergence or any failure swings. The Daily MACD stays bearish as it continues to trade below its signal line.

On the derivative front, the NIFTY September futures have added over 4.63 lakh shares in Open Interest. The NIFTY PCR stands at 1.05 as against 1.04 yesterday.

Overall, though the Markets have shown good amount of volatility ingrained in it, the inherent buoyancy remains intact. On the other hand, with the Markets yet to move past its critical resistance levels, such intermittent bouts will continue to exist and this will keep the Markets in a capped range and under consolidation with some volatility accompanying it. All dips should be utilized to make fresh purchases so long as the Markets are trading above mentioned critical support levels.

MARKET TREND FOR MONDAY, AUGUST 29, 2016
The Markets continued to remain in corrective mode on Friday as it ended the day with modest losses after coming off from its opening highs. Today, the Markets pose themselves at critically important levels. Markets are expected to open on a modestly negative note and this will see the Markets opening at around Friday’s low levels. These levels are minor pattern support on the Daily Charts and it would be important to see the behavior of the Markets vis-à-vis these levels. Therefore, it would be important to see the intraday trajectory that the Markets form post opening. 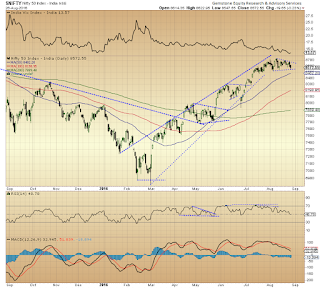 The RSI—Relative Strength Index on the Daily Chart is 48.7796 and it has reached its lowest value in last 14-days which is bearish. However, it does not show any bullish or bearish divergence. The Daily MACD continues to remain bearish as it trades below its signal line.
On the Weekly Charts, the Weekly RSI is 63.9367 and this remains neutral as it shows no bullish or bearish divergence or any failure swings. The Weekly MACD is bullish as it trades above its signal line.

On the derivative front, the NIFTY September futures have added over 9.17 lakh shares or 3.48% in Open Interest. The NIFTY PCR stands at 1.02 as against 0.88.

Coming to pattern analysis, the Markets have been in upward rising channel drawn from lows of February and earlier this month, it halted its up move while it formed its intermediate top of 8728. Since these levels, the Markets have remained in consolidation and have been trading in a capped range all through this month. The movement has remained sideways and the correction has remained in form of limited decline and more of intermittent intraday selling bouts.  Around same levels earlier this month, the Markets also signaled a halt in the up move on the Weekly Charts as well as this up move has been interrupted by a Hanging Man  kind of Candle formation. Since then, over two weeks we have seen a sideways movement in the Markets and it has remained in a corrective / consolidation mode.

Today, with the modestly negative opening expected, the levels of 8540 will be important to watch out for. Any dip below this level will increase the Markets of testing its 50-DMA which rests at 8482 levels today. If the Markets defend the levels of 8540, we will continue to see them trading in a capped range. Volatility will continue to remain ingrained in the Markets and we will also see sectoral out performance taking place in selective spaces.