The Markets ended near the high point of the day after it strengthened in the second half of the session after trading flat initially. Today, we can expect the Markets to open on a mildly negative note and trade negative in the initial trade. However, given the consolidation it has seen, there are chances that the Markets improves as we go ahead in the session in case it opens on a negative note.

The lead indicators remain perfectly in place with RSI on the Daily Charts at 60.4013. It has reached its highest value in last 14-days and is bullish. The Daily MACD too is bullish as it trades above its signal line. On the Derivative front, the NIFTY and Market wide rollovers have been slightly below its 3-month average. Further, NIFTY has added over 23 lakh shares in Net Open Interest and has started the series with the PCR of 1.04.

Overall, though we may see some negative opening in the initial trade, the levels of 8370 and 8325 will act as support and the Markets may consolidate in this given range. However, it is also likely that the Markets improve post such subdued opening as all other indicators remain perfectly in place. Any dip may be utilized for modest and selective buying with vigilant eye on profits at higher levels.
Milan Vaishnav,
Consulting Technical Analyst,
Af. Member: Market Technicians Association (MTA), USA
Af. Member: Association of Technical Market Analysts, INDIA 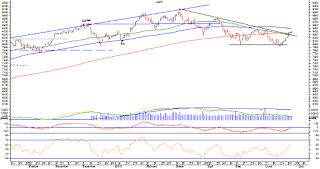 MARKET TREND FOR Thursday, 25 June 2015
We keep today’s analysis more or less on yesterday’s lines. Paring of gains yesterday was more technical than the Greek reason as rollovers dominated the session. The Markets are expected again to open on a flat and quiet note and look for directions. Today is the expiry day of the current derivative series and we will continue to see rollover dominated activities with some amount of volatility ingrained in it.
The levels of 8425 and 8470 are immediate resistance for the Markets. The supports come in at 8330 and 8290 levels.
The RSI—Relative Strength Index on the Daily Charts is 58.5340 and it remains neutral as it shows no bullish or bearish divergence or any failure swings. The Daily MACD continues to remain bullish as it trades above its signal line.
On the derivative front, NIFTY added net of 23.50 lakh shares in Open Interest. NIFTY witnessed 45% rollovers and Market-wide rollovers were seen at 56%.
Coming to pattern analysis, the Markets have pullback from its near term double bottom support of 7990-8010 levels and while doing so have also moved past the falling trend line and 50-DMA resistance of 8300 levels. Having said this, since the Markets have posted eight days of gains totalling to nearly 400-odd points, it would be no surprise if it consolidates briefly at this levels. With the Close hovering around its 200-DMA which is 8360, it would be perfectly natural and fine if the Markets consolidates between 8290 and 8360 range.
All and all, given the expiry day today, the Markets are likely to remain dominated with rollover centric activities. The volumes remained low yesterday but today it might remain bit higher coupled with some amount of volatility ingrained in it. With the chances of the Markets consolidating briefly at these levels, fresh positions should be taken very selectively and should be kept limited. The Markets will consolidate but resume its sustainable up move only after it moves past 8425 levels. Overall, continuation of vigilant approach is advised for today. 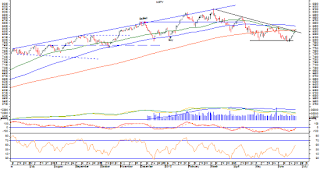 MARKET TREND FOR WEDNESDAY, JUNE 24, 2015
Today, we enter into penultimate day of the expiry of current derivative series and therefore we can expect the session to remain dominated with rollover centric activities. The Markets may open on a flat to mildly positive note and look for directions. Yesterday it has kept hovering around their 200-DMA level which is 8364.  In event of the Markets moving past this level, this will become support in the near term.
The levels of 8410 and 8475 are immediate resistance levels for the Markets today. The supports come in at 8364 and 8291-8310 levels.
The RSI—Relative Strength Index on the Daily Chart is 59.9979 and it has reached its highest value in last 14-days which is bullish. Though, it does not show any bullish or bearish divergence. The Daly MACD remains bullish as it trades above its signal line.
On the derivative front, rollovers continued as the NIFTY June futures shed over 11.23 lakh shares or 8.69% in Open Interest. The July futures added over 20.03 lakh shares or 47.14% in open interest. The NIFTY PCR rose to 1.17 as against 1.14 on the previous day.
Coming to pattern analysis, the Markets have attempted to form a bottom by taking a support on the double bottom support levels at 7950-8000 range. It has then pulled back and has moved past its 50-DMA and 200-DMA. The Markets have managed to show strong possibility of confirming its bottom as it moved past  the falling trend line resistance as well as it 50-DMA but it still trades within the filter of its 200-DMA. If it moves past this level, this level would become its support. In event of any temporary weakness, it is likely to consolidate between its 50-DMA and 200-DMA levels.
All and all, the Markets have continued to inch up but at the same time, it is likely that it sees some profit booking at higher levels and might consolidate in a given range before it resumes its up move. Further, the pending rollovers might induce some ranged trade or even some volatility at some point of time. Though the Markets have shown strong signs of confirming its bottom, it is advised to adopt vigilant approach at higher levels.
Milan Vaishnav,
Consulting Technical Analyst,
Af. Member: Market Technicians Association (MTA), USA
Af. Member: Association of Technical Market Analysts, INDIA


Backed by sharp short covering along with some fresh buying as well, the Markets staged a sharp up move yesterday as it ended the day with decent gains. The Markets saw a positive opening and saw its elf in upward rising trajectory throughout the session. While forming an upward rising channel post opening, the Markets kept posting fresh gradual highs during the day. It also managed to move past the 50-DMA level and downward sloping trend line and tested its 200-DMA levels as well which is 8361.74. The Markets went on to form the day’s high of 8369.45 in the last 30-minutes of the trade. It came off a bit from those levels but decently hanged on to its gains. It finally ended the day at 8353.10, posting a decent gain of 128.15 points or 1.56% while forming a sharply higher top and higher bottom on the Daily Bar Charts. 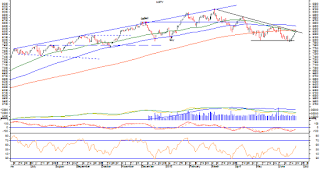 
Today, once again, the Markets are likely to open on a modestly positive to quiet note and look for directions. There are all chances that the Markets continues with its up move at least in the initial trade but it now trades between its 50-DMA and 200-DMA and some consolidation in between these two levels cannot be ruled out. In event of any minor downside, the levels of 8290-8310, which was resistance earlier on, will act as support.


The RSI—Relative Strength Index on the Daily Chart is 58.6791 and it has reached its highest value in last 14-days which is bullish. It does not show any bullish or bearish divergence though. The Daily MACD is bullish as it trades above its signal line. The candles show some more potential upsides for the Markets.


Coming to pattern analysis, the Markets have attempted to move past the falling trend line resistance and 50-DMA which coincided at 8290-8310 levels. Having done this, it is likely to resist at close to its 200-DMA which stands at 8362. In any case, if it happens to move past these levels as well, this will become its support later on. In event of any minor downsides or some amount of consolidation, the levels of 8290-8310 will continue to act as support and will help markets confirm its attempted reversal.


Overall, the upside bias will remain but at higher levels some natural amount of profit taking or some amount of consolidation cannot be ruled out. However, apart from technicals, we will also be dictated by rollover centric activities and given the shorts that exists in the system; we might also continue to see some more upside as well. Some amount of volatility may return and profits if any, should be protected at higher levels. However, even if some consolidation happens, overall bias remains on the upside in the immediate short term.

The Markets continued to end the sixth day with gains on Friday and today as well, the Markets are expected to open on a positive note and look for directions. However, continuing the thread of analysis carried out on Friday, the Markets are approaching its falling channel trend line and 50-DMA as well. This may lead the Markets to consolidate at higher levels.

The RSI--Relative Strength Index on the Daily Chart is 52.0696 and it has reached its highest value in last 14-days which is bullish. Further RSI has made a fresh 14-day high but NIFTY has not. This is Bullish  Divergence. The Daily MACD too is bullish as it trades above its signal line. The Candles imply potential continuation of bullish trend.

The levels of 8260 and 8300 are likely to act as resistance on the upside. However, with still some room for upside in the Markets, we may continue to see select purchases and sectoral out performance in the Markets. Again, some possibility of consolidation in the Markets at higher levels cannot be ruled out.