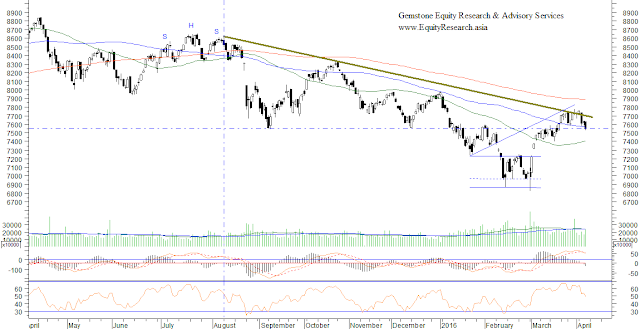 MARKET TREND FOR FRIDAY, APRIL 08, 2016
The Markets yesterday took a bearish turn on expected lines and slipped below its 100-DMA. Today, we can fairly expect the Markets to open on a flat note and look for directions. It is trading slightly below its 100-DMA which is 7569 today and near to its another pattern support of 7550 levels. These two support zones of 7550-7570 will be important to watch out for and any slip below this will induce some more weakness in the Markets.

The RSI—Relative Strength Index on the Daily Chart is 49.6434 and it has reached its lowest value in last 14-days which is bearish. Also, the RSI has set a fresh 14-period low whereas the NIFTY has not yet and this is bearish divergence. The Daily MACD is bearish as it trades below its signal line.

On the derivative front, the NIFTY April futures have shed yet another 14.10 lakh shares or 8.23% in Open Interest. This makes unwinding / offloading of positions very much apparent. The NIFTY PCR stands at 0.76 as against 0.78.

Coming to pattern analysis, as mentioned often in our previous editions, the Markets have kept the pattern resistance of a falling trend line sacrosanct and have reacted from there. This makes the zones of 7700-7750 an immediate top for the Markets. On the lower side, the 100-DMA and a pattern support of 7550 converge to create a lower end of the trading range. Therefore, this keeps the Markets in a broad trading range of 7530-7750 levels and until the Markets takes any directional bias; we will see the Markets oscillating in this broad trading range.

Overall, as mentioned, with the Markets continuing to trade in a broad trading range with the 7550 levels acting as important support it is likely to oscillate in the given range. However, the overall bias continues to remain bearish as indicated by the lead indicators, overall chart structure and the F&O data. Any slip below 7530 will induce further weakness in the Markets. We continue to reiterate our cautious outlook on the Markets for today as well. 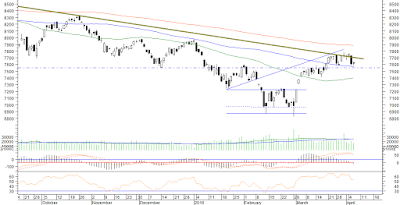 MARKET TREND FOR THURSDAY, APRIL 07, 2016
The Markets yesterday consolidated and the session remained ranged as the Markets ended the day with minor gains. Today, we can expect the Markets to open on a flat to mildly negative note and analysis for today would remain more or less similar on yesterday’s lines. Today, we can fairly expect the markets to remain ranged and trade with downward bias with the level  of 100-DMA acting as major support at Close levels.

The RSI—Relative Strength Index on the Daily Chart is 53.9618 and it remains neutral as it shows no bullish or bearish divergence or any failure swings. The Daily MACD stands negative as it has reported a negative crossover and now trades below its signal line.

On the derivative front, the NIFTY April futures have shed over 7 lakh shares or 3.93% in Open Interest. This very clearly signifies and makes evident offloading and unwinding of long positions in the Markets.

Coming to pattern analysis, the Markets have kept the zones of 7700-7750 sacrosanct as it failed to move past these levels after couple of days of consolidation. With the trend line, which is drawn from 8600 and falling now has values of 7700 which will continue to pose resistance to the Markets. Having said this, as mentioned often in our previous editions, the Markets will show no runaway rise until it moves past these levels. Until this happens, it will continue to see ranged movement with downward bias with the level of 100-DMA acting as important support at Close levels.

Overall, while keeping the analysis on yesterday’s lines, we continue to reiterate a word of caution in the Markets. Practically speaking, from current levels until 7700, the Markets are more in a no-trade zone and it will continue to oscillate with some amount of volatility ingrained in it until it sets a definite directional bias. Until this happens, the levels of 100-DMA will be important to watch out for. While keeping purchases very limited, cautious outlook is advised for today. 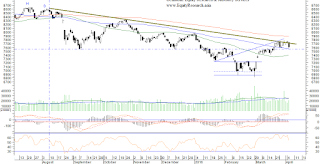 The RSI—Relative Strength Index on the Daily Chart is 53.3429 and it has reached its lowest value in last 14-days which is Bearish. Also, the RSI has set a fresh 14-period low while NIFTY has not yet and this is Bearish Divergence. The Daily MACD still remains bullish but it is moving towards reporting a negative crossover and the histogram slope is also seen rapidly decreasing. On the Candles, a Big Black Candle has appeared. This has established the credibility of the overhead resistance.

On the derivative front, the NIFTY April futures have shed over 9.26 lakh shares or 4.94% in Open Interest. This makes unwinding of long positions very much evident.

Coming to pattern analysis, the markets have held the levels of 7750 and the downward sloping trend line as sacrosanct resistance. This trend line, which is drawn from 8600 levels now trades around 7700 levels because of its downward slope. On its way up, the Markets will continue to resistance to these levels with the levels of 100-DMA acting as immediate support. So long as the Markets trade above 100-DMA, it will remain in a broad trading range with a downward bias.

Overall, the Markets currently remains in a broad trading range of 7700-7750 range on the upper side and 7475 levels on the lower side. Presently it continues to trade with a downward bias with it being more near to its lower base. So long as the Markets maintain itself above 100-DMA we will see it oscillating in a broad range. Any breach below 100-DMA will induce further weakness. We continue to reiterate cautious outlook on the Markets. 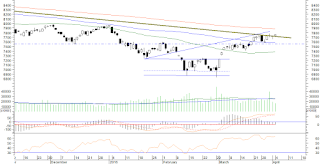 MARKET TREND FOR TUESDAY, APRIL 05, 2016
Today, we are once again likely to see a lower opening in the Markets. With the Markets set to open on a lower note following weakness in the Asian Markets, the levels of 7740-7760 will continue to act as important pattern resistance for the Markets. The RBI too is coming up with its Credit Policy Review later in the morning today and the Markets would react to that as well. A rate cut of 25 bps stands discounted by the Markets.

The RSI—Relative Strength Index on the Daily Chart is 64.5947 and it does not show any failure swing. However, the NIFTY has set a fresh 14-period high whereas RSI has not and this is Bearish Divergence. The Daily MACE stays bullish as it trades above its signal line but the histogram slop is falling indicating MACD moving towards negative crossover in absence of any rise in the Markets.

On the derivative front, the NIFTY April futures have added over 2.59 lakh shares or 1.40% in Open Interest.

Coming to pattern analysis, the Markets have been resisting to the levels of 7740-7760 which have been acting as a pattern resistance over couple of times in previous sessions. Having said this, it becomes important to note that this is the pattern resistance drawn in form of a falling trend line drawn from 8600 levels. However, with the Markets moving sideways in last couple of sessions and with this line falling, the resistance levels too have come down to 7720-7730 levels. There are chances that even with lower openings, the Markets maintain levels above this and resist any downsides. However, if the Markets fall below 7720 levels or open below this, then temporary weakness cannot be ruled out.

Overall, some amount of volatility cannot be ruled out as the Markets will trade range bound in the morning session and then react to RBI Credit Policy Review later in the morning. The entire zone of 7720-7760 will be important to watch out for and this zone practically remains a no-trade zone. Until the Markets move past these levels, all up moves should be utilized to protect profits on existing positions while keeping fresh purchases very limited. Overall, continuance of cautious outlook is advised for today. 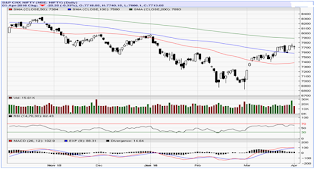 MARKET TREND FOR MONDAY, April 4, 2016
Today’s analysis once again continues to remain on similar lines that of entire previous week. The Markets have ended below 7750 levels and this level will continue to pose resistance to the Markets. Today, we can expect to have a modestly positive opening but at the same time, the zones of 7740-7760 will continue to pose important resistance to the Markets. The behavior of the Markets vis-à-vis these levels will be critical to watch out for.

The RSI—Relative Strength Index on the Daily Chart is 62.43 and it remains neutral showing no bullish or bearish divergence or any failure swings. The Daily MACD stays bullish as it continues to trade above its signal line. On the Candles,  a long lower shadow occurred. Such candles, which are very similar to Hanging Man have a potential to stall up trends, at least on temporary basis. Similar pattern is observed on Weekly Chart as well.  On the Weekly Chart, the RSI is 50.84 and this too remains neutral. The Weekly MACD stays bullish trading above its signal line.

On the derivatives front, the NIFTY April futures have shed over 3.56 lakh shares or 1.89% in Open Interest. This shows some unwinding of long positions from higher levels in the Markets.

Coming to pattern analysis, the Markets have been distinctly resisting to the levels of 7740-7760 zones. These levels represent a important pattern resistance in form of a falling trend line drawn from 8600-levels. It is very much evident that for any sustainable up move, the Markets will have to move past these levels. Also, until the Markets moves past these levels, there is no likelihood of any runaway rise in the Markets. Until this happens, we will continue to see the Markets consolidate and oscillate in a trading range while remaining vulnerable to selling pressures from higher levels.

Overall, the Markets are likely to see themselves resisting at 7740-7760 zones. Also on the Daily and Weekly Charts, the pattern formation distinctly shows some possibilities of the Markets halting its up moves, at least on temporary basis. Fresh and sustainable up moves shall occur only above the 7740-7760 levels. Until this happens, we once again continue to reiterate our cautious view on the Markets and advise vigilant protection of profits at higher levels.