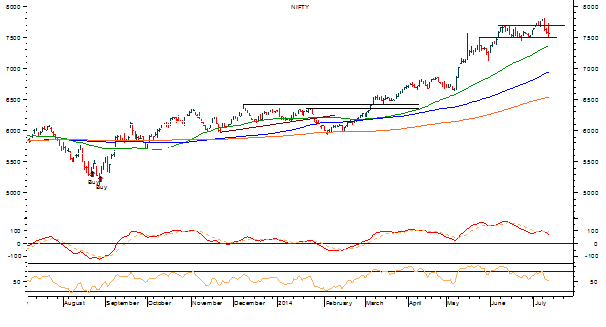 The Markets have put themselves at a very interesting juncture yesterday. After reacting to the Union Budget which remained almost an non-event apart from minor takeaways, the Markets saw a huge 300-odd points movements on either side yesterday. Since it ended the day yesterday near the low point of the day, the levels of 7700 have held out as immediate top. The Markets are expected again to open on a modestly positive note but there are chances that it drifts again towards the lower end of the trading channel.

While maintaining the levels of 7700 as its immediate top, the supports for the Markets come in at 7500 and then at 7415 levels.

The lead indicators too continue to paint a bearish picture for the Markets. The RSI—Relative Strength Index on the Daily Chart is 51.6403 and it has reached its lowest value in last 14-days which is bearish. Further, the  RSI has made a new 14-day low whereas NIFTY has not yet and this is a clear Bearish Divergence. The Daily MACD continues to remain bearish as it trades below its signal line.

On the derivative front, the figures too have been little interesting. Even after such a big move on either side, the NIFTY July futures have added just 13,100 shares or a very nominal 0.10% in Open Interest. Even after such wild swings in the Markets the Markets nearly did not saw any offloading on EOD basis not did it see any addition of shorts when it pared nearly 200-odd points again from its intraday high.

Going by the pattern analysis as well, the Markets are at a critical juncture. The way the Markets have formed and confirmed the immediate top at 7700 levels, on the same lines, it has not yet breached the levels of 7500 as well to give a breakdown. As of today, the Markets have not given any structural breach on the Daily Charts. The weakness shall creep in further if the Markets slips below this critical support of 7500.

All and all, one thing stands clear that the Budget did not bring immediate cheer to the Markets and therefore the level of 7700 remains a immediate top. There are chances that after a modestly positive opening today, we might again test the 7500 levels. In any case we strictly advice against making any fresh purchases until the directional bias is clear. While remaining very light on exposures, adequate liquidity should be continued to be maintained while adopting a crucial approach on the Markets today. Today, expect the Markets to open on a modestly positive note and look for directions. The Markets have failed to give a breakout post 7700 levels. Today, Markets have a Union Budget to react to and this shall keep the Markets utterly volatile. Though the Markets continues to remain in a trading range any weakness may have the Markets test 7500 levels again. With the railway budget remaining a non event and with the Economic Survey painting not so much of a pretty picture, the caution is likely to weigh high on the Markets.

For today, the levels of 7610 and 7700 would act as immediate resistance levels for the Markets today and the supports come in at 7500 and 7410 today.

The lead indicators continue to paint a bearish picture. The RSI—Relative Strength Index on the Daily Chart is 52.9029 and it has reached its lowest value in last 14-days which is bearish. Further, the RSI has set a new 14-period low whereas NIFTY has not yet and this is Bearish Divergence. The Daily MACD remains bearish as it trades below its signal line.

On the derivative front, NIFTY July futures have shed 99,950 shares or nominal 0.73% in Open Interest and this shows that there has been no major offloading that took place yesterday. Also not much shorts have been created as well in the Markets yesterday.

Going by the pattern analysis, the Markets have remaining in a broad trading range of 7500-7700 on the upper side. The way Markets have not given a positive breakout on the upside above 7700 levels, it has also not given a negative break down below 7500 levels.
However, in case of any negative reactions to the Union Budget today, the Markets may test
7500 levels and any drift below  this will induce some more weakness in the Markets.

All and all, the session is likely to remain volatile. Though the Markets may remain range bound in the initial trade it would react as the Budget proposals start coming in. The second half of the session is likely to remain much volatile. We continue to reiterate to strictly avoid any fresh purchases and if at all any purchases are made, it should be limited to defensives while protecting profits at higher levels. Overall, continuance  of highly selective stock specific approach with high degree of caution is advised for today. 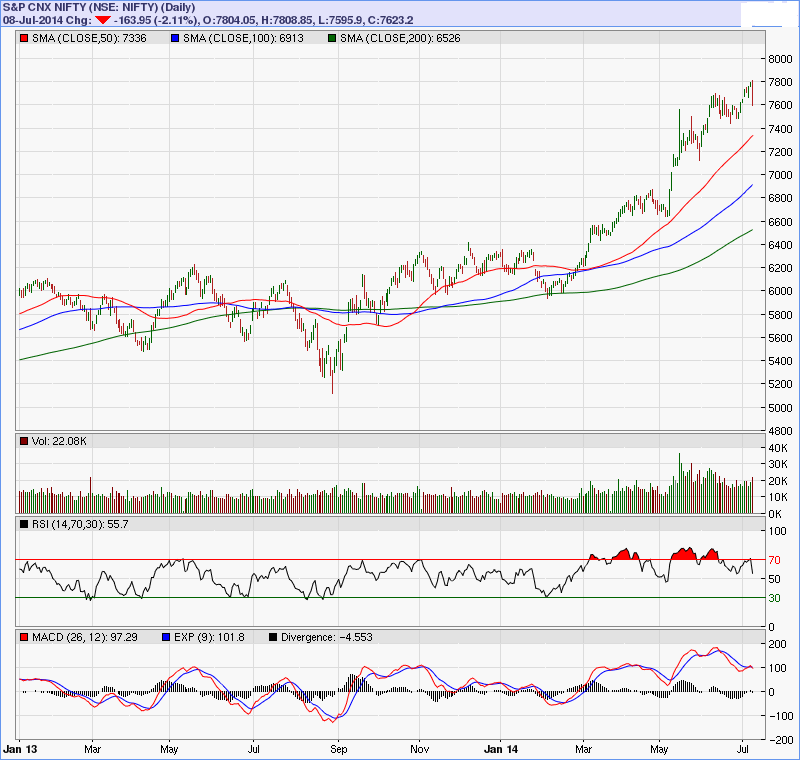 Today, the Markets are likely to see a subdued opening and remain weak in the initial trade and we may see some more pain today. The Markets have breached its important levels of 7700 and in event of a technical pullback, this level of 7700 will act as resistance. After yesterday’s session the Markets have failed to report a breakout while moving past the levels of 7700. The intraday trajectory and volumes will pay a important role. The volatility shall definitely persist as the Markets shall also react to Economic Survey which would be released later today.

The RSI—Relative Strength Index on the Daily Chart is 55.70 and it remains neutral with no bearish or bullish divergences or any failure swings. The Daily MACD reported a negative crossover again and it now trades below its signal line.

On the derivative front, the NIFTY July future have shed over 6.43 lakh shares in Open Interest and this clearly shows that there has been unwinding of long positions yesterday.

Overall, as mentioned earlier, the Markets shall also react to the Economic Survey today and also more to Union Budget coming up yesterday. We may see more weakness coming in if the Union Budget is also viewed more in intentions and less in actions tomorrow. There are all chances of it remaining a non-event for the Markets. Given this scenario, and given that the Markets were anyway due for correction, we advice to stay away from making fresh purchases and continue to maintain liquidity. Cautious outlook is advised for today. MARKET TREND FOR TODAY
Expect the Markets to open once again on a mildly positive note and look for directions. Quiet opening may be expected but for the rest of the week, the Markets shall remain dominated with external events. We have Railway Budget coming up today, Economic Survey tomorrow and Union Budget, the day after. The Markets shall remain range bound and volatile and might see some profit taking bouts as they remain “overbought” on both Daily and Weekly Charts.

The RSI—Relative Strength Index on the Daily Chart is 70.5986 and it has reached its highest value in last 14-days which is bullish. However, it now trades in “overbought” zone. The Daily MACD has reported a positive crossover and now trades above its signal line.

On the derivative front, NIFTY July futures have added 83,400 shares or nominal 0.58% in Open Interest. This shows that there has been no major additions  / offloading of fresh positions in yesterday’s session. Stock future shave shed nearly 1 Crore shares in Open Interest yesterday.

If we look at pattern analysis, the Markets have formed  what is known as ‘rising wedge’ on  the Daily Charts. Such patterns normally induce minor corrections from higher levels. Further the Markets continue to trade “overbought” on both Daily as well as Weekly Charts as clearly evident from the lead indicators.

Given the above reading, there is no possibility that the Markets show a ‘run-away’ upward rise in immediate short term. If it does show such sporadic rise, it would be due to external events that are lined up but under these circumstances fresh open ended buying should be very strictly avoided. Any sporadic rise would make the Markets unhealthy and make profit taking bouts imminent and uncertain. Overall, while maintaining liquidity, very moderate positions with cautious outlook should be taken for today.