The Markets snapped its losing streak yesterday and ended the day with gains while holding on to its 200-DMA at Close levels. Today as well, the Markets are likely to open on a flat note and look for directions. For the Markets to continue with its attempt to pullback, it will have to maintain levels above of 200-DMA and therefore, this level would be critical to watch out for.

The RSI on the Daily Chart stands at 35.7088 and it remains neutral and Daily MACD remains bearish trading below its signal line. While the Markets take a directional call, it is likely to continue to remain volatile especially given the last two days of expiry of the current series. Volatility is likely to stay and we will continue to see intermittent bouts from higher levels. More emphasis should be given on maintaining liquidity but very selective purchases may be made while maintaining highly cautious outlook on the Markets.
Milan Vaishnav,
Consulting Technical Analyst,
Af. Member: Market Technicians Association (MTA), USA
Af. Member: Association of Technical Market Analysts, INDIA

The Markets extended their losses yesterday as well and ended below its crucial support of 200-DMA but has stayed within its filter at Close. Today, expect the Markets to open again on a quiet note and it is expected that it would attempt to find its bottom. The statistics appear bearish and it would be no surprise if the Markets struggles to remain positive.

The RSI on the Daily Charts is 30.4041 and any further decline, even a modest one, will make the Markets "oversold". As mentioned in our yesterday's edition of Daily Market Trend Guide, the reasons for decline in the Markets remain non-technical in nature and therefore, we can only expect the Markets to attempt to take support as this level. Overall, until the Markets shows some signs of bottoming out, it is advised to continue to refrain from taking any fresh positions and maintain cautious outlook on the Markets.
Milan Vaishnav,
Consulting Technical Analyst,
Af. Member: Market Technicians Association (MTA), USA
Af. Member: Association of Technical Market Analysts, INDIA 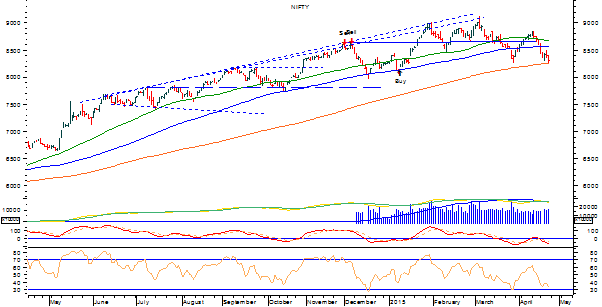 MARKET TREND FOR MONDAY, APRIL 27, 2015
The analysis for today continues to remain more or less on similar lines as the Markets are likely to open on a quiet note and the levels of 200-DMA would be critical levels to watch out for. The Markets are expected to take support at these levels. It is very important to note that the current downsides in the Markets are being contributed to possibility of weak monsoon and weak corporate earnings. However, the other internal reason is also the retrospective tax demand on FPIs on which government has been conveniently changing stands.

Coming to pattern analysis, the Markets nearly tested its 200-DMA on Friday and today as well, this level is expected to act as major support for the Markets. Over and above this, it becomes very important to note that the Markets have totally disregarded the 100-DMA and 50-DMA by failing to resist or take support in the previous sessions. This makes it very evident that the Markets are being subjected to unnatural movements and the major reason is the irresponsible handling of the retrospective tax demands on the FPIs. Otherwise, all other global markets continue to trade near their highs. We have seen a major performance divergence with our Markets.

All and all, given this fact, it happens that the Markets tend to completely disregard the technicals. However, one can expect the level of 200-DMA to play out as support. Further, on the Weekly Charts, the Markets continue to trade above all of its moving averages. Continuing with the advice of refraining from aggressive positions on either side and maintaining liquidity, cautious outlook is advised for today.