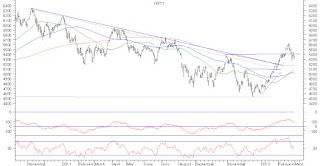 We refer our Daily Market Trend Guide dated Wednesday, February 29th, wherein we had mentioned the levels of 5400-5420 zone acting as still resistance near the resistance line drawn on the Charts. Those levels have so far has continued to act as resistance and has become a immediate top for the Markets.
For today, expect the Markets to open stable and modestly positive and trade with gains at least in the initial trade. However, it is all likely that these gains remain  capped on the upside and the Markets continue to remain in the corrective mode. The levels of 5400-5420 continues to remain stiff immediate resistance. The supports for the Markets come in at 5295 and 5265 levels.
There are no indicators of whatsoever nature that can trigger runaway rise in the Markets. The RSI—Relative Strength Index on the daily Charts is 51.6105 and it shows no negative divergence or failure swings and is therefore neutral. The Daily MACD continues to remain Bearish as it trades below its signal line.
Having said this, it is important to note two other factors that go against any sustainable rise happening in the Markets. First, the crude oil. It has been trading near its yearly highs with Brent seeing high of $130. This is certainly not a positive sign. Secondly, and more technically important, is the “Premium” in the NIFTY Futures. The NIFTY futures have been trading at a premium of over 1% (average of 57 points) to the spot since last almost 15-20 days. This is an indication of a massive built up of longs and with relatively very less retail participation in January and February, any negative news flow can induce a very sharp fall in the Markets.
Having said this, again, we continue to reiterate our cautious stand in the Markets. Longs should be kept very selective and profits very vigilantly protected at higher levels. Some positive trade today many not be ruled out but the Markets continues to lack any major triggers on the upside. It is, therefore, advised to continue to approach Markets with a cautious outlook.
Milan Vaishnav,
Consulting Technical Analyst,
www.MyMoneyPlant.co.in
http://milan-vaishnav.blogspot.com
+91-98250-16331
milanvaishnav@mymoneyplant.co.in
milanvaishnav@yahoo.com
Posted by MyMoneyPlant.co.in at 3/02/2012 08:36:00 AM No comments: 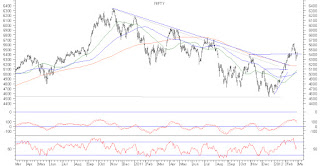 We draw kind attention to our yesterday’s edition of Daily Market Trend Guide wherein, we had mentioned that the levels of 5400-5420 range would be critical resistance to the Markets due to reasons mentioned therein. The Markets opened above those levels yesterday, but did not sustain its opening gains, dropped below and closed below these levels. Thus, this zone, i.e. the levels of 5400-5425 continues to remain immediate resistance for the Markets.
For today, expect the Markets to open on a negative note and look for directions. The intraday trajectory would be crucial but it is expected that the Markets may continue to drift lower. The GDP numbers announced yesterday failed to bring any cheer as it were its lowest in last three years. The levels of 5325 and 5270 are immediate supports on the Charts.
The RSI—Relative Strength Index on the Daily Chart is 54.9848 and it shows no negative divergence or failure swings and is neutral. The Daily MACD is bearish as it trades below its signal line.
All and all, overall pattern analysis and the lead indicators point towards continuation of the corrective trend in the Market. There are no triggers, either on the news flow side or on the technical side which can trigger any fresh up move. Even if it does, the levels of 5400-5425 shall continue to act as immediate resistance for the Markets and any sustainable up move shall occur only after the Markets moves past and sustains above these levels. However, intraday volatility cannot be ruled out. Until this happens, we may either continue to correct or consolidate. Stock specific activities may continued to be seen and selective purchases may be made. Overall, cautious outlook is continued to be advised for today.
Milan Vaishnav,
Consulting Technical Analyst,
www.MyMoneyPlant.co.in
http://milan-vaishnav.blogspot.com
+91-98250-16331
milanvaishnav@mymoneyplant.co.in
milanvaishnav@yahoo.com
Posted by MyMoneyPlant.co.in at 3/01/2012 08:41:00 AM No comments: 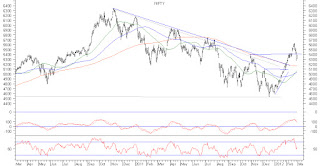 Today it would be critical session for the Markets as it opening vis-à-vis certain levels and its intraday trajectory would decide the trend for today as well as for coming sessions.
The Markets are expected to open positive and likely to trade positive  at least in the initial trade. The levels of 5400,(the blue line that is seen on the Charts) is the support that it broke while coming down is likely to act as resistance and the further resistance would come in at 5425 levels. Thus, the behaviour of the Markets as against the levels of 5400-5425 would be very critically important to decide the trend for the Markets in the coming days. Therefore, the opening of the markets as against these levels and its intraday trajectory would be critically important today.
The RSI—Relative Strength Index on the Daily Charts is 54.3939 and is neutral as it shows no negative divergence. The Daly MACD is bearish as it trades below its signal line.
Having said this, as mentioned above, the behaviour of the Markets as against the mentioned levels of 5400-5425 would be critically important to decide the trend for today and for coming days. Further to this, Markets are also likely to react to the ECB liquidity developments and also to the Quarterly GDP numbers to be announced. So, it is important to note that apart from the technicals, there are more external news flows that the Market is expected to react to.
So, in divergent circumstances, it is advised to remain light on positions until the clear directional track is achieved. No aggressive positions should be taken on either side. The purchases should be very selective and profits too should be protected at higher levels.  Stock specific activities may continue to be seen. Since much would depend upon the intraday trajectory that the Markets forms post expected positive opening, volatility cannot be ruled out. We continue to advice to maintain a cautious outlook for today.
Milan Vaishnav,
Consulting Technical Analyst,
www.MyMoneyPlant.co.in
+91-98250-16331
milanvaishnav@mymoneyplant.co.in
milanvaishnav@yahoo.com
Posted by MyMoneyPlant.co.in at 2/29/2012 08:48:00 AM No comments:

We draw your attention to last couple of editions of Daily Market Trend Guide wherein we have been maintaining that given the unabated rise of the Markets in “overbought” zone, the correction too, would be similarly sharp, and that is what precisely it has been.
For today, we can expect the Markets to open on a moderately positive note and look for direction. After losing 325 odd points in last four session, we might see some nominal rise/pullback in the Markets today, but the support which it broke while coming down could act as resistance. For today, the levels of 5325 and 5390 can act as resistance and the levels of 5245 and 5205 may act as immediate supports.
All lead indicators continue to point towards continuing weakness baring a pullback of a day or so. The RSI—Relative Strength Index on the Daily Charts is 48.2630 and it has reached its lowest value in last 14-days, which is bearish. It, however, does not show any negative divergence.  The Daily MACD continues to remain Bearish as it trades below its signal line.
All and all, we have seen a 33% retracement on Close levels and thus, we may see some sort of pullback. However, as evident from the Charts, the levels of 5400 would now act as immediate resistance for the Markets as it is the support it broke while coming down. So, today, we may see some pullback, there are all chances that volatility too may be seen and despite some intermittent pullbacks, correction in the Markets may continue. Overall, it is advised to remain highly stock specific in making purchases and at the same time, vigilantly protect profits at higher levels. Overall, cautious outlook is maintained for today.
Milan Vaishnav,
Consulting Technical Analyst,
www.MyMoneyPlant.co.in
http://milan-vaishnav.blogspot.com
+91-98250-16331
milanvaishnav@mymoneyplant.co.in
milanvaishnav@yahoo.com
Posted by MyMoneyPlant.co.in at 2/28/2012 08:37:00 AM No comments: 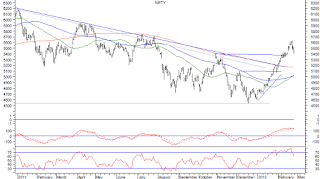 For today, technical charts point towards the correction continuing in the Markets. Today, expect the Markets to open on a moderately negative note and look for directions. All lead indicators too point towards continuing weakness and the intraday trajectory too would play a critical role in deciding the trend for the Markets today.
Today, the levels of 5460 and 5490 are likely to act as resistance and the levels of   5390 and 5325 are likely to act as supports.
The RSI—Relative Strength Index on the Daily Charts is 60.0321 and it has reached its lowest value in last 14-days which is Bearish. Also, RSI has set a new 14-day low where as NIFTY has not yet and this is BEARISH DIVERGENCE. On the Candles too, formations point towards continuing weakness. The Daily MACD has reported a negative crossover one day ago and thus trades below its signal line.
On the Weekly Charts, RSI remains neutral and Weekly MACD trades above its signal line.
Having said this, it can be fairly concluded that all indicators point towards continuation of correction. We may see some intraday sharp recoveries but correction in the Markets is likely to continue. Intraday trajectory would thus be important. Thus, it is advised to refrain from taking any fresh long positions on aggressive manner and purchases, if any, should be made on very selective basis while vigilantly protecting profits. Overall, cautious outlook is advised for today.
Milan Vaishnav,
Consulting Technical Analyst,
www.MyMoneyPlant.co.in
http://milan-vaishnav.blogspot.com
+91-98250-16331
milanvaishnav@mymoneyplant.co.in
milanvaishnav@yahoo.com
Posted by MyMoneyPlant.co.in at 2/27/2012 08:45:00 AM No comments: