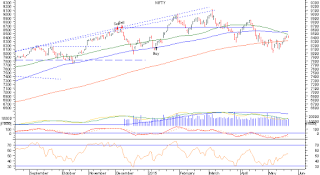 MARKET TREND FOR FRIDAY, MAY 22, 2015
Today’s analysis continues to remain more or less on similar lines. Expect the Markets to open on a flat to mildly negative note and look for directions. Though quiet opening is expected, the Markets will continue to trade in a capped range and some volatility like yesterday cannot be ruled out. The Markets are consolidating going near to its 50-DMA and
though such consolidations are healthy, it would be crucial for the Markets to continue with their up move especially given the expiry in the next week.

For today, the levels of 8475 and 8540 will act as immediate resistance levels for the Markets. The supports come in at 8315 levels.

The RSI—Relative Strength Index on the Daily Chart is 53.1863 and it remains neutral showing no bullish or bearish divergence or any failure swing. The Daily MACD continues to remain bullish trading above its signal line.

On the derivative front, NIFTY May futures have shed over 4.39 lakh shares or 3.23% in Open Interest. Though we can attribute this to short covering, merely attributing this singularly to short covering will not be proper as some amount of rollovers too have begun.

Coming to pattern analysis, the reading remains similar to that of yesterday. After moving past the levels of 200-DMA,  the Markets are showing sideways consolidation and in the process, the two immediate resistance for it are its 50 and 100-DMA respectively. Though such consolidation is healthy, it would now be crucial for the Markets to move past these levels. Until this happens ranged consolidation is expected to continue with the levels of 200-DMA expected to act as support.

All and all, keeping the overall analysis on the similar lines that of yesterday, the Markets may see ranged movement post negative opening and intermittent bouts of weakness cannot be ruled out. Some purchase may be made as sector specific  out performance would be seen but overall, maintenance of caution at higher levels is advised.

MARKET TREND FOR THURSDAY, MAY 21, 2015
Today’s session is likely to remain on similar lines and we can once again expect a quiet to modestly positive opening for the Markets. The Markets are likely to approach its 50-DMA levels and therefore it would be again prone to some consolidation from higher levels. With overall bias on the upside some amount of volatility too is expected to remain in the Markets.

For today, the levels of 8487 and 8535 will act as immediate resistance for the Markets. The supports would come in at 8310 levels which is the 200-DMA of the Markets.

The RSI—Relative Strength Index on the Daily Chart is 53.3037 and it has reached its highest value in last 14-days which is bullish. It does not show any bullish or bearish divergence. The Daily MACD remains bullish as it trades above its signal line.

On the derivative front, NIFTY May futures have shed 19,600 shares or 0.14% in Open Interest. This is a very negligible figure and one can draw inference that OI has remained practically unchanged and therefore no major short covering has happened.

Taking a cue from pattern analysis, as mentioned in our previous editions of Daily Market Trend Guide, the Markets have attempted a reversal after forming its potential bottom on March 7th and have in the process managed to move past its 200-DMA. In today’s session and in the sessions to come, it would be important for the Markets to remain above this 200-DMA level. Some amount of consolidation can be expected at higher levels but any breach below the 200-DMA will bring in some short term weakness in the markets.

Overall, the going has been good for the Markets in the past sessions but the amount of delivery based buying and the conviction that the Markets would otherwise require is missing and this causes a little cause of concern and opens up some chances of consolidation once again at higher levels. Keeping this in mind, very moderate stock specific purchases may be made but cautiously vigilant approach is advised at higher levels.


We had mentioned in our yesterday’s edition of Daily Market Trend Guide that we might continue to witness intermittent profit taking bouts. Markets yesterday ended the day with minor losses as it saw bout of profit taking while coming off from its day’s high. The Markets saw a modestly negative opening and it formed its intraday low of 8335 in the early minutes of the trade. After this, the Markets transformed themselves into rising channel and slowly recovered all of its losses. It continued to display strength as it added to the gains and went on to form the day’s high of 8427.80 in the afternoon trade. However, suddenly the Markets saw a profit taking bout and it came off from its highs and even dipped further into the negative territory. It showed some recovery but finally ended the day at 8365.65 with minor loss of 8 points or 0.10% while still continuing to form a higher top and higher bottom on the Daily Bar Charts. 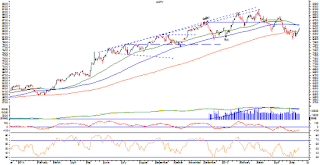 
Today, once again, we can expect a day of consolidation for the Markets. The Markets are expected to open on a flat to modestly positive note and trade stable in the initial trade. However, we can expect the Markets to consolidate at higher levels and continue to remain in a broad trading range with the levels of yesterday’s high acting as immediate resistance.

The RSI—Relative Strength Index on the Daily Chart is 50.7186 and it is neutral as it shows no bullish or bearish divergence or any failure swings. The Daily MACD remains bullish as it trades above its signal line.

On the derivative front, NIFTY May futures have shed 21,050 shares or 0.15% in Open Interest. This OI figures is nominal enough to be called unchanged and some amount of FII buying has been witnessed yesterday as well.

Coming to pattern analysis, the Markets are once again consolidating after it moved past the levels of 200-DMA. In normal course of business, this level of 200-DMA is likely to act as support in event of any consolidation and some downside, if any. The Markets are otherwise expected to slowly approach its 100-DMA levels of 8544 levels in due course of time if it successfully continues it’s up move and if it confirms the bottom that it formed on 7th of May. Coming sessions would be critical to see if the Markets continues with its up move and if at all it consolidates, it holds on to its support of 200-DMA or not.

All and all, we can approach the Markets with positive outlook with initially good opening expected. However, volatility will remain at higher levels and just like yesterday, intermittent bouts cannot be ruled out. Delivery based buying has emerged but it has remained very sector specific yesterday. It needs to percolate to broader base as well to lay good foundation for potential and successful bottom formation. 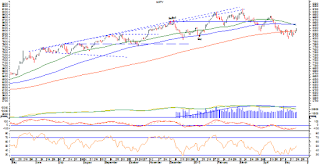 MARKET TREND FOR TUESDAY, MAY 19, 2015
We can once again expect the Markets to consolidate after yesterday’s gains and it would be crucially important for the Markets to maintain levels above of 200-DMA in today’s trade. Today, we can expect a flat to modestly negative opening and we can see some ranged consolidation in the first half with the levels of 200-DMA expected to act as support in case of any weakness. There has been dearth of broad delivery based buying and this is something that will keep the Markets under some check.

The RSI—Relative Strength Index on the Daily Chart is 51.0833 and it has reached its highest value in last 14-days. This is bullish. It does not show any bullish or bearish divergence or any failure swing. The Daily MACD is bullish while it trades above its signal line.

On the derivative front, the NIFTY May futures have shed over 3.85 lakh shares or 2.75% in Open Interest. This once again indicates short covering and attributes yesterday’s rise more to short covering than fresh buying.

While looking at pattern analysis, the Markets yesterday resisted to its 200-DMA in the first half of the session but finally managed to move past and close above it. It would be now crucially important for the Markets to maintain itself above 200-DMA. This level is now expected to act as support in event of any immediate short term weakness. Any breach below this will bring the Markets back into the broad trading range that it has been trading in.

All and all, the lead indicators and over all structure of the Charts point towards positive bias with some amount of short term consolidation that might happen. However, Markets will also need delivery based buying to make a sustainable up move apart from just short covering that it is witnessing. Intermittent volatile bouts cannot be ruled out. Overall, while maintaining modest exposure, positive caution is advised.