The Markets continued to consolidate in a volatile session as it chose not to confirm the breakout as yet and ended the day with nominal losses. The Markets opened on a better than expected positive note and soon formed its intraday high of 8127.95 in the early minutes of the trade. It continued trading with capped gains for some time but soon saw a sudden and bit violent paring of gains. It drifted in the red to form the day’s low of 8057.30. The Markets spent most part of the second half of the session in trying to recover from the day’s low which it did somewhat successfully to trade back into the green. However, it pared that recovery as well towards the end and finally ended the day at 8085.70, posting a nominal loss of 8.40 points or 0.10% while forming a slightly lower top and lower bottom on the Daily High Low Charts. 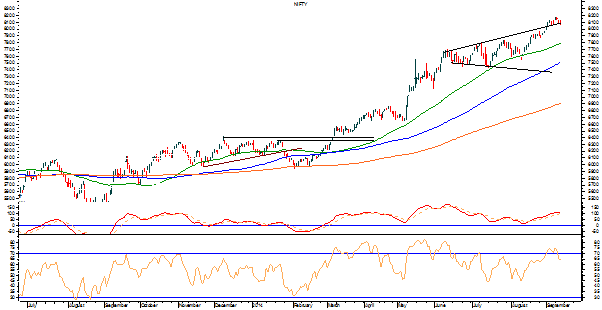 Tomorrow’s analysis would remain more or less on similar lines. The Markets have chose to consolidate and therefore the opening levels would be critical to decide the trend for the day. The Markets are expected to open on a flat to mildly negative note, technically speaking, but it will have to maintain levels above of 8080-8100 to avoid any further weakness from creeping in.

The RSI—Relative Strength Index on the Daily Chart is 64.0595 and it is neutral as it shows no bullish or bearish divergence or any failure swings. The Daily MACD still remains bullish as it trades above its signal line but is moving towards reporting a bearish / negative crossover.

On the derivative front, NIFTY September futures have gone on to shed further 5.60 lakh shares or 3.87% in Open Interest. This further goes on to prove that the Markets have been seeing clear reduction / unwinding of open positions at every higher level.

Returning back to patterns, as mentioned in our previous edition of Daily Market Trend Guide, the Markets have shown a throw back (returning at the same place from where it broke out) and therefore have not validated the breakout. Taking this further, if the Markets happen to close below 8080-8050 levels, it would come back within the topping formation which would certainly prevent the Markets from having any runaway rise. The Markets will have to maintain the levels above of 8100 in order to just consolidate and not getting any weaker.

Overall, keeping this in view, we continue with our advice of taking very restrictive and very selective exposure. Though stock specific and sectoral out performance would certainly remain, any rallies should be used to protect existing profits until the attempted breakout gets confirmed or validated. Until then, while remaining very selective while making new fresh purchases,  the overall exposure should be kept curtailed accompanied with cautious approach for the day.

The RSI—Relative Strength Index on the Daily Chart is 65.0487 and it has just crossed below its topping formation which is a bearish sign. However, it remains neutral as it shows no bullish or bearish divergence of any failure swings. The Daily MACD continues to trade above its signal line.

On the derivative front, the NIFTY September futures have shed further over 6.90 lakh shares or 4.55% in Open Interest. This is clear indication that the long unwinding at higher levels has continued and there has been clear reduction in the long positions.

Going back to pattern analysis, the Markets had attempted a breakout as it move passed the levels of 8080-8010. However, after making of top around 8180, it has shown a throw back and has come again at a place from where it broke out. However, it would be important to see if the Markets reverses or else any downside from here would take the Markets once again within the broadening formation and the levels of 8180 would be come immediate top and the attempt to breakout would turn out to be a false signal or whipsaw.

Overall, the opening levels and the trading of the Markets above 8080-8100 would decide the trend for this particular session as well as for coming days. It is advised to continue with the policy of stringent profit protection at higher levels even if it comes at the cost of booking profits bit early. Very selective purchases may be made as sectoral out performance would be seen. But it is advised to keep purchases at moderate levels and continue to maintain caution for the day. 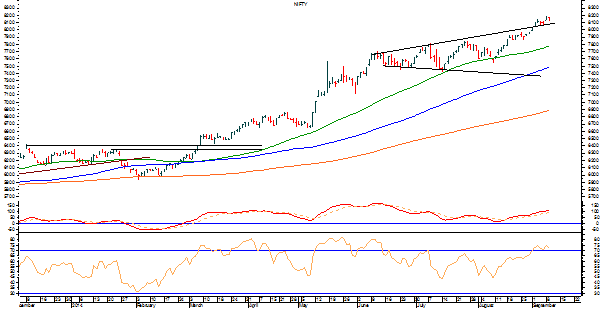 The Markets currently remain in completely indecisive state as it has shown a mild throwback while attempting a breakout from the rising trend line. Tomorrow as well, such dilemma of the Markets is likely to remain evident. The Markets are expected to open again on a quiet note but to continue and confirm the breakout the Markets will have to move past its previous high with good participation and on the other hand will have to trade above 8120-25 levels to avoid any weakness from creeping in.

The levels of 8175-80 and 8215 would act as immediate resistance levels. Though on the higher side, the Markets would be trading in uncharted territory. On the downside, the levels of 8120 and 8040 are likely to act as supports.

The RSI—Relative Strength Index on the Daily Chart is 72.3130 and it is neutral as it shows no bullish or bearish divergence or any failure swings.  The Daily MACD continues to remain bullish as it trades above its signal line.

On the derivative front, NIFTY September futures have shed over 6.59 lakh shares or 4.17% in Open Interest. This, so far as standalone figures go, clearly indicates shedding of open positions  / unwinding at higher levels.

Returning to  pattern analysis, the Markets have attempted to breakout of the rising trend line as evident from the Daily Chart. However, instead of giving a clear breakout, it has shown a mild throwback. However, in order to achieve a clear breakout, it will have to move past its previous high with high volumes and stay above that. However, it is also important to note at this juncture that the Markets are trading “overbought” on the Daily Charts and this may pause a question on the validity of the breakout or the attempt of such breakout.

Overall, with clear and convincing breakout yet to happen, in the event of the Markets breaching the levels of 8120-25, there are chances that the Markets return back within the broad formation. Even if it breaks out higher, the overbought nature of the Markets would make things difficult on the higher side as well. Such circumstances call of very high degree of caution on the upside and the profits should be very vigilantly protected. Overall, while remaining light on overall exposure, continuing cautious approach is advised. 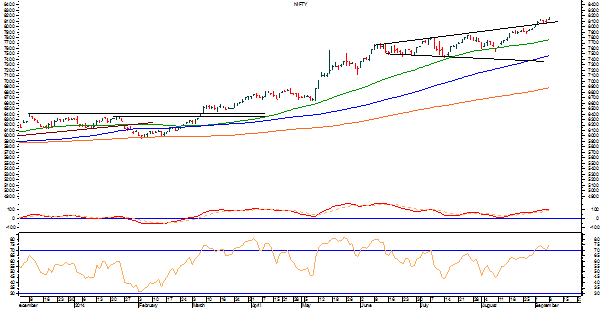 Since the Markets have ended the previous session near the high point of the day, technically speaking, the Markets are expected see a quiet opening but trade positive in the initial trade. Though the Markets may continue with its up move, it should be noted that the Markets trade in “overbought” territory and also in divergence with the reading given by the F&O figures over last two days.

The Markets trade in uncharted territory. The resistance can be expected at 8180 and 8215 levels. The supports come in much lower at 8110 and 8060 levels.

The RSI—Relative Strength Index on the Daily Chart is 75.0847 and it has reached the highest value in last 14-days and this is bullish. Though it does not show any bullish or bearish divergence, it trades in “overbought” zone. The Daily MACD trades above its signal line.

On the derivative front, NIFTY September futures have added over 5.04 lakh shares or 3.29% in Open Interest. This shows that there has been fresh addition of long positions with the rise in NIFTY. However, the previous two sessions had shown significant decline in the Open Positions.

Going back to pattern analysis, the Markets have attempted to break out of the rising trend line. In normal circumstances this translates into a fresh buy signal but at the same it needs to be taken note of that the Markets trade quite in “overbought” territory. This makes the Markets vulnerable to pressure from higher levels, or at least a throw back.

All and all, though the Markets have attempted a fresh breakout, we should a great word of caution. It is strongly advised to not to resort to fresh buying until profits are protected in current positions. As a matter of fact, even the defensive sectoral indices trade in “overbought” territory and this makes the Markets vulnerable to throwbacks, if not a correction. Overall, highly cautious outlook is advised.