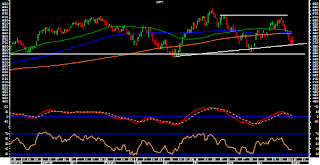 There has been a deviance from the performance of the Global Markets which closed strong yesterday and our Markets. Today’s analysis remains more or less similar to that of yesterday. As evident from the chart, the Markets have held on to the pattern supports and today, we can expect the Markets to open on a positive note and look for directions. It would be important for the Markets to maintain this pattern support. Global environment is quite supportive of this.

The RSI—Relative Strength Index on the Daily Chart is 38.1672 and it has reached its lowest value in last 14-days. However, it does not show any bearish divergence. The Daily MACD continues to trade below its signal line.

However, on the Candles, Engulfing pattern has occurred. If the engulfing bearish pattern occurs during a downtrend (which appears to be the case with NIFTY), it may be a last engulfing bottom which indicates a bullish reversal.  The test to see if this is the case is if the next candle closes above the bottom the current (black) candle's real body.

On the Derivative front, NIFTY August futures have shed over 2.84 lakh shares or little over 1.70% in Open Interest. This although shows some shedding of positions, but at the same time, this has been less intensive than previous sessions. It would be important to see that these gets replaced with fresh longs.

Important to note here again is that  as mentioned in our previous edition of Daily Market Trend Guide, almost all components of BankNIFTY, NIFTY and CNX MIDCAP have gone deeply oversold. This is bound to led support at lower levels and would go a long way in helping the Markets hold on to the mentioned pattern support.

All and all, positive opening likely today and it would be important for the Markets to maintain those opening gains and capitalize on that. With the Markets trading near supports and with potential signs of pullback which is long overdue and imminent, it is advised to strictly avoid shorts. At the same time, too much of aggressive longs too should be avoided as the directional trend is yet not clear. However, with bias remaining towards imminent pullback, cautious optimism is continued to be advised.

The Markets saw a relief recovery from the day’s low after a negative start to end the day on modest losses. The Markets opened on a negative note and soon plunged to the day’s low of 5675.775 in the early minutes of the trade. After having made that bottom in the early morning trade the Markets saw some minor recovery and continued to trade sideways in the first half of the session. The Markets saw some more recovery coming in the second half of the session as the Markets almost pared all of its losses to trade near the previous day’s close. After trading in capped range again near those levels, it finally ended the day at 5742, posting a net loss of just 13.05 points or 0.23%. The Markets recovered almost 70-odd points from its day’s lows but has continued to form a lower top and lower bottom on the Daily High Low charts. 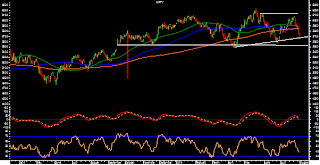 The Markets have seen a strong short covering from the lower levels yesterday and today as well, it is likely to open on a modestly positive note and look for further recovery and relief rally. The Federal Announcements yesterday has not brought in anything negative and this has helped the global markets trade stable. The intraday trajectory would continue to remain important and we are likely to see the Markets continue with the recovery, at least in the initial trade.

The RSI—Relative Strength Index on the Daily Chart is 38.9770 and it has reached its lowest value in last 14-days. However, it does not show any bearish divergence on the charts. The Daily MACD remains bearish as it trades below its signal line. On the Candles, A long lower shadow occurred.  This is typically a bullish signal (particularly when it occurs near a low price level, at a support level, or when the security is oversold).

On the derivative front, the NIFTY August futures have shed over 6.50 lakh shares or 3.76% in open interest. This very clearly signifies that the recovery that we witnessed yesterday was on account of very strong short covering.

Again, as we had mentioned in our yesterday’s edition of Daily Market Trend Guide that almost all components of NIFTY and BANKNIFTY and very good liquid MIDCAP Stocks are trading OVERSOLD or nearly OVERSOLD. This is likely to lend support the Markets which has witnessed significant shorts being built up in the previous sessions.

All and all, there are strong chances that after a modestly positive opening, the Markets continue with its attempt to pullback after recent losses. Though the intraday trajectory would be important to determine the trend, some volatility as well cannot be ruled out. However, still given the shorts that exists and given the fact that major stocks trade nearly OVERSOLD, such pullbacks cannot be ruled out. Given this reading, we continue to advice to keep making selective purchases, of course without compromising on liquidity. While avoiding shorts, cautious optimism should be continued.

The Markets had a thoroughly disappointing session yesterday after it reacted negatively to RBI announcements as it saw selling pressure after the announcements coming in and went on to end the day near its lowest point. The Markets opened on a flat note and moved absolutely flat and sideways until the RBI announcements came in. It reacted momentarily in volatile manner as it gave its day’s high of 5861.30. However, after this, it very quickly pared its gains and traded flat. The pressure on the Markets intensified in the second half as the Markets gradually kept losing ground. It went on to give the day’s low of 5747.60 as it came off over 110-odd points from its day’s high. No major recovery was seen from these lows and the Markets ended the day at 5755.05, posting a net loss of 76.60 points or 1.31%. 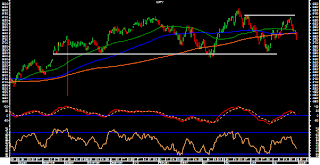 The Markets have ended the day yesterday below its 200-DMA and is likely to see a flat opening again today. Given the derivative figures, the Markets may attempt to find its bottom after initial flat to mildly negative trade. Under such formations, like yesterday, the intraday trajectory would continue to remain utmost important. It is important to note at this juncture that the Markets are defying the technicals and the F&O data which have suggested heavy resistance to such down move.

The RSI—Relative Strength Index on the Daily Chart is 39.6983 and it has reached its lowest value in last 14-days. However, unlike last few days, it has NOT shown any bearish divergence today. The Daily MACD continues to trade below its signal line.

On the derivative front,  the NIFTY August futures have shed over 7.86 lakh shares in Open Interest and this is not a good sign. This suggests that some long unwinding has been done and it needs to be seen now if this gets replaced with fresh longs.

It is important to note at this juncture that during the last entire week, the Markets have acted in total defiance to the technicals and the lead indicators. Even it has defied what the F&O data has suggested. Even when some shedding of some OI has been reported, it is very important to note that almost all components of NIFTY and BANKNIFTY now stands heavily OVERSOLD. Given this, if we purely consider the technicals the downside remains limited.

Given the above reading, the best option for a retail trader / investor is to stick to the technical picks and use this recent downside to accumulate good blue chips which are being traded with hammered prices. Shorts should still be avoided as a pullback now seem imminent and can happen any time. This time is best to pick up select stocks as selective out performance is bound to happen. While maintaining adequate liquidity, very selective purchase should be made and cautious optimism is advised for today. 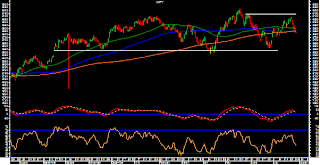 For today, we are likely to see some respite from the weakness that we have been seeing. However, today, the levels of 200-DMA would be extremely critical. We are expected to see mildly positive opening around the 200-DMA levels and therefore, after opening, the behaviour of the Markets vis-à-vis the levels of 200-DMA would be critically important. It would be important for the Markets to move past those levels and trade above that.

The lead indicators continue to show some weakness. The RSI—Relative Strength Index on the Daily Charts is 44.1519 and it has reached its lowest value in last 14-days which is bearish. It has also given its new 14-day low whereas NIFTY has not yet forming a bearish divergence. The Daily MACD remains bearish as it trades below its signal line.

On the derivative front, NIFTY Futures added nominal 1.23 lakh shares or 0.93% in Open Interest. At least there has been no shedding of Open Interest reported. Stock Futures too have added in Net Open Interest. Both FIIs and DIIs have remain net buyers in Cash and Derivative segments.

Having said this, the Markets are also likely to react to the RBI policy review. There is a market consensus about its outcome so there is little chance that the Markets gives it a negative continuing reaction. There are some chances of some knee jerk reactions but more or less, the downside remains very sell as most of the banking stocks and banknifty itself remains oversold.

All and all, we are likely to see some range bound movement in the morning trade and thereafter might see some directional consensus. We still continue to advice to strictly avoid shorts and use the downside to pick selective stocks while avoiding aggressive positions. Even in case of some negative reaction, the downside in the Markets now remains very limited and the bias remains on the pullback. Overall, cautious optimism is continued to be advised for today.