MARKET TREND FOR FRIDAY, SEPTEMBER 23, 2016
Indian Markets, along with Global Markets reacted much positively to the Federal Reserve’s decision to keep the rate unchanged as it opened with a gap up and ended the day with decent gains. It is worth nothing that the Fed’s outcome was very much on expected lines. Though the Markets are likely to show upward bias, some possibilities of consolidation at higher levels cannot be ruled out. Though we may see continuation of yesterday’s up move, some amount of vigilance and caution is advised at higher levels as it will be some time before we see any runaway rise in the Markets. 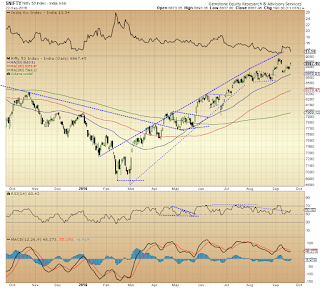 The RSI—Relative Strength Index on the Daily Charts is 60.4174 and it remains neutral as it shows no bullish or bearish divergence or any failure swings. The Daily MACD still remains bearish while it  trades below its signal line. On the Candles, some contradictory reading as occurred. Yesterday’ session has seen a rising window occurring where a top of the previous shadow is below bottom of the current shadow and this typically implies continuation of bullish trend. On the other hand, yesterday’s session has also seen a Spinning Top occurring. Such session have a typically small real body and has a potential to temporarily halt up moves. However, both of these formations require confirmation on the following day.

On the derivative front, the NIFTY September futures have shed over 1.94 lakh shares or 0.60% in Open Interest and this indicates minor short covering in the Markets.

Coming to pattern analysis, the Markets have attempted to move up again after consolidating since last four sessions. Any normal up move will see the Markets approaching its previous immediate high of 8968 levels. However, the overall structure on the Charts do not rule out the possibility of the Markets consolidating before it gives any runaway rise.

All and all, though the undercurrent continue to remain bullish some amount of consolidation before Markets show strong up move and attempt to scale new highs cannot be ruled out.  In any case that is likely to remain range bound. It is advised to continue to make selective stock specific purchases. IT and Banks may consolidate from here and select MidCaps will continue to out-perform. Though vigilant profit protection is advised at higher levels, cautious optimism is advised for today.

MARKET TREND FOR THURSDAY, SEPTEMBER 22, 2016
We had mentioned about possibility of the Markets remaining choppy yesterday. Keeping in line with the analysis, the Indian Equity Markets had a volatile and choppy session while it ended on absolutely flat note after coming off nearly 50-odd points from the high point of the day. Today, we will see the Markets trading purely on technical parameters and some amount of fatigue remains evident on the Daily Charts. Though BoJ move on not reducing interest rates and making some adjustments in the stimulus remained a non-event, consolidation is likely to continue if we speak purely on technical terms. 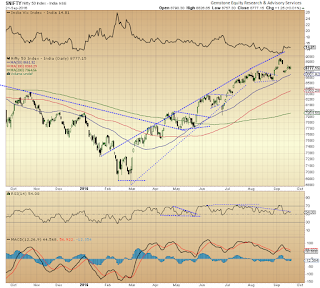 The RSI—Relative Strength Index on the Daily Chart is 54.0819 and it remains neutral as it shows no bullish or bearish divergence or any failure swings. The Daily MACD stays bearish trading below its signal line.
On the derivative front, the NIFTY September futures have added over 1.31 lakh shars or 0.41% in Open Interest.

Looking at pattern analysis makes one thing quite evident that the Markets have consolidated in a narrow range over last four sessions. It is also worth noting that after making an immediate top of 8968 on the Daily Charts and after showing 100% throwback to 8700-8730 zones from where the Markets broke out, the level of 8847 has become a lower top for the Markets. In other words, it would be critically important for the Markets to move past the level of 8850 to remain in sideways consolidation. Any failure to do so and any drift towards 8700 levels will see some short term negative bias.

Overall, Federal Reserve not rising rates has been largely discounted for. Any negative surprise of Fed rising the rate will certainly have negative effect. However, if the Fed keeps the rate unchanged as widely expected, we will see equity markets will see themselves being ruled purely by technical factors. Though sectors like IT, Metals and select Mid Caps will continue to out-perform, cautious view on the Markets is advised for today.

MARKET TREND FOR WEDNESDAY, SEPTEMBER 21, 2016
Caution continued to weigh heavy on the domestic equity markets as the NIFTY remained under pressure and range bound on Tuesday while it ended the day with modest losses. Today as well, we continue to keep our analysis on similar lines. While the trade with see some reactions from the changes expected from the BoJ front, caution will prevail ahead of Federal Reserve which will decide on interest rate hike. Over 90% of the participants polled do not expect a hike. However, the session is likely to remain range bound and choppy. 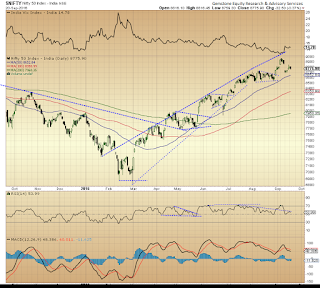 The RSI—Relative Strength Index on the Daily Chart is 53.9872 and it remains neutral showing no bullish or bearish divergence or any failure swings. The Daily MACD stays bearish trading below its signal line. An Engulfing Bearish Pattern has occurred on the Daily Charts. Since this has occurred during an pullback, it has a potential to halt the pullback briefly and cause the Markets to consolidate for some more time. However, this needs confirmation.

On the derivative front, the NIFTY September futures have shed over 1.23 lakh shares or 0.38% in Open Interest. This shows minor offloading / unwinding of long positions in the Markets.

Pattern analysis clearly depicts unsettled conviction of the participants on the Daily Charts. Even after receiving 100% throwback from the highs of 8968, the Markets have been indecisive while pulling back and during this process, the levels of 8730-8690 zone will continue to act as major pattern support. So long as the Markets trade above these levels, it will just consolidate. Any breach below this will bring in some weakness for the immediate short  term.

Though some caution is clearly visible on the Charts, the global Markets have been trading around its medium term pattern support. With the fact that no rate hike is expected, lot of such developments seem discounted for in the current levels and we might see the up move resuming in coming days. However, as of now, with caution very clearly visible on the Daily Charts, we reiterate our positive but cautious view on the Markets. Though sectoral and individual stock out-performance will continue choppiness cannot be ruled out.

MARKET TREND FOR TUESDAY, SEPTEMBER 20, 2016
Monday’s session remained extremely range bound as the NIFTY moved in a narrow 20-odd points for the day while the Markets ended the day with modest gains. Today, our analysis remains on similar lines that of yesterday as the Markets are likely to continue to positively consolidate. The global markets too have attempted to stabilize around their key supports and this likely to positively aid the consolidation of domestic markets. BoJ, which is likely to make some critical changes with regard to Quantitative Easing and the Federal Reserve, which will cast its interest rate decision will solicit some reaction from the Markets as well. 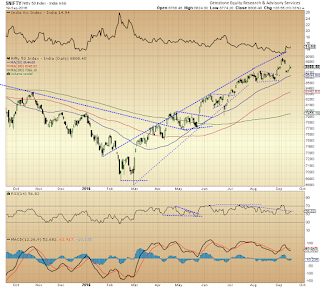 The RSI—Relative Strength Index on the Daily Chart is 56.8151 and it remains neutral as it shows no bullish or bearish divergence or any failure swings. The Daily MACD stays bearish while it trades above its signal line.

On the derivative front, the NIFTY September futures have added over 2.88 lakh shares or 0.90% in Open Interest.

Pattern analysis clearly suggests that the Markets are currently undergoing range bound consolidation and the undercurrent remains buoyant. After making a top at 8968 levels, the Markets achieved 100% throwback to 8700-8730 levels and it took support there. These levels continue to act as immediate major support and so long as it trades above this critical support zone, it is laying groundwork for a further up move. However, in coming days, it should be no surprise if we see capped trading range and some positive consolidation.

All and all, the session should be approached with positive bias. Though some amount of volatility cannot be ruled out, all dips should be continued to be utilized to make selective purchases while avoiding shorts. Sectoral out-performance will continue and stock specific action will dominate coming sessions. Overall, positive outlook is advised for the day.

MARKET TREND FOR MONDAY, SEPTEMBER 19, 2016
Friday’s session remained extremely choppy as the Markets saw an exceptionally strong start but at one point came off nearly 90-odd points from the high point of  the day to end the day with modest gains. Today, we can expect a soft start to the session and we might see some more consolidation and volatility staying in the equity markets and the level of 8968 will continue to act as immediate sacrosanct resistance levels in coming days. 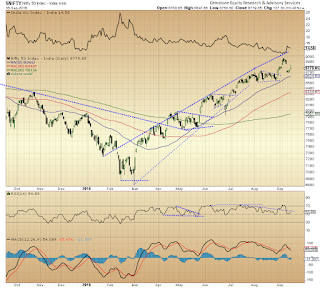 The RSI—Relative Strength Index on the Daily Chart is 54.8875 and it remains neutral as it shows no bullish or bearish divergence or any failure swings. The Daily MACD stays bearish trading below its signal line. On the Candles, a long upper shadow occurred. Such formation on Candles has potential to halt any up move and may cause the Markets to consolidate and resist up moves. On the Weekly Charts, the Weekly RSI is 66.4487 and it has just crossed below from the topping formation which is bearish.  Though it does not show any bullish or bearish divergence or any failure swing. The Weekly MACD stays bullish as it trades above its signal line. On the Weekly Candles,  a falling window occurred. This, just like the Candle on the Daily Charts, has a potential to cause the Markets to consolidate.

On the derivative front, the NIFTY September futures have minor increase as it added just 80,925 shares or 0.25% in Open Interest.

While having a look at pattern analysis, the Markets have attempted a pullback after seeing 100% retracement / throwback from 8968 levels after achieving a breakout from 8700-8730 range. These levels, so far have acted as support while the Markets corrected while making 8968 as its immediate top. This level will continue to act as immediate resistance in coming days. It would be critically important to see the Markets trading above 8700-8730 range. If the levels are breached, it can bring some more weakness in the immediate short term.

All and all, we are likely to see the Markets remaining in corrective mood some range bound trade with some good amount of volatility cannot be ruled out. We will continue to see out performance from select stocks and all dips are likely to get utilized in making selective purchases. However, any runaway rise in the Markets is not expected.