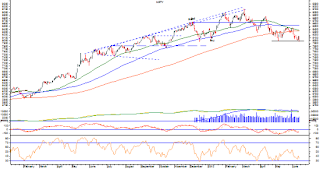 MARKET TREND FOR FRIDAY, JUNE 12, 2015
Markets have ended the day yesterday at the lowest point of the day. Technically speaking, it is likely to open on a modestly positive note and trade positive in the initial trade. However, there appear faint chances as indicated by lead indicators and the F&O data that the Markets may not significantly move down from current levels. There are faint chances that the Markets may once again attempt a pullback while holding on to the current support levels.

The RSI—Relative Strength Index on the Daily Chart is 34.9029 and it does no show any failure swing. However, the NIFTY has made a fresh 14-day low while RSI has not. This is Bullish Divergence. Daily MACD remains bearish while it trades below its signal line. Further on the Candles, An engulfing bearish line occurred (where a black candle's real body completely contains the previous white candle's real body). If the engulfing bearish pattern occurs during a downtrend (which appears to be the case with NIFTY), it may be a last engulfing bottom which indicates a bullish reversal.  The test to see if this is the case is if the next candle closes above the bottom the current (black) candle's real body. Therefore, this needs confirmation.

On the derivative front, NIFTY June futures have added over 11.85 lakh shares or 7.67% in Open Interest. This very clearly suggests that significant short positions have been added. NIFTY PCR stands at 0.83.

Coming to pattern analysis, the Markets have breached its short term double bottom support of 8000. Primarily speaking, this is likely to induce some more weakness in the Markets. However, having said this, there are still faint hopes that the Markets may hold this levels at Close as they still trade within its filter. Further, the lead indicator also indicates a mild bullish divergence while may not allow the Markets to offer any significantly more downside. Candles also show a potential bottom formation. However, all these need confirmation.

All and all, the Markets certainly not out of the woods and might see some more temporary weakness, at least in the initial trade. However, factors like heavy addition in Open Interest indicating shorts, bullish divergence on the lead indicator, and signs of a potential bottom formation on the Candles, offer some hope of a technical pullback even if the Markets continue to remain in an overall downtrend. Cautious outlook should be continued for the day. 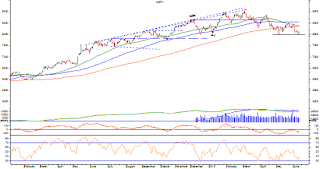 MARKET TREND FOR THURSDAY, JUNE 11, 2015
Markets are expected to open today on a positive note and are most likely to continue with their yesterdays up move. However, most importantly, today’s session will continue to remain a crucial session because the up move that we saw yesterday has been purely on account of short covering. If the Markets are to capitalize on this up move, it will have to move upwards on back of fresh buying as mere short covering will not take it far.

The RSI—Relative Strength Index on the Daily Chart is 41.5782 and it remains neutral as it shows no bullish or bearish divergence or any failure swings. The Daily MACD remains bearish as it still continues to trade below its signal line.

On the derivative front, the NIFTY June futures have shed over 9.70 lakh shares or 5.92% in Open Interest. This very clearly shows that yesterday’s up move has purely been on account of short covering from lower levels.

Coming to pattern analysis, the Markets have, at least as of today, taken support at its double bottom levels of 8000. It would be crucially important for the Markets to maintain itself above this level if it has to once again attempt a reversal. The Markets have immediate resistance at 200-DMA levels. The levels of 100-DMA is too is declining  and is set to cross 200-DMA from above in coming sessions. If this persists, the Markets may find it self in a broad consolidation zone waiting for a confirmed reversal.

Overall, though the Markets ended on a robust note yesterday they are likely to continue their up move today as well; we continue to reiterate caution in the Markets. Until the Markets reports up moves on back of fresh buying, all purchases should be kept limited with very vigilant protection of profits, if any, at higher levels. 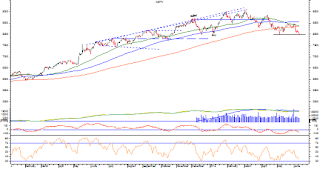 MARKET TREND FOR WEDNESDAY, JUNE 10, 2015
Today, we once again continue to keep the analysis on similar lines that of yesterday. We can expect the Markets to open on a flat note and would expect it to improve as we go ahead in the session. Though the Markets may trade range bound in the initial trade, the levels of 8000 will still continue to act as major support. The decision of MSCI to not to include China A-Class shares will also aid the sentiment as this action would also have impacted Dollar outflows from the Indian Markets.

The RSI—Relative Strength Index on the Daily Chart is 34.0677 and this has reached the lowest value in last 14-days which is bearish. However, it does not show any bullish or bearish divergence. The Daily MACD remains bearish as it trades below its signal line.

On the derivative front, the NIFTY June futures have shed over 1.32 lakh shares or 0.81% in Open Interest. This denotes mild unwinding of positions.

Coming back to pattern analysis, the Markets have nearly tested its double bottom support of 8000 levels and this support level continues to remain a important support – both technically and psychologically. Any breach below this is likely to cause some more weakness in the immediate short term. However, given the lead indicators on the Charts, the F&O data and the currency move suggest that we are very much likely to take support at this level, at least for the immediate short term.

All and all, as mentioned, the Markets will have to maintain itself above the 8000 level in order to avoid any weakness from creeping in. The behavior of the Markets vis-à-vis the levels of 8000 would be crucially important to watch out for. Selective bottom hunting can be done in select stocks as overall the Markets are likely to remain very much stock specific. With expectation of support to hold through, cautious optimism is advised for the day. 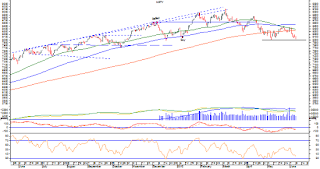 MARKET TREND FOR TUESDAY, JUNE 09, 2015
The Markets are likely to open on a modestly negative to flat note and will look for directions in the initial trade. Though we continue to put the analysis on more or less the similar lines, we also put forward mild possibilities of a attempt to pullback by the Markets given the technical structure of the Chart as well as the F&O Data. In any case, the levels of 8000 will continue to remain import support level to watch out for.

The RSI—Relative Strength Index on the Daily Chart is 34.9571 and it does not show any bullish or bearish divergence. However, it has reached its lowest value in last 14-days which is bearish. The Daily MACD remains bearish as it trades below its signal line.

On the derivative front, the NIFTY June futures have shed 88,200 shares or 0.54% in Open Interest. This figure remains insignificant but it suggest a very mild tinge  of unwinding of positions.

Coming to pattern analysis, the Markets are nearing its support of 7997-8000 levels. Any persistent weakness will see the Markets testing those levels. However, that will also act as a minor double bottom support for the Markets. Given the PCR of 0.87, and given the lower volumes with which it is declining, there are strong possibilities that the Markets may take some sort of at least interim support at this level. Even with some chances of a possible technical pullback, the Markets will have to maintain themselves above 8000-levels in order to avoid any psychological weakness to creep in.

Overall, though the overall structure of the Markets remains weak, it also poses some faint technical possibilities of a pullback. However, it would be imperative for the Markets to maintain itself comfortable above 8000-8050 mark. Any breach will bring in further weakness. Fresh bottom buying may be done but we continue to reiterate to keep overall exposure very low and stock specific.