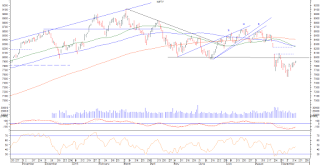 MARKET TREND FOR FRIDAY, SEPTEMBER 18, 2015
Federal Reserve kept the Interest rates unchanged yesterday and the development remained absolutely a damp squib and a non event as the Fed gave no precise indication of the hike in future. Further, the commentary took remained surprising as, in a rare instance, the Fed mentioned possible global slowdown as one of the factors for not hiking rates. Historically, Fed has always remained domestically focussed while commenting on the policy contents. Therefore, we will see a possibly positive opening in the Markets and the trend would again be governed by local factors and technical indicators.

The RSI—Relative Strength Index on the Daily chart is 46.4942 and it has reached its highest value in last 14-days which is bullish. Also, RSI has set a fresh 14-day high whereas NIFTY has not yet and this is Bullish Divergence. The Daily MACD remains bullish as it continues to trade above its signal line.

On the derivative front, NIFTY September futures have shed yet another over 6.88 lakh shares or 3.09% in Open Interest. This clearly indicates that the up move that we saw on Wednesday was purely on account of short covering. The NIFTY PCR stands at 0.95 as against 0.93.

Coming to pattern analysis, the Markets have pulled back once again after making fresh lows in the first week of September. However, as mentioned in our previous edition of Daily Market Trend Guide, the Markets have shown no signs of formation of bottom and have not shown any confirmation of the same. The possible positive opening today will take the Markets once again near their resistance zone of 7960-8000 levels. Unless the Markets show some consolidation and a higher bottom formation and moves past these levels, it would be difficult to see any sustainable rallies in immediate short term. Further, the up moves that we have seen in previous couple of session have come with declining open interest. This shows there has been purely short covering and total lack of fresh buying. Further, the market breadth has been declining as well with each up move which puts a question mark on its sustainability.

All and all, with Fed event behind us, the Markets will once again return to technicals and domestic cues. There are chances that we see positive opening and the Markets may trade with modest gains in the initial trade but we continue to remain vulnerable to sell off from higher levels. This is because of multiple reasons. We have been seeing up moves purely on basis of short covering and there has been very low participation and therefore lack of buying support at lower levels. Also, we still continue to trade below the key resistance zone of 7960-8000 levels. Which chances of intermittent downward bouts from higher levels, we continue to reiterate very cautious stand on the Markets. 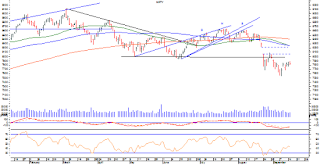 MARKET TREND FOR WEDNESDAY, SEPTEMBER 16, 205
Aided by positive global cues, the Markets are likely to open on a decently positive note and trade with gains in the initial trade. However, tomorrow being a trading holiday and with the pending FOMC decision on rate hike in the US, we are likely to see larger degree of caution prevailing in the Markets. This may cause the Markets come under some pressure, especially in the second half of the session. Even if we do not see any downsides today, any higher opening and trading levels will continue to keep the Markets vulnerable to selling bouts from higher levels.

The RSI—Relative Strength Index on the Daily Chart is 43.1599 and it remains neutral as it shows no bullish or bearish divergence or any failure swings. The Daily MACD remains bullish as it trades above its signal line.

On the derivative front, the NIFTY September futures have shed 81,675 shares or nominal 0.37% in Open Interest. This is no indication of any major shift in directional psyche of the Markets.  The NIFTY PCR stands at 0.93 as against 0.94 yesterday.

Coming to pattern analysis, the Markets have formed near parallel bars, and if not a perfect parallel bars on the Daily Bar Charts. This indicates that after forming a lower low earlier this month, the Markets have pulled back but have formed lower high so far. Also, speaking on little broad terms, the Markets are still trading below its key resistance zones of 7960-8000 levels. Every move that takes the Markets near to these levels has met with some selling pressure. All this has happened without volumes and lack of buying at higher levels.

All and all, the Markets hover with uncertainty so far as interest rate hike decision in US is concerned. Also, with a trading holiday tomorrow, it will not be surprising if the Markets remain ranged or face some pressure at higher levels post opening. It would be grossly important for the Markets to capitalize on its expected opening gains. Overall, the continuation of having very modest and selective exposure with more conservation of cash is advised for today. 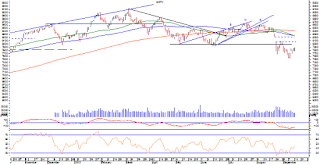 MARKET TREND FOR TUESDAY, SEPTEMBER 15, 2015
Markets are likely to open on a flat to mildly negative note and look for directions. Today’s analysis remains more or less on similar lines like yesterday. The reason being, the up move that we witnessed has been due to more or short covering and therefore with each higher levels, the Markets continue to remain vulnerable from selling bouts. Even if we witness some better opening and the Markets inches upwards, it will still continue to trade below its key resistance zones.

The RSI—Relative Strength Index on the Daily Chart is 44.7551 and it has reached its highest value in last 14-days which is bullish. The RSI has set a fresh 14-day high while NIFTY has not yet and this is bullish divergence. The Daily MACD remains bullish as it trades above its signal line.

On the derivative front, the NIFTY September futures have shed over 3.47 lakh shares or over 1.53% in Open Interest. This clearly indicates that short covering took place yesterday. The NIFTY PCR stands at 0.94 as against 0.93 yesterday.

Coming to pattern analysis, the Markets are attempting to form base but have shown no signs of confirmation so far. Even as the lead indicators suggest, it may continue to inch upwards but the up moves shall be more or short covering than any fresh buying. The absence of fresh buying and lower volumes that we have been seeing with continue to keep the Markets vulnerable to sell offs from higher levels. Also, as of now the Markets continues to trade below its key resistance zones of 7960-8000 levels. As the Markets approaches these levels, the likelihood of the Markets facing resistance at these levels also increases.

All and all, the Markets might continue to inch upwards and post some more modest gains but all of these up moves should be utilized more to book profits on positions taken at lower levels. Fresh buying should be kept very restricted until the Markets show some directional bias and shows some confirmation of finding its base. Until this happens, highly cautious approach with conservation of cash is advised. 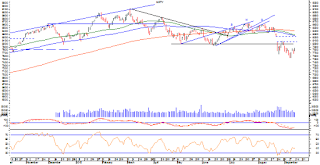 MARKET TREND FOR MONDAY, SEPTEMBER 14, 2015
Markets are expected to open on a modestly positive note and look for gains at least in the initial trade. The Markets are expected to have a volatile week for number of reasons. Though the IIP numbers that came out on Friday pleasantly surprised, the WPI data is slated to come out later today and the Markets have a holiday on 17th of September and will also resume Friday reacting to the rate-hike stance of FOMC. Technical speaking, the
Markets continue to show a technical pullback but is yet to show any signs of bottom formation.

On the derivative front, the NIFTY September futures have shed 55,200 shares or 0.24% in Open Interest. This is a nominal change and does not indicate any major shift of positions on Friday. The NIFTY PCR stands at 0.93 as against 0.95.

Coming to pattern analysis, the Markets have created a gap in the end of August and formed its lows. In the subsequent pullback, the Markets failed to fill up that gap and went on to form fresh lows again in the first week of September. After this, the Market shave attempted a pullback once again but it still continues to trade below its key resistance zone of 7960-8000 levels. For the Markets to confirm a bottom, it will have to move past this resistance zone and fill up the gap created between 8064-8224 levels. These are little broad range but until the Markets moves past this resistance zone of 7960-8000 and attempts to fill up this gap, it will remain vulnerable to selling pressures at higher levels. On the Weekly Charts, the Markets have closed a notch above its 100-DMA and this level is likely to act as support on Close levels as well.

All and all, the Markets continue to remain in broad trading range. It is showing attempts at bottom formation but has shown signs of any confirmation so far. The technical fabric of Daily as well as Weekly Technical Charts continues to show vulnerability of the Markets at higher levels, especially at its key pattern resistance zones. Keeping this in view, it is advised to continue to hold not more than modest positions while very vigilantly protecting profits at higher levels.