BRIEF MARKET FORECAST FOR THE DAY
Today, expect the Markets to see a weaker and near gap-down opening and trade weak in the initial trade. The Markets are expected to test its 50-DMA of 7602 and might well slip below it that well. The behavior of the Markets vis-a-vis the levels of 50-DMA would be crucial and it would be important to see if this level is maintained at Close levels.

The RSI--Relative Strength Index on the Daily Chart is 49.4895 and it is neutral as it shows no bullish or bearish divergences or any failure swings. The Daily MACD remains bearish as it trades below its signal line.

Being bearish in the immediate short term was imminent for the Markets as we have been mentioning that it is in the "Broadening Formation" which has bearish implications and it is also one of the reversal formations. Today, it is advised to refrain from making any fresh purchases and protect profits where ever applicable. Overall, high degree of caution is advised for today. 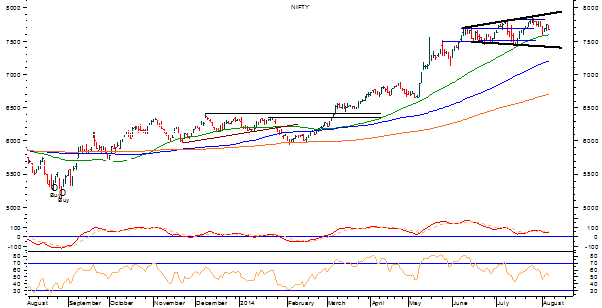 Today, expect the Markets to once again open on a quiet note and look for directions. Though intraday trajectory would be crucially important to decide the trend for today, the overall session is likely to remain in a range while the Markets continuing to resist at certain pattern resistances while remaining in the broadening formation.

The RSI—Relative Strength Index on the Daily Chart is 50.99 and it has reached its lowest levels in last 14-periods. Though it does no show any bullish or bearish divergence. The Daily MACD continues to remain bearish as it trades below its signal line.

On the derivative front, NIFTY August futures have added 6.06 lakh shares or 4.62% in Open Interest. This shows that some fresh shorts have been added in yesterday’s decline that has led to increase in open interest.

Overall, it is continued to be advised to protect profits at higher levels vigilantly. Stock specific approach should be maintained as selective out performance would continue. Still, overall exposures should be curtailed. While maintaining adequate liquidity, cautious outlook is advised for the Markets. 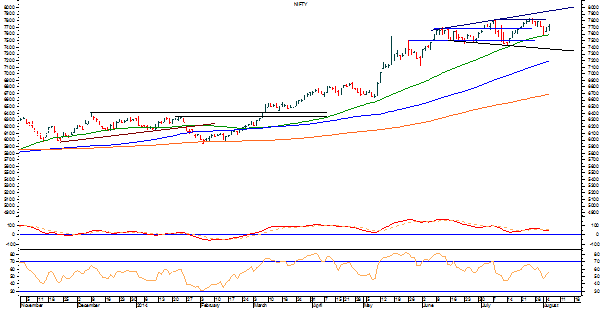 Today, expect the Markets to open on a quiet and mildly negative note and take some breather from the advances that it has been making. We can expect the Markets to open on a mildly negative note and in attempt to recover in the later stage meet some of its pattern resistance levels. Some consolidation is expected to take place again and we can see some intermittent bouts of profit taking again.

The RSI—Relative Strength Index on the Daily Chart is 56.1588 and it is neutral as it show no bullish or bearish divergence or any kind of failure swing. The Daily MACD continues to remain bearish as it trades below its signal line.

On the derivative front, NIFTY August futures have added over 3.74 lakh shares or 2.93% in Open Interest. The NIFTY PCR stands at 0.87 as against 0.86 yesterday.

Going by the pattern analysis, the Markets continue to remain in overall “Broadening Formation”. Therefore, the overall behaviour of the Markets is likely to change. We would no live more in the era of technical pullbacks than fresh breakouts until the Markets moves past previous highs that it has formed. While continuing to encounter pattern resistances, the volumes remain typically low in pullbacks under such structure.

Overall, the Markets are likely to see a subdued opening today. Following quiet opening, it would be important to guard profits at any higher levels very vigilantly. Fresh purchases may be made selectively as sectoral out performance would be seen. While maintaining adequate liquidity, neutral outlook for the Markets is maintained for today. 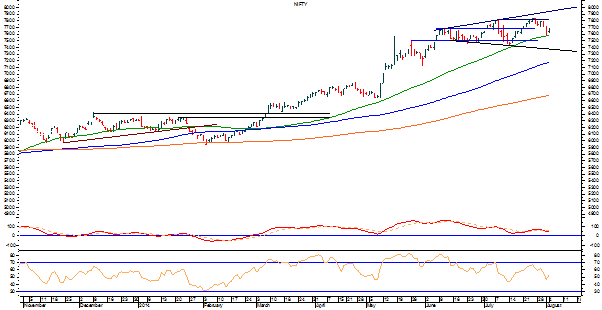 Today, expect a total flat start to the Markets. The Markets are expected to open on a quiet note and look for directions. What we have seen yesterday was a technical pullback, though it has come on lower volumes. The Markets continues to remain in its original pattern mentioned in our yesterday’s edition of Daily Market Trend Guide. Further, today, RBI would announce its credit policy later in the day and we would see the Markets reacting to it.

The RSI—Relative Strength Index on the Daily Chart is 52.3743 and it is neutral as it shows no bullish or bearish divergence or any kind of failure swings. The Daily MACD remains bearish after it reported a negative crossover yesterday and now trades below its signal line.
On the derivative front, NIFTY August futures have added over 2.75 lakh shares or 2.21% in Open Interest. This shows some fresh longs have been added in yesterday’s trade.

The Markets continue to remain in broadening formation, going by the pattern analysis. However, the volumes show a very definitive indications in such cases. Though we continue to see technical pullbacks of the likes that we saw yesterday, they come with much lower volume. Yesterday as well, the volumes have hardly remained average. The Markets would continue to meet its pattern resistances while attempting to move upwards. Though immediate and intermittent pullbacks may be seen, one should heavily guard against continuation of correction which can resume any moment once again if the Markets resists at certain levels.

Overall, we would continue to see some stock specific activities and the Markets would also react to the RBI coming up with the credit policy. Though any change in Repo Rate, CRR or SLR has been widely ruled out, it is likely to keep the session volatile. We continue to remain light on overall exposures and continue to maintain adequate amount of liquidity and caution in the Markets for today. 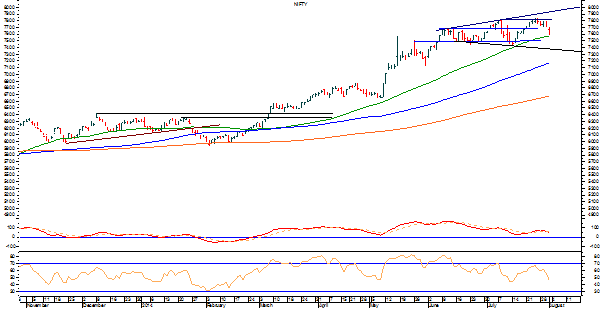 Today, we can expect a pullback from the Markets and expect it to open on buoyant note. It is important to note that we have been reporting a “Broadening Formation” on the Daily as well as Weekly Charts and this is a classical reversal formation. Within this formation, the Markets would continue to post intermittent pullbacks. Today as well, we can expect a positive start to the Markets.

The RSI—Relative Strength Index on the Daily Charts is 46.8887 and it remains neutral with no bearish or bullish divergences or any failure swings. The Daily MACD stands bearish as it has reported a negative crossover today and it now trades below its signal line. On the Weekly Charts, RSI has just crossed below its topping out formation which is bearish. Also, Weekly RSI has reached tis lowest value in last 14-periods and this is bearish. Further, RSI has set a new Weekly low whereas NIFTY has not yet and this is clear Bearish Divergence on the Weekly Charts. The Weekly MACD still remains bullish trading above its signal line.

On the derivative front, NIFTY August futures have shed 7.44 lakh shares or 5.63% in Open Interest and this is clear indication that offloading has been seen on Friday’s session and no shorts have been freshly created.

All and all, positive and strong opening expected today. It would be important to see if the Markets sustains this opening and capitalizes on that. Any purchases, if any, should be made selectively. In coming immediate short term, one will have to rely heavily on individual stock specific performances. Overall, cautiously positive outlook is advised for today.