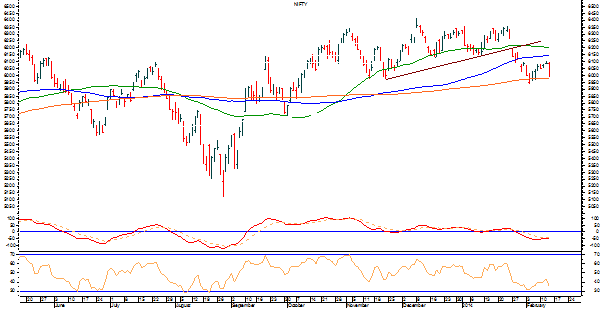 The biggest solace in yesterday’s session what that the volumes across the board has remained lower than average. Taking this into account, and from relatively favourable global cues, we are expected to see a positive opening today. The Markets are expected to open on a positive note and decently hold on to its 200-DMA support. A technical pullback is likely today.

For today, the levels of 6050 and 6115 are immediate resistance on the Daily Chart. The support exists at 5980 at Close levels.

The lead indicators show resilience to the weakness and this is little positive. The RSI—Relative Strength Index on the Daily Chart is 35.8270 and it is neutral as it does not show any bullish or bearish divergence or any failure swing. The Daily MACD, though it continues to remain bearish as it trades below its signal line, is very much likely to report a positive crossover if the Markets do not breach any major supports.

On the derivative front, the NIFTY February futures have added over 11.30 lakh shares or massive  7.25% in Open Interest. This signifies that there has been addition of big shorts into the system.

Going by the pattern analysis, the Markets have not breached its major support of 200-DMA at close. Even if it pares all of its opening gains and dips below this level, this level is likely to continue to act as major support at Close. Further, given the shorts positions that exist in the Markets, there are high chances that the Markets finds supports at these levels.
All and all, we are likely to see respite from the weakness that we saw yesterday. There has been no structural breach on the Charts and given the pattern analysis and the F&O data, there are high chances of the Markets taking support at these levels again. It is strongly advised to maintain adequate liquidity and remain light on the positions while maintaining a positive outlook for today. 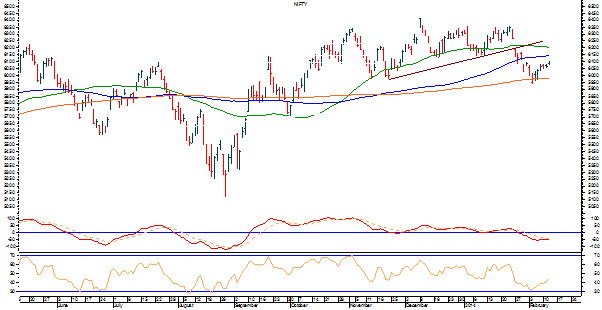 The December IIP data and the January CPI data that came in yesterday are more or less in line with the what the Markets expected though the December IIP contracted little bit more at -0.6% as against expectation of -0.1%. The Markets have overall discounted this data and no major reaction to this should be seen. The Markets will open again on a quiet note attempting for find direction. Absence of volumes and conviction are keeping Markets in this condition.

The lead indicators continue to remain in place. The RSI—Relative Strength Index on the Daily Chart is  43.3285 and it continues to remain neutral as it shows no bullish or bearish divergences or any failure swings. The Daily MACD continues to trade below its signal line but is moving towards a positive crossover.

On the derivative front, NIFTY February futures have shed over 3.87 lakh shares or 2.44% in Open Interest. This signifies some short covering in the Markets in yesterday’s session. This is likely to keep the Markets in the consolidation zone for some more time. It would be very important to see if this gets replaced with fresh buying.

The Markets have been inching upwards in past couple of session but the main concern that has remained in this pullback has been the lack of volumes. The low level participation on the days when the Markets are rising reflects the lack of directional bias and lack of consensus. Given this thing, it is likely that the Markets remains in consolidation for some more time. It has major resistance near 6150 levels in form of a pattern resistance as well as 100-DMA. To confirm the reversal of the trend, the Markets will have to move past the levels of 6150 with volumes and conviction.

All and all, while keeping the analysis on the similar lines, we continue to advice to refrain from creating aggressive positions on either side. While protection of profits would be extremely important, purchases may be done very selectively. It is advised to maintain adequate liquidity until the directional bias is achieved while maintaining a positive caution on the Markets. 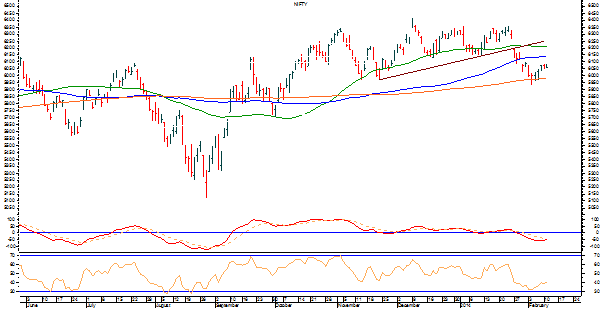 After pulling back from its lows of 5933 levels, the Markets have spent the last three sessions while consolidating in a much capped range. Today, we can expect the Markets to open on a decently positive note and continue with its up move. However, as outlined in our previous editions of Daily Market Trend Guide, it would be important for the Markets to maintain these opening gains and capitalize on it. With December IIP data and January CPI data coming in after Market hours, the Markets are again set to spend the day in a range.

The lead indicators continue to remain in place. The RSI—Relative Strength Index on the Daily Chart is 40.3487 and it continues to remain neutral without showing any failure swings or any kind of bullish or bearish divergences. T he Daily MACD trades below its signal line.
On the derivative front, the NIFTY February futures have added over 4.80 lakh shares or 3.11% in Open Interest. This shows that some fresh positions have been added in yesterday’s trade and the Markets are likely to continue with its up move, at least in the initial session.

As mentioned above, the Markets have been consolidating for last three sessions after its pullback. Going by the pattern analysis, the Markets are likely to inch upwards towards its 100-DMA levels and again face some resistance and consolidation. It would confirm its trend reversal only after it moves past its 100-DMA with volumes and good amount of participation.

All and all, it is continued to advise to keep avoiding aggressive positions in the  Markets. Heavy exposures should be avoided. Any rise should be used to  book profits wherever it exists and making highly selective purchases. Both profits and amount of exposures should be heavily guarded until the directional bias is clearly established. Overall, continuance of positive caution is advised for today. 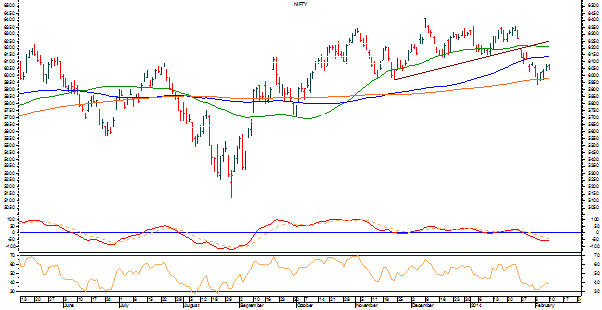 The lead indicators continue to remain in place. The RSI—Relative Strength Index on the Daily Chart is 39.0534 and it remains neutral without showing any bullish or bearish divergences or failure swings. The Daily MACD remains bearish as it trades below its signal line but it is moving towards reporting a positive crossover.

On the derivative front, the NIFTY February futures have added 41,650 shares or 0.27% in Open Interest. The Open Interest figures have remained unchanged and this remains a positive sign which signifies that no major offloading has been seen in yesterday’s session.

The Markets have attempted a trend reversal and it is consolidating after its recent pullback from its 200-DMA. To further strengthen this attempt of pullback, it will have to resume its up move and at lest test its 100-DMA levels near 6150, and then move on to confirm the reversal of the trend. During this entire process, the volumes would be very critical. Any up move should be accompanied by volumes in order to sustain at higher levels.

All and all, like yesterday, stock specific actions would continue. It is advised to continue to remain light on the positions at protect profits wherever possible until the directional bias gets clear. Very selective purchases may be made. Overall, cautious optimism is advised for today.